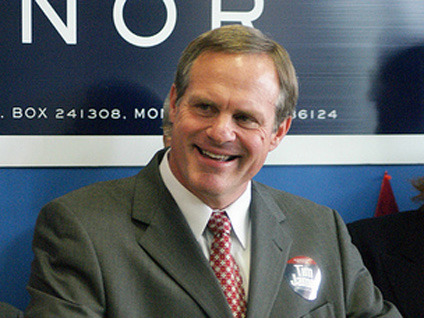 As Arizona's new immigration law has sparked criticism that it would target illegal and legal immigrants alike, one Alabama candidate for governor is betting he can win votes by bringing immigration-related issues to the forefront in his own state.

"This is Alabama," James says. "We speak English. If you want to live here, learn it. We're only giving that test in English if I'm governor. Maybe it's the business man in me, but we'll save money. And it make sense."

After receiving negative attention from liberal bloggers for the ad, James released a statement yesterday expounding his logic.

"We welcome non-English speaking people, who are legally in the U.S., to Alabama. However, if you want to drive in our states, public safety concerns dictate that you need to speak English," James said. "Political correctness may endear you to the Rachel Maddow crowd, but here in Alabama, the safety of our people comes first."

James' statement said it is important for the nation's governors to protect the interests of states as President Obama and Democrats in Congress press for more "permissive" immigration laws.

The issue of printing driver's licenses in different languages could be a legitimate issue, writes CBS News Chief Political Correspondent, the Atlantic's Marc Ambinder, "but the ethnic coding in the ad is unmistakable, especially because it's not the type of thing that voters in Alabama would care about unless someone deigned to bring it to their attention."

Ambinder also points out that Alabama could lose billions of dollars in federal transportation funding if it were to stop printing the exams in different languages.