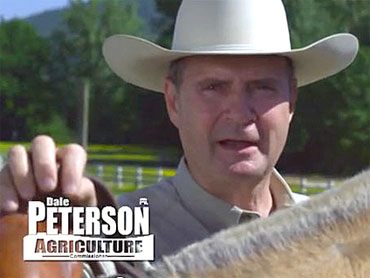 For connoisseurs of memorable political ads, there's simply no place like Alabama - at least in this campaign cycle. (Eat your heart out, Demon Sheep.)

Now we have a must-watch spot from Dale Peterson, who is running in the Republican primary for Alabama Agriculture Commission. While that obscure-sounding office might invite expectations of restrained campaign rhetoric, don't be fooled: Dale Peterson wants you to know that he's taking no prisoners.

In the spot, Peterson, speaking in the staccato style of an angry drill instructor, expresses outrage over the "thugs and criminals" who are trying to "keep you in the dark" in order to "do whatever they want" with the commission's billions of dollars.

"They don't give a rip about Alabama," Peterson exclaims, anger rising.

A horse by his side, Peterson complains of "illegals bussed in by the thousands" and accuses opponents of "stealing yard signs in the dark of night from my supporters." He goes on to complain that one has been "bragging about receiving illegal money on Facebook."

"Who on earth would support such a dummy?" he asks, as the camera cuts to a close up of the horse's face.

"We're Republicans," Peterson adds, pulling a Winchester out. "We should be better than that." Before walking away with the horse, he vows to "name names and take no prisoners."

The spot then closes, as it opens, with a shot of Peterson's dog tags and Marines badge resting on top of the Constitution.