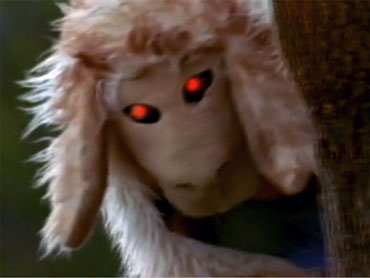 (FCINO/youtube)
It's early, but it appears we have a frontrunner for most astounding political ad of 2010. Check out this new spot from "Carly for California," Republican California Senate candidate Carly Fiorina's campaign organization.

The spot is an extended attack on Fiorina primary opponent Tom Campbell. It's long and drags a bit in the middle, so if you're short on time, watch the first 30 seconds and then skip to the 2:20 mark, after which things start to really get crazy. (Oh, and don't ignore the amazing background music.)

The spot sparked widespread mockery Wednesday on political Web sites, including Politico and Wonkette. Quipped one YouTube commenter: "This might be the single greatest/stupidest video I have ever seen in my entire life."

Enjoy below. And feel free to explain what's going on. We think the sheep are supposed to be fiscal conservatives, but just like David Lynch's classic tv series "Twin Peaks," this one's open to interpretation.

UPDATE: Two of Fiorina's opponents are trying to use the video to their advantage, with one -- Chuck DeVore -- offering up the "Society for the Eradication of Demon Sheep From our Political Discourse." Read about it here>.

UPDATE 2: The man behind the video is Republican political consultant Tom Davis, aka "Hollywood." Check out an earlier can't-miss video from Davis (featuring a giant marauding rat) here.