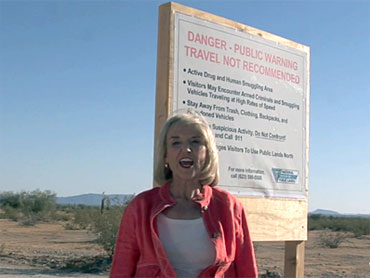 Republican Arizona Gov. Jan Brewer, who is up for re-election this year, is up with a new web ad that excoriates President Obama for new federal signs in the Arizona desert warning visitors about illegal activity.

The governor, who has publicly challenged the Obama administration on the issue of immigration a number of times, appears in the ad next to the signs, about 80 miles from the U.S.-Mexico border and about 30 miles from the state capitol.

The signs carry messages such as, "smuggling and illegal immigration may be encountered in this area."

"This is an outrage," Brewer says in the ad. "Washington says our border is as safe as it has ever been. Does this look safe to you?"

Brewer continues, "We will not surrender any part of Arizona. We need to stand up and demand action."

The governor says that "Washington is broken" and asks Mr. Obama to "do your job."

The Bureau of Land Management says the signs were erected at the suggestion of local ranchers after a rash of violence related to drug and human smuggling in the area, CBS affiliate KPHO reports. Federal Law Enforcement Rangers began reporting increased danger in the area a year ago, according to KPHO. The area covered by the signs includes the location where a veteran sheriff's deputy was shot and wounded in April after encountering a group of suspected illegal immigrants.

Brewer brought the debate over immigration to the forefront of national politics this year when she signed into law a controversial immigration measure, which makes illegal immigration a state crime and that some say could lead to racial profiling.

President Obama called the Arizona law "misguided" but promised to deploy an additional 1,200 National Guard troops to the Southern border, including more than 500 in Arizona. After a 90-minute briefing by federal officials on Monday, Brewer said the promised troops were not enough, the Associated Press reports.

Mr. Obama is scheduled to make a speech about immigration reform this Thursday.