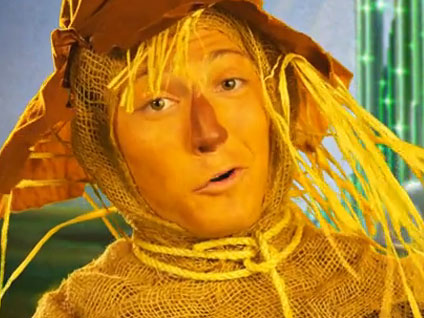 With the primaries now past, Democrats and Republicans can turn their attention to yelling and screaming at each other. There are, again, more ads than we can possibly get to this week, so here are the top 5 that we've determined best tell the story of what's happening out there in TV-land.

Number one, is an ad that shows how some Democrats will run against their Tea Party backed Republican opponents - using their own words against them - a classic political tactic. We are seeing the same thing in Nevada as Harry Reid is using Sharron Angle's past speeches and now, the trend has come to Kentucky, where Democrat Jack Conway is attacking Republican Rand Paul.

The ad starts asking the viewers to listen to Rand Paul and then shows Paul on a Kentucky television program a few years ago. "I'm for having crimes and having laws against things that are violent crimes, but things that are non violent shouldn't be against the law," says Paul.

The ad goes to various state wide Police officials, who have endorsed Conway, to rebut Paul.

The ad ends with Conway giving his stamp of approval to the ad and then adding "Count on me to protect Kentucky."

#2. If only we could describe this ad in 140 characters or less.

It starts with 2 women having a solemn conversation about Iowa Republican Senator Chuck Grassley.

"I heard Chuck Grassley has a twitter," says the first. "Oh, can it be cured?" says the second.

Grassley appears to set them straight: "Oh, not that kind, I like to use to new technologies like Twitter and Facebook just to keep in touch," he says. "I'll tweet, I'll text, I'll do whatever it takes, I work for you," he says.

For number three, we go out west to California, where the top races in the state are defined by a single theme: who's better qualified to solve the nation's economic woes -- business people or career politicians.

This ad is from Democratic Sen. Barbara Boxer who is going after Republican Carly Fiorina, the former CEO of computer giant Hewlett Packard, and trying to use Fiorina's past statements and record as CEO against her.

The ad begins with the announcer in the usual attack ad tone: "As the CEO of HP, Carly Fiorina laid off 30,000 workers." Cue Fiorina on tape: "When you are talking about massive layoffs, which we did, perhaps the work needs to be done somewhere else," she says in a clip from an interview.

Back to the announcer: "While Californians lost their job, Fiorina tripled her salary, bought a million dollar yacht and five corporate jets."

Fiorina again on camera: "I'm proud of what I did at HP"

"Carly Fiorina, outsourcing jobs, out for herself," says the announcer.

Number four takes us to a hotly contested House race in Texas, the 17th District which includes suburban Dallas. Ten-term incumbent Democrat Chet Edwards is being attacked by his GOP opponent Bill Flores for his record.

Over a montage of various Edwards television ads, the announcer says "What do most of Chet Edwards's TV ads say about his voting record in Washington?"

After adding that Edwards voted with Pelosi 96 percent of the time, the announcer comes back with this somber, but hard hitting statement: "Our congressman has changed, it's time to change our congressman."

Somewhere Over the Rainbow

Did you know that Speaker Nancy Pelosi has a Republican challenger? Businessman John Dennis knows it's an uphill battle to win in liberal San Francisco, but he wants to get his free-government message out.

Dennis says he and a radio director friend came up with the idea of doing movie-themed political advertisements. They hired professional actors to perform in ads like this -- a political Wizard of Oz -- that starts with the lion, tin man and scarecrow wishing they could find politicians with a brain, a heart, or courage.

Then, Dorothy looks into the camera and says "I don't care about political parties, I just want a home that isn't blown away by debt."

Cue an explosion and Hank Paulson appears as the wizard threatening to put them in debt for generations. Then, an actor playing Nancy Pelosi appears as the wicked witch of the west flying in on her jet yelling "Hello my pretties!"

Long story short, Pelosi says she will save them from "evil Republicans" if they pay her $18,000 for her downtown office and go into massive debt for Wall Street bailouts. All of a sudden, before Pelosi's monkeys can attack Dorothy and friends, candidate John Dennis arrives and throws water on Pelosi as she yells "I'm melting!!" Dorothy is very grateful and John Dennis tells them he's running for Congress.

"I believe it's time to throw a little water on politicians who say one thing and do another. Like Nancy Pelosi" he says. Dennis tells us that his next ad will have a James Bond theme.

This week's honorable mention comes from the Colorado governor's race, where third-party candidate and former GOP Representative Tom Tancredo is attacking the GOP nominee, Dan Maes. You just have to watch.

Don't forget to vote for your favorite below - last week's winner was Kendrick Meek with his upbeat introduction to the voters of Florida.