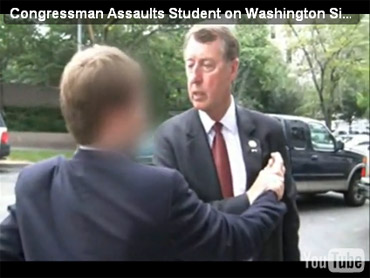 North Carolina Rep. Bob Etheridge, the Democratic Congressman who appeared to hit a camera being wielded by a self-identified student who approached him on the street asking questions, has apologized for what he calls his "poor response" to the situation.

"I have seen the video posted on several blogs," Etheridge said in a statement. "I deeply and profoundly regret my reaction and I apologize to all involved. Throughout my many years of service to the people of North Carolina, I have always tried to treat people from all viewpoints with respect. No matter how intrusive and partisan our politics can become, this does not justify a poor response. I have and I will always work to promote a civil public discourse."

In the video, Etheridge is approached by two camera-wielding men who ask if he "fully supports the Obama agenda." A visibly agitated Etheridge responds to one, "Who are you?" He repeats the question and appears to slam his camera with his hand.

In the edited video, as Hotsheet reported earlier today, Etheridge is then shown holding the wrist of one of the questioners and repeatedly asking him to identify himself.

The two people will only identify as students and say they are "just here for a project." In the video, the face of the student in the shot with Etheridge is blurred.

"I have a right to know who you are," the congressman says, holding one man's arm. The pair refuse to tell him where they are from and repeat that "all we are is students."

Etheridge then grabs one of the self-identified students by the neck and pulls him next to him, apparently so that his face will appear on camera.

"Bob Etheridge has lost it," National Republican Congressional Committee spokesman Jon Thompson said in a statement. "His conduct is unbecoming of a member of Congress. It's bad enough that he's joined Obama's assault on North Carolina jobs, but his physical assault on a college student goes beyond the pale."

The person who posted the video goes by the name "DCCameraGuy" on YouTube but is not identified beyond that.

The video garnered attention after being posted on Andrew Breitbart's Big Government website, which first posted the undercover videos of ACORN employees that resulted in significant damage to the community group.

"No matter how partisan and no matter how difficult things get sometimes, that's no excuse for my response," he said. "I came today to say I'm sorry."

Etheridge said the confrontation happened after he came out of a meeting in Washington, D.C.

"The truth is, I had a long day, it was the end of the day -- but that's not the issue," he said. "I've been through a lot of tough situations... I've been spat at, pushed on and threatened before, and that's no excuse for... not walking on by."

Etheridge said he still did not the identity of the students in the video. Asked whether he thought Republicans set up the confrontation, he responded, "I'll let you find that out. Maybe somebody will, I'm not going there."

The Democratic National Committee is going there, Politico reports.

"Motives matter, and I think you can see who was behind this," DNC spokesman Brad Woodhouse told Politico. "This was a Republican party tracking operation. If it wasn't a party tracker or intern, why is the face blurred and why is the source hidden? You know if it had been a right wing blog, they'd identify themselves and they'd be booking this person on TV all day... If that doesn't tell you this is a Republican Party hatchet job nothing will."