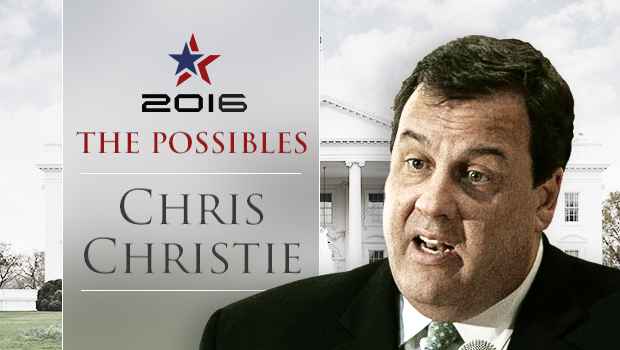 If Republicans are looking for a nominee in 2016 who relishes the hand-to-hand combat of politics and brings an unapologetic personality to the campaign trail, they need look no further than New Jersey Gov. Chris Christie.

Christie is admired by many for his willingness to flout his naysayers and tell his hecklers to shut up. But that brashness can also land him in hot water: it has been difficult for Christie to cast off suspicion that he was behind a plot to close lanes on the George Washington Bridge in an apparent act of political retaliation against the Democratic Mayor of Fort Lee, New Jersey - a scandal known by the shorthand, "Bridgegate."

Christie's national ambitions have been apparent for some time, and he spent time raising his profile among both donors and other politicians as the head of Republican Governor's Association. He launched a political action committee called "Leadership Matters PAC" that will allow him to raise money for other candidates and travel the country and can be a precursor to a presidential campaign.

What he's known for

Christie, like so many politicians, started his career as a lawyer the firm of Dughi, Hewit & Palatucci after getting his law degree from Seton Hall University in 1987. Politics was in his blood, though: he served as president of both his high school class and the student body at University of Delaware, his undergraduate alma mater. His foray into professional politics was a bit rocky: his first campaign, a primary challenge to the left of Republican state senator John Dorsey in 1993, ended with Christie getting thrown off the ballot over a legal challenge to his eligibility.

He had more success in 1994, winning election as a freeholder in Morris County. He took another shot at a New Jersey Assembly seat in 1995, running once again as the outsider candidate. He lost, and put his political ambitions on hold for a while. In 1999, still at his law firm, he registered as a lobbyist.

After helping to raise money for George W. Bush's presidential campaign in 2000, Christie was appointed the U.S. Attorney for the District of New Jersey. He made public corruption a high priority, and upon stepping down in 2009, the New Jersey Star-Ledger praised his "amazing record" of 130 convictions and zero acquittals for the public officials his office indicted.

The post as U.S. Attorney would give Christie the launching pad for his first gubernatorial bid in 2009, where he challenged Democratic Gov. Jon Corzine. Christie ran as an outsider, promising to bring his focus on public corruption to the governor's office and curb the power of special interests.

He won by three points, becoming a rare Republican governor in a blue state working with a Democratic legislature. During his first term, Christie was able to work with the legislature to cut deals to increase public employee contributions to their pensions and health insurance, end collective bargaining over health care, and limit the growth in property taxes.

"He's made an effort and has achieved bipartisanship and he will cite a number of examples or some evidence of that," Ruth Mandel, the director of the Rutgers University Eagleton Institute of Politics, told CBS News.

At the same time, New Jersey has seen its credit rating slashed multiple times by ratings agencies as a result of its budget shortfalls and unfunded pension costs. There are also lingering complaints over the disbursement of federal aid in the wake of Hurricane Sandy.

Still, Christie won his second campaign in 2013 against Democrat Barbara Buono by a landslide, garnering 60 percent of the vote to her 39 percent. Less than two months after he was re-elected, however, texts and emails implicated several Christie aides and political appointees in the orchestrated lane closures of the George Washington Bridge in Fort Lee, New Jersey, the previous September as an apparent act of retaliation against the city's Democratic mayor. He had declined to endorse Christie's re-election bid.

Christie fired a top aide and said he had no knowledge of the incident. An internal investigation he ordered backed up his story, but there are still pending investigations by both the New Jersey legislature and federal prosecutors.

Christie's personal predilections have often made news, too. He was in the headlines recently for traveling by private jet to attend a Dallas Cowboys game with owner Jerry Jones, who dubbed Christie (and his orange sweater) the team's "mojo." He would later attend the Cowboys-Packers NFL playoff game on his own dime to avoid further scrutiny, since the private jet rides and prime owners suite tickets were a possible violation of New Jersey ethics laws.

Christie also has a well-documented and very public love of Bruce Springsteen, who hasn't always returned his affections.

Same-sex marriage: Like most Republicans who considering a presidential bid, Christie opposes same-sex marriage. Unlike the other potential candidates, however, he's faced a real-world situations where he needed to act on the issue. In 2012, Christie vetoed legislation that would have allowed same-sex marriage in the state, arguing that voters should be able to decide the issue in a referendum. But when the New Jersey Supreme Court upheld the decision of a state judge who ruled to legalize marriage between gay couples, Christie dropped his pledge to appeal the ruling. The move was politically astute in the more socially liberal New Jersey, but could prove problematic in conservative strongholds like Iowa and South Carolina.

Abortion: Once upon a time, Christie was a pro-choice Republican, and even ran on that platform during his failed 1995 New Jersey Assembly bid. He ultimately dropped his pro-life stance, and told CNN in 2012 that hearing the heartbeat of one of his daughters in the womb during his wife's ultrasound in 1995 changed his mind. "I've been pro-life ever since," he said. Now, it's a title he wears proudly: "I can assure you that being pro-life is not a political liability anywhere in America," Christie said during a recent conservative confab in Iowa.

Immigration: He has taken pains to avoid discussing immigration, a hot button issue, unless it directly impacts New Jersey. But he has weighed in a few times: After former Texas Gov. Rick Perry said it was "heartless" not to support giving in-state tuition rates to the children who were brought to the U.S. illegally, Christie said that was actually a "commonsense position." But in December 2014, he reversed course and signed a bill doing just that. And in 2010, he said on ABC that Congress should secure borders and "put forward a commonsense path to citizenship," but would later say it wasn't his prerogative as governor to decide a national policy.

Education: Christie is one of the only potential Republican candidates - former Florida Gov. Jeb Bush being the other - who has not totally reversed course on support for the Common Core educational standards in the face of widespread opposition among the GOP base. "This is one of those areas where I have agreed more with the president than not," Christie said at 2013 conference for KIPP Public Charter Schools. And he hasn't been shy about criticizing others in his party for opposing the standard. "I think part of the Republican opposition you see in some corners in Congress is a reaction, that knee-jerk reaction that is happening in Washington right now, that if the president likes something the Republicans in Congress don't. If the Republicans in Congress like something, the president doesn't." He did, however, sign an executive order last July creating a commission to review the standards and make recommendations about testing. He has pushed for New Jersey to adopt a school voucher program.

Gun control: During his first campaign for state Senate in 1993, Christie criticized Dorsey, the Republican state senator he sought to oust, for seeking a repeal of the New Jersey's assault weapons ban. Now, things are different. While New Jersey still has some of the toughest gun laws in the country, Christie isn't looking to make them any less tough. In July 2014, Christie vetoed a bill that would have reduced the legal number of rounds for an ammunition magazine from 15 to 10, even under pressure to sign it from the parents of students killed at Sandy Hook Elementary School.

Why Republicans may think twice

Christie's gift for telling it like it is (in his opinion, at least) could be his potential downfall in a campaign.

"His strength is that he's very strong in his convictions on what he believes in and he's a very emphatic speaker," GOP strategist Ron Bonjean told CBS News. But, he added, "Just as he is so firm in his convictions, he has to be careful not to let this argumentative side get the best of him, which can come off sometimes as bullying."

Bonjean said Christie is learning to moderate his temperament, pointing to his appearance at the recent Iowa Freedom Summit where he addressed the issue of his being "too Jersey" with humor.

"Now, let me ask you this. If I was too blunt, too direct, too loud, and too 'New Jersey' for Iowa, then why do you people keep inviting me back?" Christie said. "And even more importantly, if the values I'm fighting for every day in New Jersey, and all across this country, are not consistent with your values, then why would I keep coming back? I wouldn't. I do, because our values are consistent and we're fighting together to make this a better country."

His convictions also occasionally lead him to buck the party. That led him to one of his biggest headaches outside of Bridgegate: his appearance with Mr. Obama to tour damage from Superstorm Sandy just days before the 2012 election. Many Republicans chafed at the ample praise Christie heaped on the president for his aggressive response to the storm, and some went so far as to blame him for nominee Mitt Romney's loss.

But his passion could also be a huge boon in the kind of one-on-one politicking that wins over voters in early states like Iowa and New Hampshire.

"He's very charismatic," Mandel said. "He is a gifted, effective one-on-one connecting with the people that he's talking with, very gifted political figure, and in fact more gifted than almost anyone I've ever seen after Bill Clinton."

Plus, she said, he truly seems to enjoy the art of campaigning. One of Christie's records as governor is the well over 100 town hall meetings he has held to talk to constituents.

Stylistically, Christie has convinced at least some donors that he is best person to back in 2016. Bobbie Kilberg, a longtime Republican fundraiser from Virginia, recently settled on Christie as the candidate to whom she would lend her time and energy if he decides to run.

"We think that Chris will make an exceptional president and that he has the strength to forcefully take it to the Democrats in the general election, which will be necessary to win back the presidency," Kilberg told CBS News, speaking for herself and her husband.

Securing Kilberg's backing was a victory, but there are a lot more donors Christie will still need to convince. He is expected to draw from a similar pool of money as Bush, should he run, although he does benefit from Romney's decision to bow out of 2016.

Then there is the lasting implication of the bridge scandal. Christie's poll numbers tumbled from a 60-to-70- percent favorable range in 2013 to a 40-to-50-percent range after the scandal in the Rutgers-Eagleton Poll. He seems to have recovered, in light of the lack any damning evidence against him, but the incident remains a potential time bomb if the investigations turn up any new evidence.

Christie, in typical fashion, is confident about the scandal's effect -- or lack thereof -- on his political future.

"I'm not the first chief executive who had someone on their staff do something they didn't know something about but they disapproved of and later had to fire them. I don't think that that hurt anybody's career and it's not going to hurt mine," he said last May, predicting it would be a "footnote."