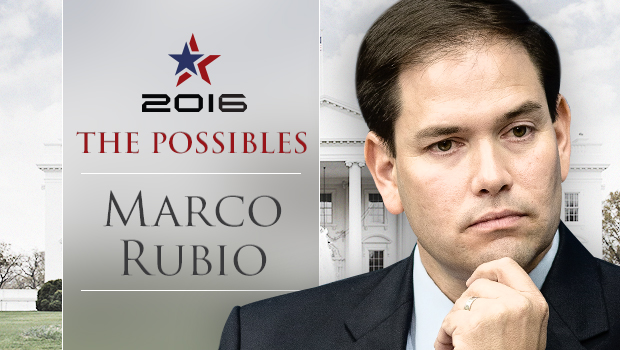 Sen. Marco Rubio, R-Florida, knows what sets him apart from most Republicans.

As a first-generation Cuban-American, Rubio is familiar with the American immigrant experience. At 43 years old, he's young enough to recognize an Internet meme. And, he argues, he's more focused on the structural problems that have led to economic inequality in the U.S.

Fostering upward mobility is largely the focus of his new book, "American Dreams: Restoring Economic Opportunity for Everyone," and it could be the basis for a presidential campaign. Rubio said he'll jump in the 2016 race if no one else in the Republican field puts forward an economic agenda like his -- even if that means running against his one-time mentor, former Florida Gov. Jeb Bush.

"If I run for president it won't be against anyone, it will be because I believe I have an agenda that no one else is offering on our side of the aisle," Rubio said Monday on CBS This Morning.

What he's known for

While he's been working on beefing up his policy credentials, it was Rubio's unique identity and political acumen that first generated buzz.

As a young, conservative Latino with the political chops to win in Florida -- the nation's largest swing state -- Rubio has been a star in the GOP since winning his Senate seat in 2010. He ran an insurgent campaign against Republican-turned-independent Gov. Charlie Crist and twice defeated the governor handily to claim the Senate seat.

While he won his first Senate race with tea party support, he quickly made friends with the Republican establishment and made headlines in 2013 by supporting the Senate's comprehensive immigration reform package. Time magazine that year hailed Rubio as the "Republican savior."

At the very least, Rubio could help salvage the GOP's reputation with Latino voters. He won his 2010 race with 55 percent of the Hispanic vote in Florida, only to watch his party lose Latino support in the subsequent years with talk of electric border fences and "self-deportation."

Rubio's youth also remains a clear asset -- one that presents an easy contrast with Hillary Clinton (67 years old) and Jeb Bush (61). As early as page 8 in his new book, Rubio charges that Clinton is wedded to policies "of the past."

"It's not a matter of age, it's a matter of the age of your ideas," Rubio said to CBS News correspondent Nancy Cordes.

While the United States was prosperous during Bill Clinton's presidency, "the 1990s are over," Rubio said. "We're in the 21st Century. The notion you're going to take ideas that worked in the 20th Century and translate them to the 21st Century and they're going to solve our modern-day problems is just not true... The longer we keep insisting on it, the more people are going to be left behind."

Attributes like ethnicity and age can give candidates an "entry point" into the election, GOP pollster David Winston told CBS News, but it will take more substance to mount a successful campaign. Rubio is taking the right approach by focusing on economic policy issues, Winston said. Winston's post-midterm research showed that voters gave the GOP no clear mandate, other than to bring some good ideas to the table.

"If there's one mandate for Republicans, it's the expectation of effective governing," he said. "That means you have a vision of the direction the country should be going and how to get there."

As for whether Rubio has the right set of ideas, "the Republican electorate will decide that," Winston said.

Economic policy: In his book, Rubio lays out some of the economic proposals he's recently proposed, such as a "Student Investment Plan" to make college more affordable. The plan would let investors help pay for a student's tuition in return for a percentage of his or her income upon graduation.

He also promotes his plan to replace the Earned Income Tax Credit with a low-income wage subsidy he calls a "federal wage enhancement."

The senator also reiterates his support for a plan to add a "premium support" element to Medicare, which would give seniors the choice of getting a voucher for private insurance rather than government health coverage.

Foreign Policy: Rubio has set himself apart as one of the most hawkish potential 2016 candidates, standing in particular contrast to libertarian Sen. Rand Paul, R-Kentucky.

Unlike Paul, Rubio maintains that opening up economic relations with Cuba will do nothing to ease the political repression there.

"My belief is that the Cuban government will pocket all of these changes... but it has already made very clear there will be no political change," he said on CBS This Morning. "There is no contemporary example of how a tyranny resistant to change is forced to change because of economic opening."

Meanwhile, in September, Rubio suggested that other Republicans are following his lead when it comes to stepping up the fight against ISIS. He also last year criticized the Obama administration for not doing enough to deter Russia from interfering in Ukraine.

Immigration: While Rubio supported the failed 2013 comprehensive Senate bill, Rubio told the Associated Press last week that he now supports a piece-by-piece approach to the issue.

"I ran for office to identify problems and try to solve them," he said. "Now, we tried to solve them last year through a comprehensive bill. And it's clear that that approach won't work."

Same-sex marriage: After Florida's ban on same-sex marriage ended earlier this month, Rubio restated his belief that "the institution of marriage is defined as the union of one man and one woman."

However, he added to CNN, "I understand that voters in some states have changed that, and I respect it," he said. "And, you know, we have a court system that's beginning to weigh in -- and whatever the law is, we're going to abide by it and respect it."

Marijuana use: When states last year began experimenting with marijuana legalization, Rubio said he opposed legalization. However, he refused to comment on his own experience with the drug.

Why some Republicans may think twice about Rubio

Rubio's proven to be a charismatic conservative, and he has support from both establishment Republicans and the tea party-aligned wing of the party. Still, he may not have enough support to make it all the way to the nomination.

"Is he conservative enough to contest with [Ted] Cruz, [Rick] Santorum and whoever for the tea party types? Probably not," Florida-based GOP consultant John Stipanovich told CBS News. "Is he establishment enough to post up against Jeb [Bush] or [Chris] Christie? Probably not."

Stipanovich has strong ties to Bush, and while he's not working with the former governor currently, Stipanovich noted he's "not without bias" on the subject. He pointed out that many GOP operatives in Florida and across the country have, like him, "worked for, served with, supported, have hoped for one Bush or another for what -- 40 years?"

The fact that Jeb Bush has shown strong interest in running for president could make it more difficult for Rubio to tap into Florida's base of major GOP supporters and donors.

"I can't speak to Iowa or New Hampshire," Stipanovich said, but "if you want to run for something for Florida in the Republican Party, you don't want to run against Bush."

Bush's supporters are already aiming to raise $100 million for the former governor in the next three months, and Rubio has acknowledged that Bush should be able to pull it off.

Still, he told CBS This Morning that this fundraising goal isn't influencing his own decision.

"If I decide the best place to serve America at this time in my life is as president of the United States, I'll run for president, and I'm confident we can put together a campaign that makes us competitive and allows us to win," he said.