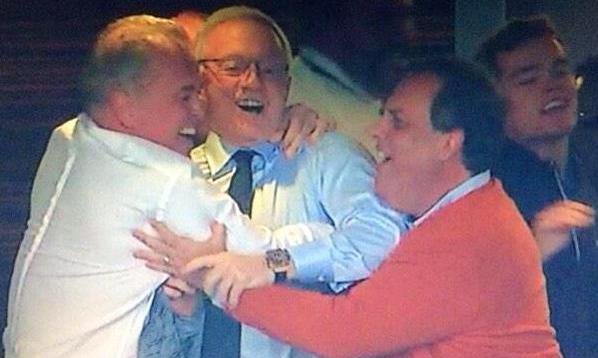 He may be the governor of New Jersey, but when it comes to football, Chris Christie's allegiances lie farther west.

His die-hard Dallas fan status is well known but still attracts attention from time to time. And on Sunday, he got plenty of attention for his excited embrace of Cowboys' owner Jerry Jones after Dallas beat Detroit, 24-20, in the NFL playoffs. Christie was sporting his trademark orange sweater, which has been his attire of choice for five Cowboys victories in a row - prompting "some people in my universe" to label it a good luck charm, he said.

"It was pandemonium in there...It's difficult to describe the level of intensity in the Jones box during these games" Christie said of the win on WFAN's "Boomer & Carton" show Monday morning."

On the radio show he also defended his love for the Cowboys, which has drawn scorn from some as a politically-motivated move or inferiority complex.

"When the Cowboys are losing the last game of the year the last three seasons, not to make the playoffs, there's nobody getting on social media giving me a hard time about being a Cowboys fan," he said. "So we all know what this is about and that's fine, it's great, but believe me: I would take all the abuse that I'm taking from some of these folks in return for Cowboys playoffs wins."

Asked whether he would carry Texas as a presidential candidate, Christie said, "Let's just say this Boomer: I think our chances have improved."

The governor was also asked to weigh in on the deaths of two New York City police officers, which has sparked tensions between the city's mayor, Bill de Blasio, and the city's police force. Some officers turned their backs on de Blasio at both funerals at a show of disrespect for the mayor, whose statements union leaders have said contributed to an environment that allowed the killings by supporting protests following the deaths of Eric Garner on Staten Island and Michael Brown in Ferguson, Missouri.

"I think the rhetoric has been way overheated in a number of different areas, and the fact is, we need to be more thoughtful about this than reactive and that's what I've tried to do with my own comments about it," he said.

"I absolutely believe that you need to have respect for the office that people hold; that's part of keeping our civil society together. But you can also understand it's a very emotional reaction for folks who believe that they weren't served correctly, so this is a very, very tough one and one that I think in the end, cooler heads have to prevail on both sides."