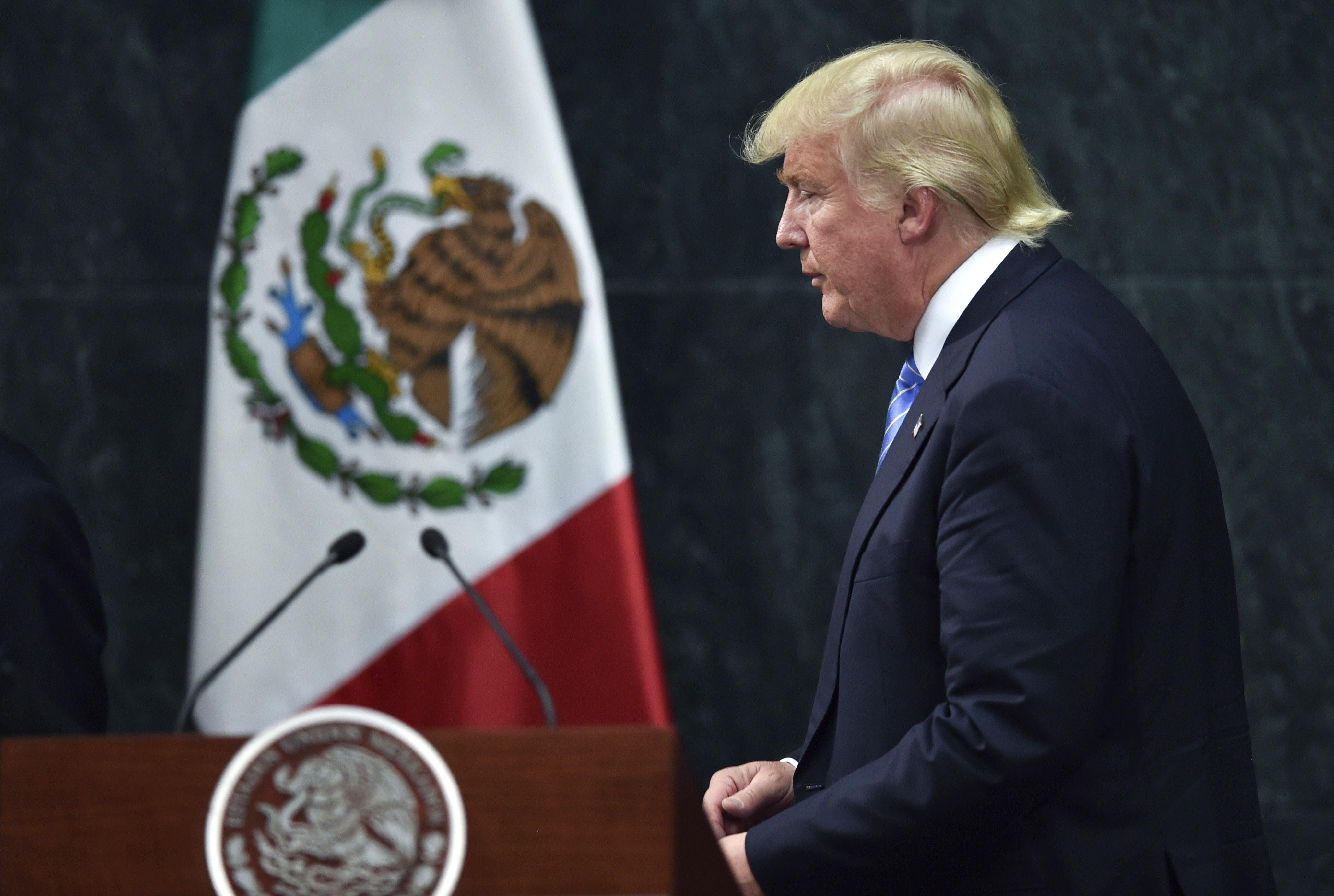 With everything from Brexit to the Iran nuclear deal to Russian hackers in the headlines this fall, foreign policy is playing a major role in the 2016 presidential campaign.

And America’s relationship with the rest of the world plays a big part in Republican nominee Donald Trump’s overall platform: his now-famous slogan, “Make America Great Again,” is a reference to his view that the United States no longer holds the esteem and power in the world that it once did.

Trump has pitched an “America First” foreign policy, a phrase that was first used to discourage U.S. involvement in World War II.

“Americanism, not globalism, will be our credo,” he said during his acceptance speech at the Republican convention this summer. “As long as we are led by politicians who will not put America first, then we can be assured that other nations will not treat America with respect. This will all change in 2017.”

Here are some key components of Trump’s stated views on foreign policy:

Build a wall along the U.S.-Mexico border

This is one of Trump’s first and most recognizable foreign policy goals: to build a wall along the U.S.-Mexico border, which he says Mexico will pay for.

Trump traveled to Mexico to meet with Mexican President Enrique Pena Nieto in late August; the pair spoke of a productive and informative meeting, but got into an international dust-up over whether and how they discussed the border wall. Trump said during a joint press conference that he and Pena Nieto discussed the wall, but did not discuss “payment of the wall.” Pena Nieto later said that he told Trump quite clearly that Mexico would not be paying.

Be willing to work with Russia

During NBC’s Commander-in-Chief forum in September, Trump said he would have a “very, very good relationship” with Putin; he went on to praise Putin for his “strong control” over his country, adding: “in terms of leadership, he’s getting an ‘A.’”

This warmth toward Putin is nothing new: in December 2015, Trump told a rally in Iowa that the fact Putin said nice things about him was “a good thing.” “I mean you look, we’re all tough guys, but wouldn’t it be nice if Russia and us could knock out an enemy together?” he asked.

Make changes to the United States’ involvement in NATO

The Republican nominee has said the U.S. should reevaluate its participation in the North Atlantic Treaty Organization (NATO), the major strategic and military alliance. NATO, Trump said at a town hall in March, is “costing us too much money.” “We’re taking care of, as an example, the Ukraine. I mean, the countries over there don’t seem to be so interested,” he said. “We’re the ones taking the brunt of it. So I think we have to reconsider -- keep NATO, but maybe we have to pay a lot less toward the NATO itself.”

Trump also suggested in a New York Times interview in July that he might not immediately defend other NATO countries if they were attacked and could set conditions for U.S. military aid, a move that would go against existing international agreements and even the suggestion of which angered Republicans and diplomats alike.

However, Trump appears to have changed course more recently. In an address on foreign policy, in August, Trump said the U.S. would “work closely with NATO” to defeat ISIS. “I had previously said that NATO was obsolete because it failed to deal adequately with terrorism; since my comments, they have changed their policy and now have a new division focused on terror threats.”

On the campaign trail, Trump has frequently railed against multinational trade agreements like the North American Free Trade Agreement (NAFTA) or the Trans-Pacific Partnership (TPP), saying those trade deals are responsible for sending U.S. jobs overseas.

“I am going to turn our bad trade agreements into great ones,” he said during his convention speech in July. “America has lost nearly-one third of its manufacturing jobs since 1997, following the enactment of disastrous trade deals supported by Bill and Hillary Clinton.”

One of the areas in which Trump has been most critical of his Democratic opponent, Hillary Clinton, is over support for military intervention in Iraq. Clinton voted to authorize the Iraq War in the Senate, a move she has since repeatedly said was a mistake.

Trump frequently tells crowds and interviewers that he was against the Iraq War “from the beginning,” a statement which has not held up under scrutiny. He told Esquire magazine in 2004 that he “would never have handled it that way,” but that wast after the war had started in 2003.

Still, in a suggestion that would be a major reversal of U.S. policy, Trump argued in September that the U.S. should “take the oil” out of Iraq. He has not elaborated on that idea since then, however.