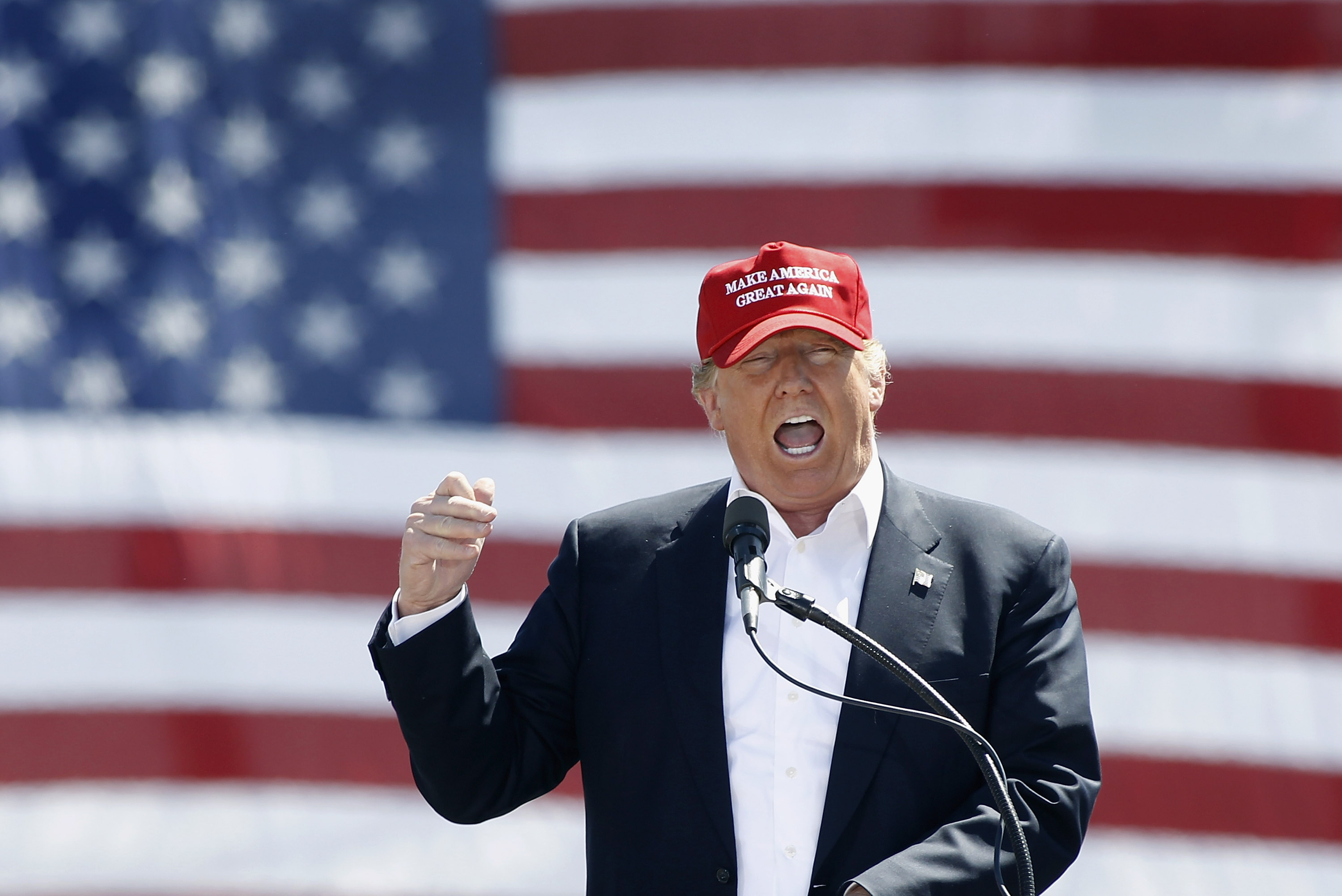 After months of wading into presidential waters with shallow foreign policy proposals -- including bombing "the s*** out of" terror groups and inking a "totally renegotiated" nuclear deal with Iran -- Donald Trump is finally jumping into the deep end.

During an interview with the New York Times that spanned two phone calls and clocked in at 100 minutes, Trump, answering a bevy of foreign policy questions with his trademark bravado, outlined an "America First" vision for the world that would come to fruition with business deals and tough negotiations.

"I'm not isolationist, but I am 'America First.' So I like the expression. I'm 'America First,'" Trump said, according to the Times' transcript, which was published Saturday. Trump glommed on to the term, once used as the name for an isolationist political party in the U.S. in the 1940s, after the Times' David Sanger suggested it. "We have been disrespected, mocked and ripped off for many, many years by people that were smarter, shrewder, tougher. We were the big bully, but we were not smartly led."

Trump added: "We're going to be friendly with everybody, but we're not going to be taken advantage of by anybody."

Specifically, Trump doesn't want to be cheated by Middle East allies like Saudi Arabia, who he said needed to step up their efforts in the fight against terror.

"We are not being reimbursed for our protection of many of the countries that you'll be talking about, that, including Saudi Arabia," Trump said. "I would say at a minimum, we have to be reimbursed, substantially reimbursed...I think if Saudi Arabia was without the cloak of American protection of our country's, of U.S. protection, think of Saudi Arabia. I don't think it would be around."

When asked specifically if he would be willing to tell nations like Saudi Arabia that the U.S. would no longer purchase oil until they sent ground troops to fight against the Islamic State of Iraq and Syia (ISIS), Trump responded: "The answer is, probably yes."

In the wide-ranging Times interview, Trump also touched on the Iran nuclear deal, which he has previously said he would want to renegotiate.

"Certainly the deal is not long enough. Because at the end of the deal they're going to have great nuclear capability," he said. "I would never have given them back the $150 billion under any circumstances. I would've never allowed that to happen."

The GOP front-runner asserted that the U.S. also "cannot be the policeman of the world" when it comes to allies in the Asia Pacific region, suggesting he would like to see Japan and South Korea develop nuclear weaponry in order to combat North Korea.

"Unfortunately, we have a nuclear world now," Trump said. "Would I rather have North Korea have [nuclear weapons] with Japan sitting there having them also? You may very well be better off if that's the case. In other words, where Japan is defending itself against North Korea, which is a real problem."

He called the current U.S. relationship with Japan "a pretty one-sided agreement" because "if we're attacked, they do not have to come to our defense."

But "if they're attacked," he said, "we have to come totally to their defense. And that is a -- that's a real problem."

Trump would be open to withdrawing U.S. forces from Japan and South Korea if the two nations did not give more to the costs of keeping those troops in the area.

To combat Chinese aggression in the South China Sea, the businessman again said he would use a more corporate, and less diplomatic, strategy.

"I would use trade to negotiate," Trump said. "Would I go to war? Look, let me just tell you. There's a question I wouldn't want to answer. Because I don't want to say I won't or I will."

"I will tell you this," he continued. "This is the one aspect I can tell you. I would use trade, absolutely, as a bargaining chip."

Trump, who recently came under fire for proposing the U.S. back out of the NATO alliance, asserted that experts have started to come around to his way of thinking.

"I said something a few days ago and I was vastly criticized," Trump said. "I notice now this morning, people are saying Donald Trump is a genius."

"Number one: We pay far too much," he said. "We are spending -- you know, in fact, they're even making it so the percentages are greater. NATO is unfair, economically, to us, to the United States. Because it really helps them more so than the United States, and we pay a disproportionate share."

When asked how he came to settle on these experts, Trump said they were "recommended by people."

"These are people recommended - people that I respect recommended them," he said. "I've heard very good things about them. In addition, we're going to be adding some additional names that I've liked over the years."

Some of those names, however, weren't available to work with the presidential campaign, which Trump lamented as the fault of television networks like CNN and Fox News.

Trump did not answer when asked whether he had already met with his foreign policy team.