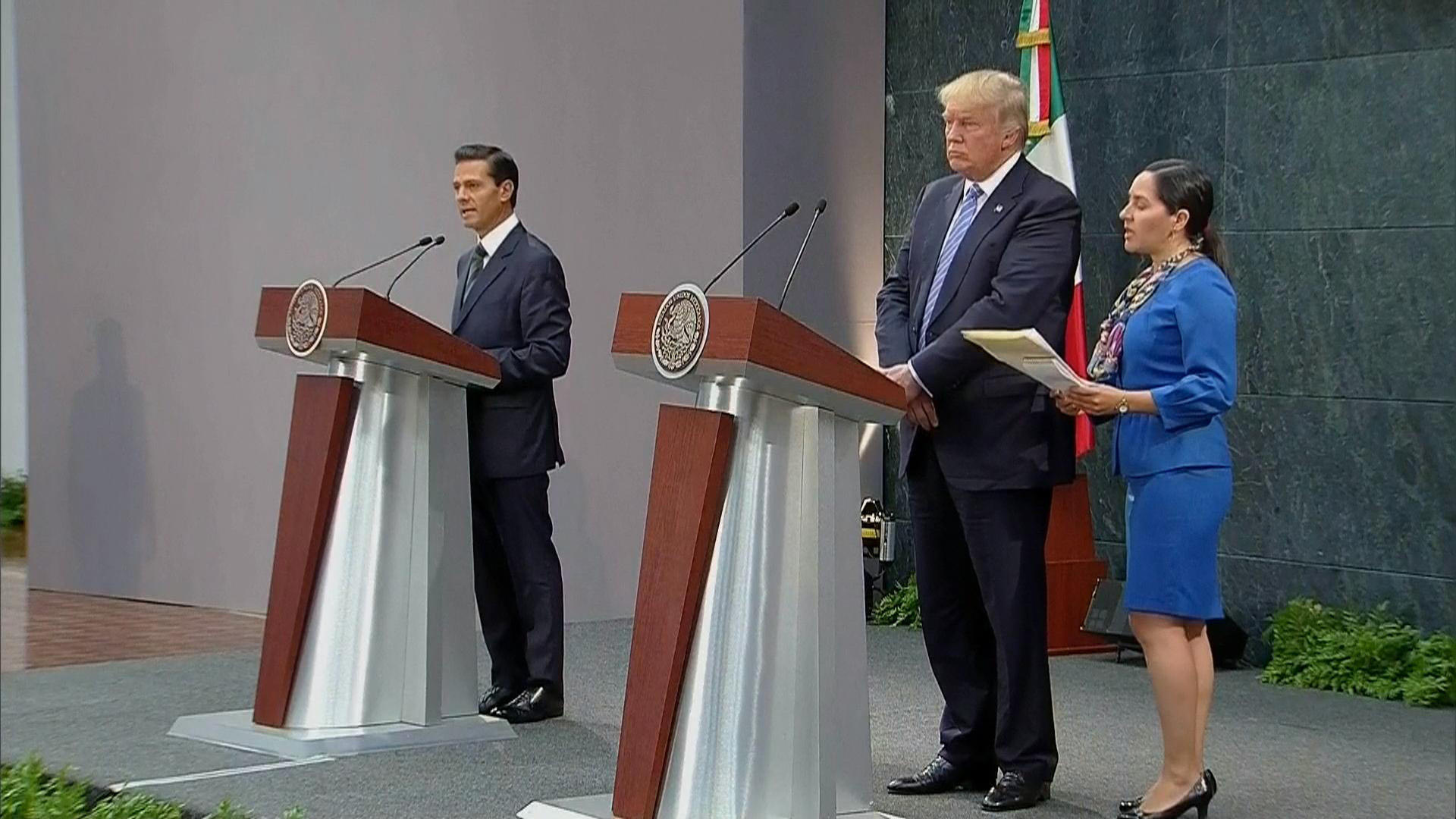 In a joint appearance with Mexican President Enrique Peña Nieto Wednesday afternoon during his surprise trip to Mexico City, Donald Trump said the pair's discussion was "substantive, direct and constructive" and that they discussed Trump's signature proposal of a wall along the U.S.-Mexico border—but did not discuss who would pay for the wall.

"We discussed the wall," Trump told reporters after meeting privately with Peña Nieto. "We didn't discuss payment of the wall."

Trump, the Republican nominee, has made illegal immigration a centerpiece of his presidential campaign, frequently invoking his claim that Mexico will pay for a wall along the border between the two countries.

In a tweet following the event, Peña Nieto said in Spanish that he made it clear to Trump that Mexico will not pay for the wall -- and that the two went on to other topics afterward.

Still, Trump's tone in the appearance was far more muted than his campaign-trail persona: the candidate delivered a relatively short statement, stressing the importance of collaboration with Mexico on key issues like immigration and trade.

"The United States and Mexico share a 2000-mile border, half a trillion dollars in annual trade and 1 million legal border crossings each and every day," Trump said. "We are united by our support for democracy, a great love for our people and the contributions of millions of Mexican-Americans to the United States."

He added that there are five things on which he and Peña Nieto can agree are joint priorities: ending illegal immigration in the region, establishing a secure border, dismantling drug cartels, improving the North American Free Trade Agreement (NAFTA), and keeping manufacturing wealth "in our hemisphere."

"We recognize and respect the right of either country to build a physical barrier or wall," he said.

Trump concluded by calling it a "tremendous honor" to meet with Peña Nieto, adding: "I call you a friend."

Peña Nieto, for his part, characterized his discussion with Trump was "open and constructive," noting the long history of cooperation between the U.S. and Mexico. He said every strong relationship must be revisited frequently, and that he looks forward to working with U.S. leaders going forward.

"We must always be open to talk about what has worked and what hasn't," Peña Nieto said in Spanish, stressing the need for "mutual respect."

The Mexican leader also noted that he and Trump discussed the effects of NAFTA on both countries' citizens, acknowledging that it could be "improved" to benefit both countries. Trade, and his opposition to existing and proposed international trade agreements, has been another top topic for Trump on the campaign trail.

Peña Nieto had invited both Trump and Democratic nominee Hillary Clinton to meet with him in Mexico City; Trump's campaign announced Tuesday night that he would be taking Peña Nieto up on his offer the same day he is set to deliver a major speech on immigration in Phoenix.

Hillary Clinton's account tweeted in Spanish and English shortly after the event concluded, saying Trump's "plan on immigration is clear," quoting Trump declaring in a speech in June, "We are building a wall. He's a Mexican!"