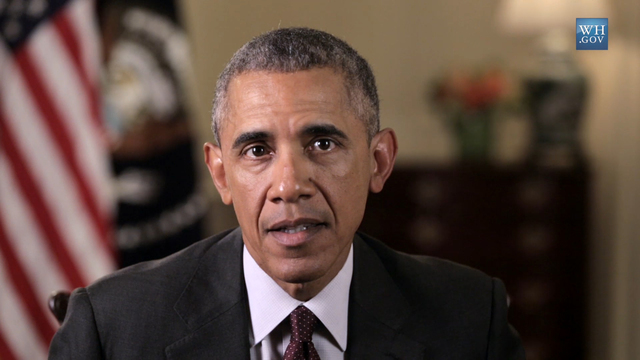 President Obama jumped on the year-in-review bandwagon with a video, released Saturday, that lists his administration's top accomplishments of 2015.

International agreements like the Trans-Pacific Partnership and the Iran nuclear deal feature prominently on the list. But some domestic issues, particularly those that faced Supreme Court challenges, also make it on the board.

Take a look at what the president believes "should make every American optimistic about 2016":

Businesses, according to the president, have "added 13.7 million new jobs over a 69-month streak of job growth." Mr. Obama also cited the latest unemployment rate figures -- in October, it fell to 5 percent and has remained at that level since -- as proof of a strong economy.

Despite numerous Republican threats and challenges to the Affordable Care Act (ACA), the president's landmark health bill survived 2015. In June, the Supreme Court even upheld a major part of the Obamacare legislation, ruling in a 6-3 decision that the federal government can give out subsidies to its consumers in all states, no matter whether they signed up through the federal or state-based exchange.

"The rate of the uninsured in America dropped below 10 percent for the first time ever," Mr. Obama said in his video. "In all, 17.6 million people and climbing have gained coverage as the Affordable Care Act has taken effect."

Just this month, the White House extended the deadline to sign up for health insurance under the ACA by two days because of "unprecedented demand."

For the past year, the president has heavily championed a climate change agenda. And just last week, the world came together at the Paris COP21 climate talks to reach a historic deal with ambitious goals to reduce greenhouse gas emissions.

Of the Paris accord, the president said, "it was only possible because America led with clean energy here at home and strong diplomacy around the world."

In August, the U.S. reopened its embassy in Cuba, the first symbolic step to normalizing relations between the two countries and the first time the American flag has flown in Havana in 54 years.

Since the momentous occasion, the administration has taken further steps to make it easier to travel to and do business in Cuba.

"We turned the page on an outdated, half-century-old policy by re-establishing diplomatic relations with Cuba and reopening embassies in both our countries, allowing us to build greater ties between Americans and Cubans," Mr. Obama said.

In July, six world powers, including the United States, struck a landmark nuclear deal with Iran. And in the months after, despite staunch Republican objection, the deal survived a vote in Congress.

The president touted the accord in his Saturday video, saying "We succeeded in forging a strong deal to stop Iran from obtaining a nuclear weapon."

"In fact," he added, "Iran has already dismantled thousands of centrifuges that enrich uranium."

Over the past week, the president has urged Americans to stay united in the face of terror threats, after the recent shooting in San Bernardino left the nation wary of future strikes.

"Even as we continue to grieve over the attack in San Bernardino, we're leading a global coalition and hitting ISIL harder than ever," Mr. Obama said, using a different acronym for the Islamic State of Iraq and Syria, or ISIS. "In Syria and Iraq, ISIL is losing territory, and we're not going to stop until we destroy this terrorist organization."

In an era where partisan bickering in Washington has reached a fever pitch, the president chose to highlight two bipartisan legislative achievements. He pointed to a sweeping education overhaul of No Child Left Behind and a budget deal that avoided the threat of a government shutdown, calling them "a pair of Christmas miracles in Washington."

2. The legalization of same-sex marriage

"Love won," the president said, referring to the Supreme Court's landmark 5-4 decision that same-sex couples have a constitutional right to marry. "No matter who you are, here in America, you're free to marry the person you love because the freedom to marry is now the law in all 50 states."

"All of this progress is because of you -- because of workers rolling up their sleeves and getting the job done and entrepreneurs starting new businesses," Mr. Obama said Saturday. "Because of teachers and health workers and parents -- all of us taking care of each other. Because of our incredible men and women in uniform, serving to protect us all. Because, when we're united as Americans, there's nothing that we cannot do."

Senate Majority Leader Mitch McConnell also celebrated the end of the year with his own year-end list, proclaiming that the Senate has been restored to "high purpose."

"I'm proud of what the new Republican majority has accomplished," the Kentucky senator said in a video Saturday, slamming the previous Senate as "a mess."

McConnell listed what he saw as legislative wins for Republicans, including the approval of a federal highway bill, a veterans health care measure and the passage of anti-human trafficking legislation.

"Many issues languished in the old Senate for years," he said. "Some were assumed to be too difficult for any Senate majority to address. But the Republican Senate ... tackled each of them."

"And the president signed most into law," McConnell added.