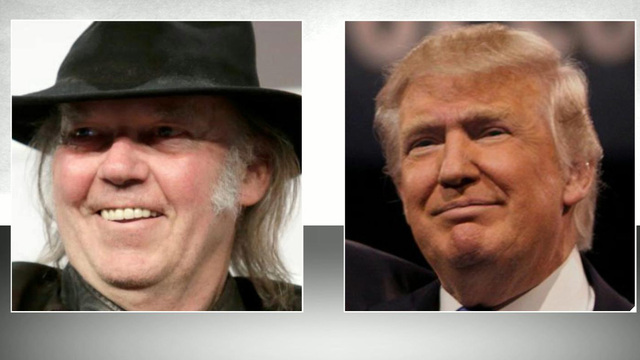 When the billionaire businessman and reality TV star launched his bid last week with a rally at Trump Tower in Manhattan, he strode onstage to the tune of Young's "Rockin' in the Free World." Here's a Vine of his grand entrance:

The aging rocker quickly objected. His manager said Trump "wasn't authorized" to use the song and added that Young, a Canadian citizen, supports Vermont Sen. Bernie Sanders, a self-described "independent socialist" running as a Democrat.

Trump's campaign said they paid for the right to use the song, but they will respect Young's request not to use it in the future. Young, for his part, has given Sanders the right to use his song.

Trump told a Republican gathering in Maryland on Tuesday about how he reacted when he learned of Young's objection.

"All of a sudden I get this like, thing, Neil Young protests Trump...Of course, in all fairness, he's super liberal; I'm the exact opposite," Trump said. "His manager said, 'Oh how terrible it is for Donald Trump, the music.' And I'm saying to myself, 'How can this be possible?' The guy's calling me all the time, he loves me. And then all of a sudden this happens. Like, it's amazing. Tough business."

Many political observers have dismissed Trump's 2016 bid as a publicity stunt, pointing to his political flirtations in previous cycles and his unorthodox 2016 kickoff rally. But Trump appears to be moving forward with the business of building a credible campaign, hiring staffers and filing the requisite paperwork with the Federal Election Commission.

And according to at least one poll, he's gaining some traction. A Suffolk University survey released Wednesday shows Trump in second place in New Hampshire, site of the first presidential primary and a critically important state in the nominating process. Former Florida Gov. Jeb Bush took the top spot in that poll, nabbing 14 percent of GOP respondents. But Trump was close behind at 11 percent. Wisconsin Gov. Scott Walker was third, with eight percent.

The poll also found Trump with the worst favorability ratings in the field. Thirty-seven percent of respondents said they view Trump favorably, while 49 percent had an unfavorable view. The results were based on a survey of 500 New Hampshire Republicans conducted June 18-22. The poll's margin of error was plus or minus 4.4 percent.

Trump said Tuesday he was gratified by the poll results. ("That's a great poll by the way, we say that's the best of all the New Hampshire polls.") But he expressed surprise about the man who bested him.

"How could Bush be in first place?" he asked. "This guy can't negotiate out of a paper bag."

"The last thing we need is another Bush, number one," he continued. "Number two he's very much in favor of common core, which is essentially saying he wants people to be educated, kids educated directly by the bureaucrats of Washington. No good. And he's very weak on immigration, so I have a lot of differences with Governor Bush."