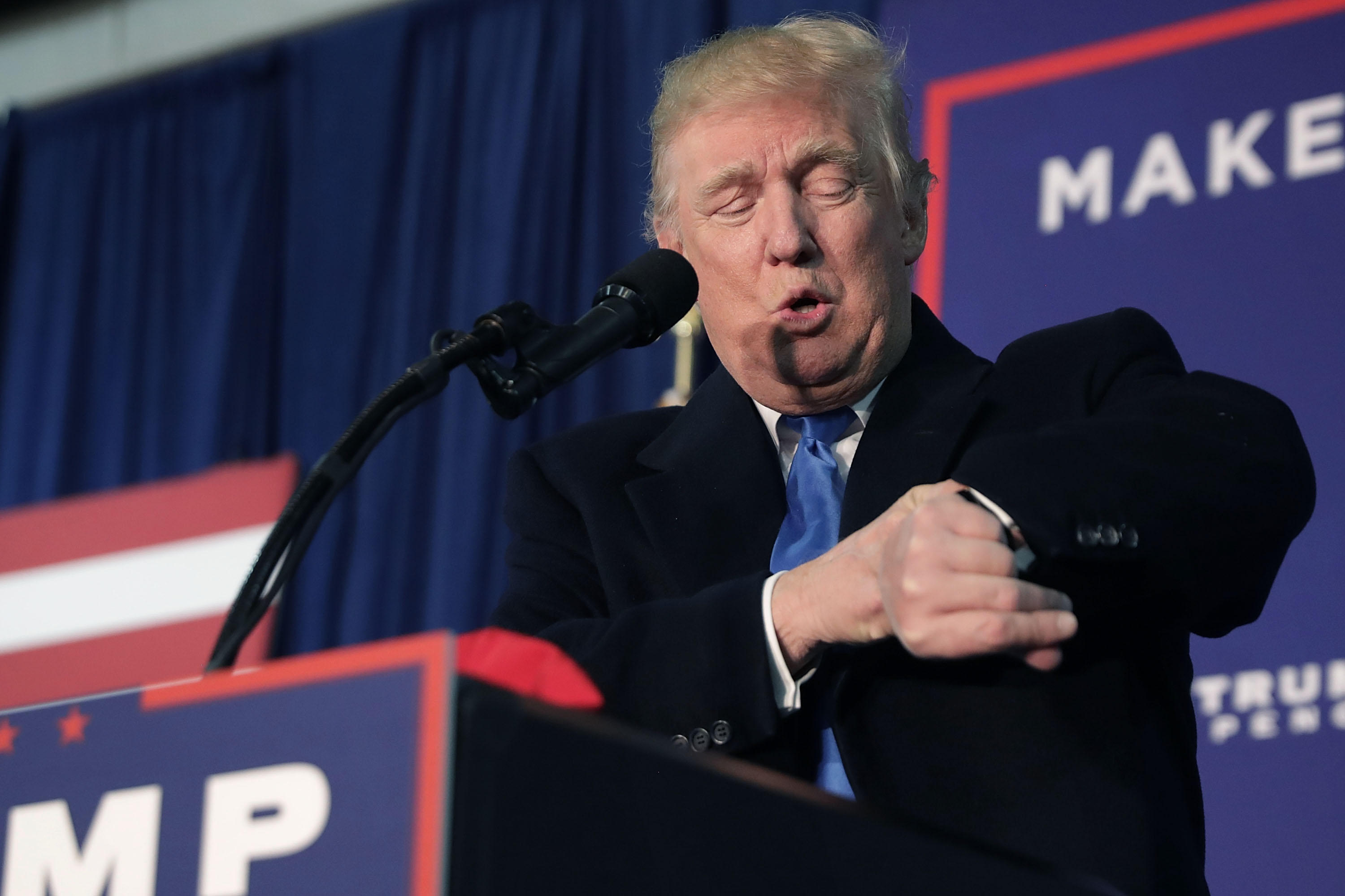 LEESBURG, V.A. -- A hoarse Donald Trump took the stage after midnight -- almost three hours late -- at a fairground here in Leesburg, Virginia. It was his fifth event Sunday.

Thousands of supporters packed the barn and it didn’t seem like anyone was frustrated by Trump’s tardiness, or as he called it, “a midnight special.”

It was the busiest day in Trump’s quixotic year and a half run for the presidency, two days before Election Day. Trump started his run on June 16, 2015.

“Famous day, right?” Trump said at his first rally of the day in Sioux City, Iowa.

The stops Trump made; Sioux City, Iowa, an airport hangar in Minneapolis, Minnesota, an amphitheater in suburban Detroit, another airport hangar outside Pittsburgh, and the barn in Northern Virginia, indicated a candidate desperately trying to cobble together a narrow path to 270 electoral votes, as early voting shows other paths out of reach.

“I’ll tell you one thing,” Trump said in Minneapolis. “If I don’t win Minnesota, I’m gonna look real bad to those pundits that I do not respect very much.”

The last time Minnesota’s electoral votes went to a Republican presidential candidate was Richard Nixon in 1972. Recent polling shows Hillary Clinton with a comfortable lead in the state. However,  Trump needs an upset from a traditionally Democratic states to have any hope of winning the White House -- especially as early voting in battleground states such as Nevada show a significant increase in Hispanic turnout, a demographic which has long viewed Trump unfavorably.

Trump is the underdog in most of the other states he campaigned in on Sunday. Polls in Michigan, Pennsylvania and Virginia have also given Clinton a comfortable lead, although Democrats have shown enough concern that Trump is closing the gap to send a bevy of surrogates there, including sending the former Secretary of State herself to speak in Detroit on Friday.

The Republican nominee’s messaging was knocked off kilter on Sunday when news of FBI director James Comey’s letter to Congress broke, stating that new emails discovered on disgraced former Congressman Anthony Weiner’s laptop, related to Clinton’s private email server from her time as Secretary of State, did not contain anything that would change the FBI’s conclusion from the summer -- that this did not rise to the level of criminal prosecution.

After days of praising Comey and the FBI for re-opening the investigation into Clinton, Trump tweaked his message to subtly criticize Comey, saying, “The investigations into her crimes will go on for a long, long time.  The rank and file special agents at the FBI won’t let her get away with her terrible crimes.”

Trump’s ability to stay on message was sorely tested, as he frequently deviated off his prepared remarks, extending his speeches and dragging his schedule later and later into in the night. In particular, Trump seemed fixated on Beyonce and Jay-Z, who recently performed on behalf of Clinton at a campaign event in Cleveland, Ohio.

“Jay-Z and Beyonce used the most filthy language you’ve ever heard,” Trump said in Minneapolis, referring to their performances on behalf of Clinton. “Many of the audience left during the audience because it was disgusting, the words, right? They left.”

Ironically, Trump’s warm up at his next event in the Detroit suburb of Sterling Heights was musician Ted Nugent,  who has long faced criticism for racist and anti-Semitic comments.

Nugent, whose hits include “Cat Scratch Fever,” lived up to his raunchy reputation on Sunday. During his remarks, Nugent grabbed his private parts and said, “I’ve got your blue state right here, baby!”

Trump came on stage after and said, “By the way, my language is much, much cleaner as you know than Jay-Z and Beyonce, boy.”

Trump circled back again to discussing his ambitions to engage in a fist fight with Vice President Joe Biden, a subject he has kept circling back to for weeks.

“Biden, who said, ‘Oh, I’d like to take him behind the gym.’ Me. I dream about that,” Trump said. “And everybody said, ‘Oh, wasn’t that nice? Oh, did you see what he said? Wasn’t that cute? Oh, it was so wonderful what Joe said. What Joe said. Wasn’t that cute?’ Now, if I ever said that I wanna take him behind the gym and you know what. They’d say, “Oh, he’s a bully. He’s a terrible person.’”

His darkest rhetoric of the whirlwind day was aimed at the large Somali community in Minnesota, numbering in the tens of thousands.

“How stupid are they to allow this to happen?” Trump said. ”Here in Minnesota, you’ve seen first-hand the problems caused with faulty refugee vetting, with large numbers of Somali refugees coming into your state without your knowledge, without  your support or approval, and with some of them then joining ISIS and spreading their extremist views all over our country and all over the world.”

“A Trump Administration will not admit any refugees without the support of the local community where they are being placed.”

The crowd at the airport hangar in Minneapolis erupted in cheers.

“It’s the least they can do for you. You’ve suffered enough in Minnesota.”

Trump’s last day of campaigning before Election Day is equally as hectic, with stops in Florida, North Carolina, Pennsylvania, New Hampshire and Michigan on the schedule. Confidence in his ability “to win,” of course, has never been lacking in the businessman.

“We have the biggest crowds and it’s the greatest movement ever in the history of our country, Trump said in Michigan. “We now have to go out and we have to vote.”