Uproar has occurred and allegations are flying accusing FIFA of ignoring concussions sustained by footballers by not providing proper care after a head injury during a match.

There have been numerous injuries throughout the World Cup in Brazil, but a few stand out. With the constant coverage, camera angles, instant replay, and hi-def video - us fans at home get a close-up view of what is actually happening on the pitch.

To many-a-fan's dismay, some players were noticeably 'out of it' and even collapsed after sustaining a head injury during play. While getting injured is something that can happen in any sport, certain protocols need to be followed to ensure player safety.

These three players clearly sustained a head injury and went back in to play almost immediately after stumbling or even falling to the ground.

Here's why FIFA needs to pay more attention to concussions:

Álvaro Pereira took a knee to the head while playing against England. He played on, even after stumbling to the sideline. 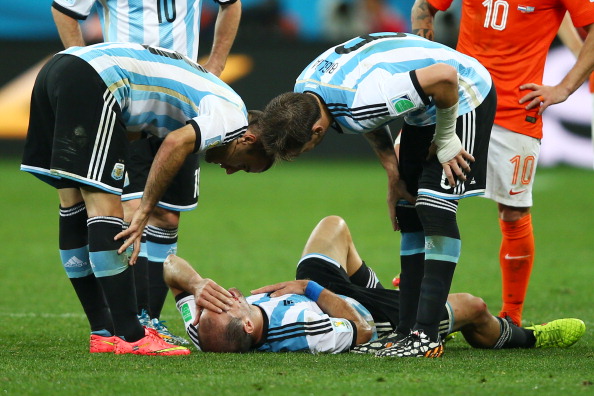 Pablo Zabaleta of Argentina lies on the pitch after a collision as teammates Rodrigo Palacio (L) and Lucas Biglia of Argentina look on during the 2014 FIFA World Cup Brazil Semi Final match between the Netherlands and Argentina (credit: Clive Rose/Getty Images)

Pablo Zabaleta smashed his jaw/face on Netherlands wingback Dirk Kuyt's shoulder. The force was enough to cut his mouth, and after team doctors gave him a look and put tissue in his mouth, Zabaleta went back in to play.

As you can see, Javier Mascherano is clearly disoriented. He went on to finish play in the same match against the Netherlands.

FIFA, let's pay more attention to concussions and our footballers to make sure they're getting the care they need.