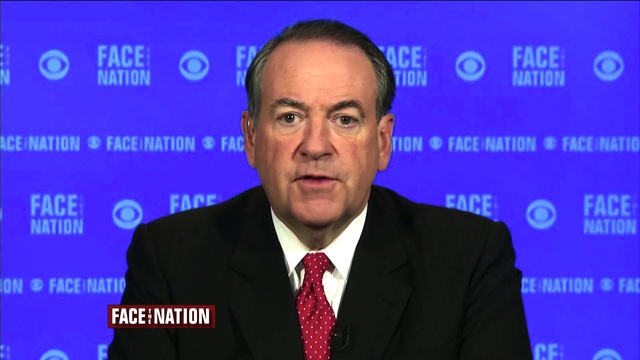 Former Arkansas Gov. Mike Huckabee said Sunday that the 2016 Republican presidential hopefuls are probably hoping they get attacked during the first debate Thursday, if only to get more speaking time on the crowded stage.

"The format only allows for one-minute responses and a 30-second rebuttal if we are attacked by name. So probably a lot of us are sitting there, hoping that we get attacked by name so we get a little more time," Huckabee said in an interview on CBS' "Face the Nation."

To accommodate the 16-person Republican field, Fox News will feature the 10 candidates who are performing the best in five recent national polls during the debate Thursday. The other six candidates will appear in a one-hour forum earlier in the day.

On a more serious note, Huckabee said that he and the many other Republicans competing for the nomination consider the 2016 election "very serious business."

"We don't stand on that stage because we're looking for an opportunity to be on TV. Heck, I had my own television show before I left it to come do this. So this isn't about ego. It's not a vanity project. This is because we think this country is in real big trouble. And I would say I think every other of my Republican colleagues on that stage feels exactly the same way. I'm not going to disparage why they're there," he said.

Huckabee has set himself apart from the field in part by being the sole Republican to court votes the AFL-CIO at a meeting last week. Asked why labor unions should break the mold of supporting Democrats to back him instead, Huckabee said, "I want to be president of all America, not just the part that agrees with me."

"I fight hard for working men and women whether they're in a union or not.," he said. "When we've lost 5 million manufacturing jobs and 60,000 manufacturing plants have closed just since the year 2000, somebody better be attentive to the fact that whether a person is a union member or not, a lot of Americans are working really, really hard these days for a whole lot less money than they made a few years ago."

Huckabee also said that he can get votes from union members who are Republican, which he said is a substantial population.

The former governor also lambasted the nuclear deal with Iran once again and defended his comments last week comparing the agreement to the Holocaust. He said President Obama was marching Israelis "to the door of the oven," a comment that earned a rebuke from the president himself and some of Huckabee's fellow Republicans.

"My comments, while the president may have called them ridiculous, what's ridiculous is that we would ever trust the Iranians who for 36 years have vowed that they will wipe Israel off the face of the map, and have vowed that they will bring to death to America, and chanted it even during the negotiations," Huckabee said. He said that his dozens of visits to Israel over the past 42 years and three separate trips to Auschwitz means he understands "the gravity of the situation."

"When someone is saying they're going to kill an entire group of people, we better take it seriously," Huckabee said.

He also said that American gets "nothing" out of the deal and said that it's actually about ending sanctions and restarting the flow of money to Iran.

"I cannot help but believe that a lot of this is being driven not to secure peace in the Middle East, not to make the world safer, but to make sure that a lot of people with a lot of money get their money back. And that's a tragedy," Huckabee said. "It's a real sad state of affairs when we put money ahead of national security and security for not just the people of Israel but all of the Middle East and all of the world."