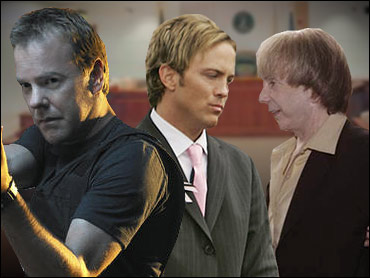 If all the world's a stage, the stage this week was decorated like a courtroom.

That's where many of Hollywood's famous spent some time as they sorted out their divorce and custody issues, defended their misbehaviors and settled their wranglings and disagreements.

And there's more of it in store for record producer Phil Spector since prosecutors have said they will retry him on murder charges after their first attempt ended in a mistrial Tuesday. The jury said it was deadlocked 10-2 in favor of convicting the music producer of killing actress Lana Clarkson more than four years ago. An Oct. 3 hearing is scheduled.

In another high-profile case, Emmy-winning actor Keifer Sutherland, who plays Jack Bauer on the Fox hit "24," was charged with DUI Tuesday. The 40-year-old actor is under a five-year probation for an earlier DUI arrest and could face jail time for violating its terms. A judge will decide Oct. 16.

Britney Spears' legal woes mounted as prosecutors charged her with misdemeanor counts of hit and run, and driving without a valid license after she allegedly smashed her car into another vehicle in August in a Studio City, Calif., parking lot. She is to be arraigned Oct. 10.

Boxer Mike Tyson told a judge Monday that he had cocaine and was impaired when he was stopped for driving erratically in Scottsdale, Ariz., on Dec. 29. Now, it's up to the judge to impose a sentence Nov. 19. He could get more than four years in jail.

Rapper Snoop Dogg also filed a guilty plea this week. He was sentenced on one count of felony possession of a dangerous weapon to 160 hours of community service and three years probation. The charge stems from a September 2006 incident in which a collapsible baton was found in his computer bag at John Wayne Airport in Orange County, Calif.

Actress Vivica A. Fox plans to contest the drunken driving charges filed against her after a March traffic incident. She pleaded not guilty Thursday to misdemeanor counts of driving under the influence and driving with a blood-alcohol level over the legal limit of .08.

The judge has spoken in the case of "Die Hard" director John McTiernan. A federal judge Monday refused to allow him to withdraw his guilty plea to charges of lying to the FBI about his association with disgraced private eye Anthony Pellicano and then sentenced him to four months in prison. He has until January to turn himself in to authorities.

Actor Colin Farrell's personal dresser didn't have to go before a judge to get satisfaction from the "Miami Vice" production company. Joulles Wright, who fractured a jaw on the movie set two years ago, reached a settlement this week with the movie's makers. The terms were not disclosed.

Larry Birkhead, who spent a lot of time in court last year trying to prove he was the biological father of Anna Nicole Smith's infant daughter, may be headed back there. His lawyer in those proceedings is suing him for defamation, fraud and other allegations. Debra Opri is seeking about $200,000 in damages in a suit filed Monday in Los Angeles Superior Court.

Attorneys for Britney Spears and Kevin Federline were back in court Monday in the former couple's ongoing child-custody dispute. Lawyers would only say they were refining "certain areas" of a court order.

In another prolonged battle between ex-spouses, Denise Richards has asked a court to stop allowing ex-husband Charlie Sheen to have overnight stays with their two young daughters. She is also seeking counseling for the two children.

And across the pond, jury selection began Thursday in a British inquest into the death in Paris of Princess Diana and her companion, Dodi Fayed more than a decade ago. The inquest is set to start Oct. 2 and expected to continue for six months. Required by British law, the royal coroner's investigation was delayed all this time until all the French investigations were completed.
By MARY JAYNE McKAY