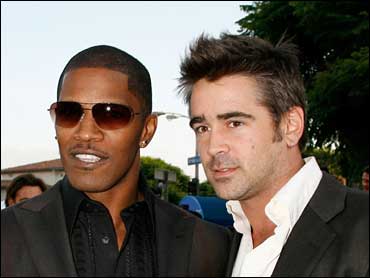 Actor Colin Farrell apparently wasn't the only one partaking in all of the action scenes during the filming of the "Miami Vice."

Farrell's personal dresser on the "Miami Vice" set has settled a lawsuit against the movie's production company two years after she fractured her jaw during filming.

Joulles Wright's attorney, Charles Lipcon, and the defendants' attorney, Bob McIntosh, confirmed Thursday that the lawsuit has been settled, but terms were not disclosed.

Wright, of Atlanta, was riding on a speedboat when an improperly secured bumper broke off and struck her in the face, according to the lawsuit filed in June 2006 in Miami-Dade County.

Wright, who had been hired as Farrell's dresser during the filming of the movie in Miami, allegedly needed surgery and had to have her jaw wired after the August 2005 incident.

The lawsuit claimed the speedboat was unsafe and the defendants did not give Wright adequate medical care, which aggravated her injuries and caused additional pain, mental anguish and lost wages.