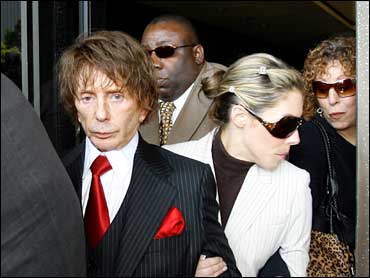 A mistrial was declared in the murder case against Phil Spector when the jury said it was deadlocked 10-2 in favor of convicting the music producer of killing actress Lana Clarkson more than four years ago.

The prosecutor's office announced Wednesday it would seek to retry Spector, and the family of the actress also pledged to press on. A hearing was set for Oct. 3.

"We will not rest until justice is done," said John C. Taylor, a lawyer for the family.

Spector and his wife, Rachelle, left the courthouse shortly after the mistrial Wednesday. The producer's attorneys later met with the jury.

"We thank the people of Los Angeles for keeping an open mind and the jury for their very hard work and their willingness to share their thoughts with us," defense attorney Linda Kenney-Baden said after the meeting.

Jurors had to decide who pulled the trigger of a revolver - leaving no fingerprints - that went off in Clarkson's mouth on Feb. 3, 2003.

The jury foreman told Superior Court Judge Larry Paul Fidler the split was 10-2 after 12 days of deliberations, but did not say which way the panel leaned. A week earlier, the foreman had reported a 7-5 split, and the jurors returned to deliberations with new instructions from the judge.

Some jurors agreed to talk to reporters but did not give their names.

One juror said the holdouts argued over whether Clarkson was suicidal and said the entire jury would have liked to see a psychological profile of the actress. Another juror was troubled by what Spector, who did not call police, did in the 40 minutes between the death and the time police arrived.

"He acted like a guilty man," the juror said.

The foreman noted that the "inability to reach a decision is controversial to most."

"Even on the jury there's deep regret that we were unable to reach a unanimous verdict," he said.

Prosecutors had called women from his past who claimed he threatened them with guns when they tried to leave his presence, and a chauffeur who testified that on the morning of Clarkson's death, Spector came out of his home with a gun in hand and said, "I think I killed somebody."

The defense offered forensic evidence that Clarkson killed herself - either intentionally or by accident.

Spector, 67, rose to fame in the 1960s with the "Wall of Sound" recording technique, which revolutionized pop music.

But by the time he met Clarkson, he had aged into an eccentric, reclusive millionaire.

Clarkson, 40, was a statuesque beauty who idolized Marilyn Monroe but was beaten down by rejection.

Jurors heard of her decision to go home with Spector for a drink after her shift as a nightclub hostess ended. Little more than three hours later, she was dead.

What happened in those three hours was never clear. Spector did not testify, and prosecutors stated no motive for him to kill her other than her apparent decision to leave the house.

No prosecution forensic expert was able to place the gun in Spector's hands. But blood spatter on his coat and in his pants pockets were analyzed by prosecution experts to suggest that it showed he was the shooter.
By Linda Deutsch