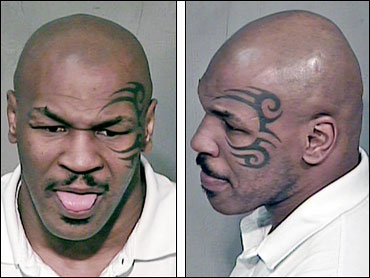 Former heavyweight champion Mike Tyson pleaded guilty Monday to charges of drug possession and driving under the influence stemming from a traffic stop last year as he was leaving a nightclub.

Tyson quietly acknowledged to a judge that he had cocaine and was impaired when he was stopped for driving erratically in Scottsdale on Dec. 29.

He pleaded guilty to a single felony count of cocaine possession and a misdemeanor DUI count and faces up to four years and three months in prison when he is sentenced Nov. 19. A felony charge of possession of drug paraphernalia and a second misdemeanor DUI charge were dropped, according to the terms of a plea agreement.

"It's obvious this was a crime he was committing against himself," Chesnoff said.

Police stopped Tyson after the boxer had spent the evening at Scottsdale's Pussycat Lounge. An officer said he saw Tyson wiping a white substance off the dashboard of his black BMW, and that his speech was slurred. Authorities said they found bags of cocaine in Tyson's pocket and in his car.

Tyson told officers later that he used cocaine "whenever I can get my hands on it," and that he preferred to smoke it in Marlboro cigarettes with the tobacco pulled out, according to court documents. He also told police that he used marijuana that day and was taking the antidepressant Zoloft, the documents state.

Since his arrest, Tyson checked himself into an in-patient treatment program for what his lawyer called "various addictions." Defense lawyer David Chesnoff had said previously that he had tried to keep the boxer out of prison.

In 1986, Tyson became the youngest heavyweight champion in history when, at 20, he knocked out Trevor Berbick. He lost his title four years later when he was knocked out by James "Buster" Douglas. By 1997, Tyson's career hit a low point when he bit Evander Holyfield's ear during a fight.

Tyson, 41, recently had been trying to revive his career with a series of boxing exhibitions.

County Attorney Andrew Thomas said earlier this year that Tyson should be put behind bars if convicted, noting that Tyson was convicted of rape in Indiana in 1992 and pleaded no contest to misdemeanor assault charges in Maryland in 1999. "He has run out of second chances," Thomas said.
By Chris Kahn