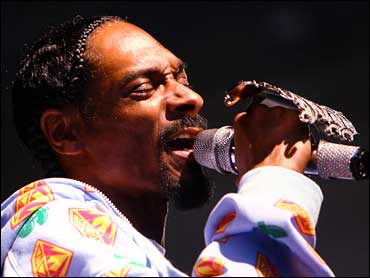 Snoop Dogg pleaded guilty Thursday to one count of felony possession of a dangerous weapon and was sentenced to 160 hours of community service and three years probation, his attorney said.

Snoop Dogg, 35, was arrested in September 2006 after the discovery of a collapsible baton in his computer bag at John Wayne Airport in Orange County.

"His attorney, Donald Etra, said the felony conviction would be reduced to a misdemeanor after one year if Snoop Dogg does not violate the law.

"We are very pleased with the outcome," Etra said. "Snoop's goal is to make music, not make court appearances."

In the plea deal, Snoop Dogg was also ordered to make a $10,000 charitable donation, Etra said.

"He wants to get on with his life," Etra said. "He will continue his music and his filming and performing."

The case is Snoop Dogg's second in the past year. He was arrested at Bob Hope Airport in Burbank on Oct. 26 on suspicion of transporting marijuana. Police later found a gun at his home.

The rapper, born Cordozar Calvin Broadus Jr., pleaded no contest in April to felony gun and marijuana charges and agreed to five years' probation and 800 hours of community service.

The cases marked the end of a relatively long trouble-free stretch for Snoop Dogg. He had burnished his image in recent years with appearances in mainstream movies and by starting a youth football league.

Snoop Dogg was convicted in 1990 of cocaine possession and charged with gun possession after a 1993 traffic stop. In 1997, he pleaded guilty in exchange for three years' probation and a promise to make public service announcements against violence.

He was acquitted of a murder charge in 1996 after the death of an alleged street-gang member killed by gunfire from the vehicle in which Snoop Dogg was traveling.