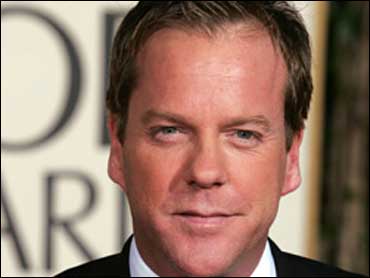 The 40-year-old actor was pulled over at around 1:10 a.m. in western Los Angeles, after officers spotted him making an illegal U-turn, said Officer Kevin Maiberger. He reportedly tested over the state's legal blood alcohol limit of .08 percent.

Sutherland was arrested on a misdemeanor charge of driving under the influence and taken to a Hollywood station, police said. she said. He was released around 4 a.m. after posting $25,000 bail, according to Sheriff's Department records.

Maiberger said Sutherland was scheduled to appear in court Oct. 16.

Sutherland plays Jack Bauer on the Emmy-winning Fox TV series "24." The series is set to return to the air in January.

Sutherland won a best actor Emmy award last year for his "24" performance. He has been nominated for an acting Emmy several times and has won several other awards, including a Golden Globe, for this role. He is the son of actor Donald Sutherland.