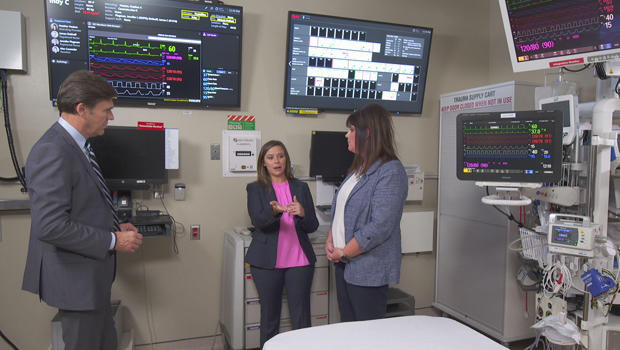 COVER STORY: Epic, the software company that's changed the sharing of medical records (including, probably, yours) | Watch Video
Correspondent Lee Cowan reports on an unusual Wisconsin company that is changing the way medical records are kept, accessed and disseminated.

ALMANAC: "Remember the Alamo!" | Watch Video
February 23, 1836 marked the beginning of the Mexican army's 13-day siege upon the Alamo mission in what is today San Antonio, Texas. Jane Pauley reports.

ART: Assemblage artist Betye Saar: Making the ordinary extraordinary | Watch Video
In recent months 93-year-old artist Betye Saar has been cast in the spotlight with major shows in New York City and Los Angeles, both met with glowing reviews. Saar's primary art form is assemblage – sculptures made from found items that she pieces together, often addressing spirituality and black oppression – that turn the ordinary into the extraordinary. Correspondent Serna Altschul reports.

BUSINESS: Bob's Red Mill | Watch Video
At 91, Bob Moore is an unexpected celebrity in the whole natural and organic foods industry, as the face of the company he founded, Bob's Red Mill. He talks with correspondent Luke Burbank about his recipe for success.

HARTMAN: A special bond (Video)
Eight-year-old Robbie Gay loves an underdog. An abused child who entered the foster care system before being adopted, he now goes to the Flagler County Humane Society in Palm Coast, Florida, determined to adopt as many dogs as his parents will allow. But not just any dogs. Steve Hartman reports.

COVER STORY: George Washington's turbulent retirement | Watch Video
Through eight grueling years of the Revolutionary War, and another eight as the first President of the United States, George Washington was sustained by a dream, of the day he would return to Mount Vernon, his beloved plantation high above the Potomac River, where at 65 years old he aspired to a peaceful retirement as a farmer. But that's not quite how it turned out. His post-presidency was filled with controversy, intrigue, and personal torment. CBS News chief Washington correspondent Chip Reid visits Mount Vernon, and talks with Jonathan Horn, author of "Washington's End: The Final Years and Forgotten Struggle."

BOOK EXCERPT: "Washington's End," on the final years of the father of our country

MOVIES: Richard Dreyfuss on facing down sharks, aliens, and his own demons | Watch Video
The Oscar-winning star talks with Turner Classic Movies host Ben Mankiewicz about success, failure, and his goal to become a better person.

EXTENDED INTERVIEW: Richard Dreyfuss on "American Graffiti," "Jaws," and civics classes
An expanded transcript of Turner Classic Movies host Ben Mankiewicz's conversation with the Oscar-winning actor, who talks about his apprenticeship in 1960s TV; George Lucas and Steven Spielberg; and what Civil War general he would like to play

HISTORY: The Battle of Iwo Jima, 75 years ago | Watch Video

OPINION: Faith Salie: There's no "I" in "Team," but there is a "ME" | Watch Video
The "Sunday Morning" contributor says the increasingly indiscriminate use of the term "Team" among work colleagues can be self-serving to a team's "Leader."

ART: Keeping a classic technique of painting alive in Florence | Watch Video
At his studio Charles Cecil teaches the "sight-size" method of portraiture developed during the Renaissance. Seth Doane reports.

CALENDAR: Week of February 24 | Watch Video
"Sunday Morning" takes a look at some notable events of the week ahead. Jane Pauley reports.

NATURE UP CLOSE: Marine biology at Monterey Bay
The waters off the California town made famous by John Steinbeck's "Cannery Row" feature one of the most productive and diverse marine ecosystems in the world.

TAKE FIVE: Arts & events around the U.S. (February 21)
Check out the "Sunday Morning" listings of events this coming week.

​Q & A with Garrett Morris
Thanks for reading CBS NEWS.
Create your free account or log in
for more features.
View CBS News In
CBS News App Open
Chrome Safari Continue
Be the first to know
Get browser notifications for breaking news, live events, and exclusive reporting.