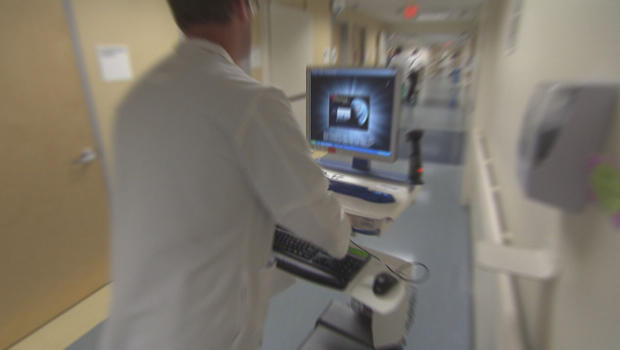 The self-described "Intergalactic Headquarters" of Epic, located in the middle of the farm fields of Verona, Wisconsin, doesn't look typical for a medical software company. It's as much theme park as anything – "Alice in Wonderland" kind of stuff. The workspaces there can be in railway cars or subway cars, tree houses and gingerbread houses. Even its employee cafeteria looks like something written about in storybooks. "I walked through and was like, 'What is this?'" laughed employee Peg Horner.

Never heard of Epic? Ask your doctor, because it's their software that handles the private medical records of about 60 percent of the patients in the country (including, probably, yours).

"One of the things that strikes me is that that Epic has such a big reach, it really impacts so many people's lives, and yet so many people have never heard of Epic," said correspondent Lee Cowan.

"Yes, it's behind-the-scenes," said Judy Faulkner. "We haven't advertised. We haven't put out press releases, and I don't know if that was a good thing to do or not."

Faulkner, a computer software engineer and admitted nerd, is the 76-year-old genius behind Epic. She built this curious place in her own curious image. A hint of her personality was revealed last year when, to celebrate Epic's 40th anniversary, she dressed as if she were back in the 1970s. "That's far out!" she remarked.

She's a little far out, too ... far out in front. She not only built a giant tech company from the ground up, but in the process made herself one of the richest self-made women in the world.

"We have to compete with Facebook, Google, Microsoft, Apple, etc.," Faulkner said. "And get a lot of acceptance because people look around and say, 'I think I'd like to work here.'"

There are nearly 10,000 employees at Epic; that just about doubles the population of Verona. It's a young place; average age is about 26.

Peg Horner and Niklas Bostrom could have worked in sunny Silicon Valley, but they chose to come to wintery Wisconsin instead, because, they say, as far big tech companies go, Epic is doing more than just building phones.

"I feel like we have an impact to make," Horner said, "and it's something that I actually really value about here. I don't feel like I'm just clocking and clocking out."

Bostrom said, "We're not here to just grind out on something that's not really doing anything. It's making other people be able to be healthy and happy."

It was 1979 when the company started, in a basement with just two employees. The goal: to move patient records from over-stuffed, dog-eared manila folders to digital records accessible with the click of a mouse.

No one had spent much time figuring out how to get a computer to handle all that data, but Faulkner always had a way with computers, and engineered a program herself.

"I used to like, when I was a kid, to play with clay, and makes things out of clay," she said. "And I always thought of computer programming as clay of the mind. The first time I did something, there it was on the screen, and I was like, Wow. It's very creative."

In the decades that followed it grew from the mundane to a system that is now integral to patient care in nearly every major U.S. health system. Its ubiquity means that now you can go almost anywhere to be treated, and your medical records will likely follow you.

In fact, you can now check lab results, re-fill medications, make appointments, even share your medical records right from an Epic app, said engineer Sean Bina. "All of this data was never available in the past, and now you can see it all on your phone," he said.

Paper records served us well for centuries, but boy, what a rat's nest of data.

Dr. Steve Peters, a pulmonary critical care physician at the Mayo Clinic in Rochester, Minnesota, showed Cowan copies of what the old detailed paper records used to look like, and how they used to travel. Records from Mayo Clinic patients used to fly around from room to room in pneumatic tubes.  "In this case the patient's getting blood drawn, they're going to a surgery visit, they're going to pain clinic, they're going to mammography. It's the old days I don't want to rush back to!" Dr. Peters laughed.

"There must've been miles and miles of tubing?" asked Cowan.

"Correct. It was like arteries inside of the building."

It was state-of-the-art in record-keeping at the time, so it makes sense that the Mayo Clinic would end up today being the single-biggest client of Epic, spending over a billion dollars over the next several years to integrate its systems.

Cowan asked, "How much is this going to change things?"

"We've been keeping track of the diagnoses of the Mayo Clinic patients since before we had electronic records," Dr. Peters said. "But the ability to have it all coming from one source makes it a lot easier. Without good access to data, you really are flying blind."

The Mayo Clinic's trauma rooms now have more screens than a Best Buy. Epic's Mallory Heinzeroth worked with Dr. Heather Heaton to customize a system that allowed critical patient information to be displayed on those screens all at once.

"The data's getting monitored from the patient who's on the table, going into their record in the computer, and then being presented, real-time" Heinzeroth said.

With all that data at your doctor's fingertips, though, their fingertips can be pretty busy. Some say entering all of that data on the Epic system is too much, and if you've been to a doctor lately, you know it can feel like they spend as much time entering data on a keyboard as they do on you.

But Dr. Peters says, get used to it.  "It's like blaming the word processor for a homework assignment for a student who has to write a term paper. It is where the documentation has to go," he said.

"The technology isn't the enemy? It's just the reality?" asked Cowan.

Epic is working on a solution, however, that would free up the doctor altogether – a sort of Alexa of medical records.

"And how would that work?" Cowan asked Faulkner.

"I know you don't store the data, but I think some people think you probably do, so how do you handle the privacy concerns if all this information is out there floating around?"

"That is such a good question. I think it makes sense to be a little bit worried," Faulkner said. "But I was at a talk once where the man giving the talk held up paper medical records and said it was so easy to put on a white coat and walk into the chart room, and pull out any records you wanted, and walk out again.  Computerization is probably a safer way to do it. Not a perfect way, not 100%, but safer."

There's no shortage of imagination at the "Intergalactic" offices of Epic. Medical records don't sound all that fanciful, but in Judy Faulkner's mathematical mind, anything is possible.

"Really, it's technology and software development working together. I'm waiting for the decoder ring to come out!" she laughed.