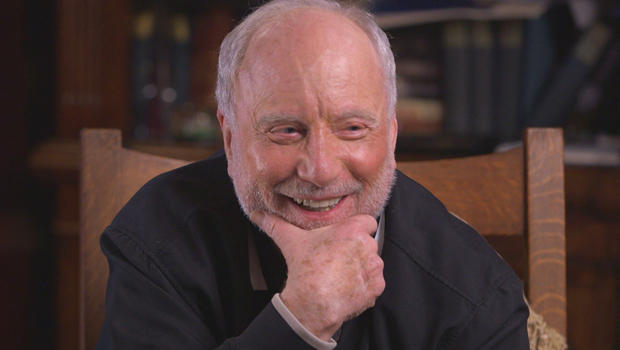 "We have many accomplishments to talk about," Turner Classic Movie host Ben Mankiewicz said to actor Richard Dreyfuss. "But I would like to start with failure."

In 2004, Dreyfuss, the Oscar-winning star of such films as "Jaws," "Close Encounters of the Third Kind" and "The Goodbye Girl," had signed on for the Mel Brooks musical "The Producers" in London's West End. "When Mel Brooks had called me and asked me to do it, I had said, 'Mel, I don't dance and I don't sing.' And he said, 'Oh, who cares? You're funny.' Six days before the first preview audience, I was fired because I didn't dance and I didn't sing."

Call it a hiccup in what has mostly been a lifetime of success.

After a brief one-line debut in 1967's "The Graduate," you might say Dreyfuss' career was on fire by 1973.  George Lucas directed him in "American Graffiti," along with a few other big names, like Ron Howard and Harrison Ford.

And then, Steven Spielberg called. "Steven had called me and said, 'I wanna meet you about 'Jaws.' Don't read the book.' To this day I've never read the book – that's how good an actor I am with directors!"

"He didn't want you to have any preconceived notions about how the character should be?" asked Mankiewicz.

"Yeah. And he told me the story and it was exciting. He said, 'You wanna do it?' And I went, 'No.' He said, 'Why?' And I said, 'Because I'd rather watch this movie than shoot it.' Because I'm an idiot! I mean, there's really no other explanation. I'm pretty stupid when it comes to certain things."

After turning Spielberg down, Dreyfuss landed what he thought was the best part ever written for an actor his age, "The Apprenticeship of Duddy Kravitz."

Mankiewicz asked, "So, best part ever for an actor your age. What happened when you saw it?"

"You've done your homework, haven't you? I thought that I had given the worst performance in the history of celluloid."

And after watching himself on-screen in 'Duddy Kravitz,' Spielberg's shark movie was suddenly far more appealing.

"You thought the performance in 'Duddy Kravitz' was so bad you reversed your decision of saying no to 'Jaws' and said yes to 'Jaws'?"

"Yes," Dreyfuss said. "I turned it down twice. I saw 'Duddy Kravitz.' I called Steven and begged for the part."

"You were terrified that 'Duddy' would end your career?"

So, he got on Spielberg's boat, and while they were still filming "Jaws," Dreyfuss started lobbying for the lead in Spielberg's next big film: "Close Encounters of the Third Kind":  "And I decided that I would badmouth every actor every born that could possibly play that role. And I did!"

"What would you say about De Niro?" asked Mankiewicz.

"'Gene Hackman's impossible to work with'?"

"Close Encounters" was a game changer in Hollywood. But for Dreyfuss, the other film he made in 1977 would be even bigger – a screen adaptation of a Neil Simon play.

"One morning a friend of mine calls and says, 'Did you hear that Bobby De Niro got fired this morning?'" Dreyfuss said.

"This is the movie he did right after 'Taxi Driver,'" said Mankiewicz.

"Right. And Mike Nichols was directing – what was it? 'Bogart Slept Here,' that's the name."

The chemistry between Dreyfuss and Marsha Mason dazzled Simon, won over the audience, and impressed Oscar voters.

"My agent called and said, 'You've been nominated for "The Goodbye Girl,"' I went, 'Wow,' and then I said, 'Who else is nominated?'  'Woody Allen, John Travolta, Marcello Mastroianni, and Richard Burton.' And I went, 'I'm gonna win.' And my agent went, 'Right.' And I said, 'I'm gonna win.' John Travolta was too soon. … Richard Burton had just passed the hump. If he had been nominated the year before they would've given it to him in a second and we all would've stood up and given him a standing ovation. No one was ever gonna give Marcello Mastroianni the best actor. And no one was gonna give Woody Allen best actor because it was the year of 'Annie Hall.'"

Mankiewicz said, "What actually impresses me most about you is, you know, you have all this wild success from, like, '73 to '78. And you get a substance abuse problem. And you get a famous one 'cause you're famous. And you recover from that, right? I imagine, incredibly difficult process."

"I could tell you all kinds of things that you don't have time for," Dreyfuss said. "But I decided to be a better person. And I think that that's a legitimate goal. And I like that about me."

Dreyfuss has publicly told a story about a longtime beef with Bill Murray that began on the set of 1991's "What About Bob," when Dreyfuss says that Murray, drunk, threw an ashtray at Dreyfuss' head and missed.

Now, Dreyfuss has stopped telling that story, and he says he's ready to forgive. "I haven't done it with Bill. And I will. We've never crossed paths. And one day I will write him a note and say, 'As far as I'm concerned, it's over.'"

Dreyfuss is 72 now, living in San Diego. You can still see him in upcoming movies, but you'll never see his Oscar out on display in his house.

Mankiewicz said, "I literally walked into you house here, into the room where we're taping this, looked at the wall and said to the producer, 'Where's the Oscar?' Which prompts me to ask, where's the Oscar?"

After a career facing down sharks, aliens and his own demons, Richard Dreyfuss has somehow managed to stay cool.