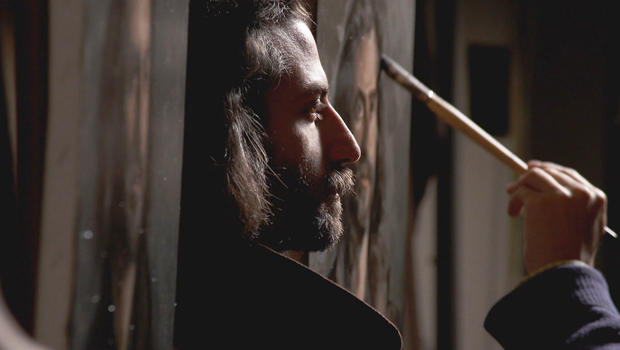 The faint smell of oil paint and turpentine, years and years of it, wafts through this studio. It's a sanctuary – no ringing cellphones – and a throwback, a place to learn an art almost lost to time.

Correspondent Seth Doane asked Charles Cecil, "If you weren't teaching this technique, what would happen?"

"This technique would be dead, I think," he replied.

The master here is Cecil, an American who can trace his teacher's teacher back to the great portrait artist John Singer Sargent.

In his small school for about 20 students, we saw a dance of sorts – a back-and-forth from the canvas that is key to this special technique he's been passing on for more than 35 years:

"The great advantage of sight-size is the idea of having the canvas alongside," he said. "What I see up close, of course, is not what I see at a distance. What I see up close are her eyes, but her lips are entirely out of my focal range. What I have to do is stand back, so I can see the image as a whole. ... From back there, I can see the whole work together."

This back-and-forth method is part of a style of painting called "sight-size." "Sight-Size literally means drawing to scale," said Cecil. "This developed during the Renaissance and was used by the British School of the 18th Century and by John Singer Sargent. That's where we get it, from him."

"And how does the portrait, the end product, change?" asked Doane.

"It's the visual impression as seen from a distance."

Pointing to one student's work, Doane said, "It's interesting, even you're looking at how much this tiny little white sparkle makes such a difference, it brings it alive," said Doane.

"That's the soul," the teacher said.

Cecil is a purist. While many portrait artists use photos of their subjects, there are no photographs here. He argues a portrait should not be merely an exact reproduction; it should capture the soul of the sitter.

Student artist Emily Rogers, 23, is in her second year. She explained to Doane the little "glints" she was applying. "Yeah, they're quite hard. It's funny, before you put them, it kinda looks a bit kind of dead sometimes, then just brings it to life – one little mark."

Just down from her, Francis Kelleher, a 30-year-old who is four-and-a-half years into his studies, was working on perfecting the technique of chiaroscuro (Italian for "light and shadow"). He used the most technologically-advanced implement they employ: a mirror.

"So, the main purpose of the mirror is to refresh your perspective," Kelleher said. "And we generally use it because over the process of the three hours that we normally work for, the eye becomes tired. And so you stop seeing your mistakes.

"By seeing it with a fresh eye, it's the same effect it would be if I came back to work in three or four days. I'm seeing it afresh, it's brand new to me, and I can immediately spot the mistakes."

"A mirror is so important," said Cecil. "We all make the same mistakes, and that's what is comforting. Because the human eye stumbles in the same way."

The students, and Cecil himself, are not only surrounded by art inside; this school is located in Florence, birthplace of the Renaissance.

Doane asked, "You think seeing all of this art around you affects you as an artist?"

"It does, indeed. Every day, with every breath," said Cecil.

He first came to this Italian city in the heart of Tuscany in his twenties, and vowed to return by age 30. He did, and it's been home ever since.

"I ride my bike from my home on Via Pandolfini, which is the street where Dante grew up, and from which he was exiled," Cecil said. "I tend to weave through the mass tourism, but there are invariably those great palaces, the great windows as well – just the great design that you see on the way – and you glimpse. And one never tires of that."

His studio, in the oldest atelier in Florence, shares a space with Raffaello Romanelli, whose family of sculptors has been here for about 200 years.

Romanelli said, "All the great sculptors were painters, too."

And there is value to studying the past. Cecil said we are inundated by photos today from smartphones and selfies, and it's ruining painting.

"We're just seeing so many images, we've lost appreciation for them?" asked Doane.

"Yeah, yeah," said Cecil. "In fact, I mean, I don't think we spend so much time looking at [them], unless it's a Leonardo, unless we're told to look at a masterpiece, I'm not so sure that we would spend the proper time looking at it the way that, once upon a time, that was the only image of reality we had."

Which is why he invites students to retreat from the technology and pace of the outside world to come here, bathed in a north light, and with that soft smell of oil paint, to find the rhythm of another time.

A history of Santa Barbara

Up next, recap and links
Thanks for reading CBS NEWS.
Create your free account or log in
for more features.
View CBS News In
CBS News App Open
Chrome Safari Continue
Be the first to know
Get browser notifications for breaking news, live events, and exclusive reporting.