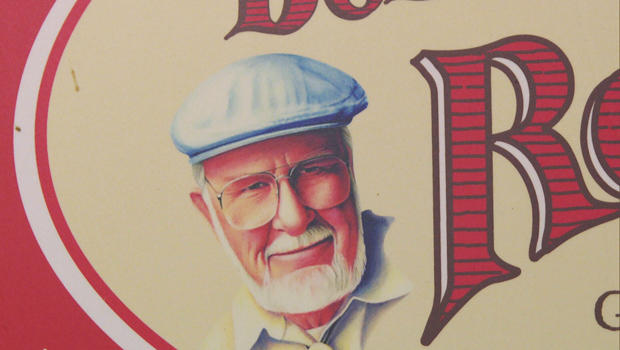 If you've strolled down the aisle of a grocery store recently, you've probably seen him staring down from a bag of flour with his white beard, trademark hat, and slightly quizzical look. It's the face of Bob Moore, founder of Bob's Red Mill.

Correspondent Luke Burbank asked, "What do people say when they come up to you?"

Not only is he not dead, but at age 91, he's thriving. Moore is an unexpected celebrity in the natural and organic foods industry.

"If I had my life to live over, I would have started way earlier in this business," he said. "I mean, you know, I started in the middle of my life."

Moore was in his 50s in Southern California working at gas stations and auto centers when, on a whim, he walked into a library, and picked up a book that would change the course of his life. "I still read this about three times a year," he said.

The book, "John Goffe's Mill" (published in 1948), tells the story of a man who, without any prior experience, purchased and rebuilt an old grain mill. It inspired Moore to do the same.

Burbank asked, "Had the thought of running any kind of a milling operation ever crossed your mind?"

A crazy idea that eventually led him to Milwaukie, Oregon, where in 1978 he and his now-late wife Charlee set up Bob's Red Mill.

More than 40 years later, the company has come a long way, grinding out more than 400 products that are sold in more than 80 countries.

But if there's a signature product that Moore makes, a sort of favorite child, it would have to be his oatmeal.

Burbank asked, "How many years have you been eating this for breakfast for?"

"You don't get tired of good food. Come on!" Moore said.

Mix in some simple, healthy ingredients – flaxseed, banana, milk – and it turns out you've got a recipe for success.

And after a hearty breakfast like that, it's no wonder we couldn't keep up with Moore – a fast walker – when he took Burbank on a factory tour.

"Has anybody told you that you're 90 years old?" Burbank laughed.

Over the years Moore has also been ignoring would-be buyers of his company. Some online estimates put the company's worth at $100 million. But Bob was staying mum.

Burbank asked, "You know what your business is worth, right? Or do you not want to know?"

"I don't want to tell you," Moore laughed.

The other reason he won't sell? Because he's actually giving the company away – to his 500-plus employees … employees like Dave Geiter and Lucy Reyes, who – based on how long they've worked here – are all now part-owners of the company.

"I was able to put my kids through college because of that," said Geiter. "So, Bob really cares about us."

Burbank asked, "Do you ever tell people that you own Bob's Red Mill?"

So, now you know the story behind the face on the flour bag – the story of a man with a mill and a mission to spread good food. Turns out Bob Moore really is someone who cares.

"When you get right down to it, I really like doing this," he said. "I don't want to do anything else."

Nature up close: A plant that tricks butterflies
Thanks for reading CBS NEWS.
Create your free account or log in
for more features.
View CBS News In
CBS News App Open
Chrome Safari Continue
Be the first to know
Get browser notifications for breaking news, live events, and exclusive reporting.