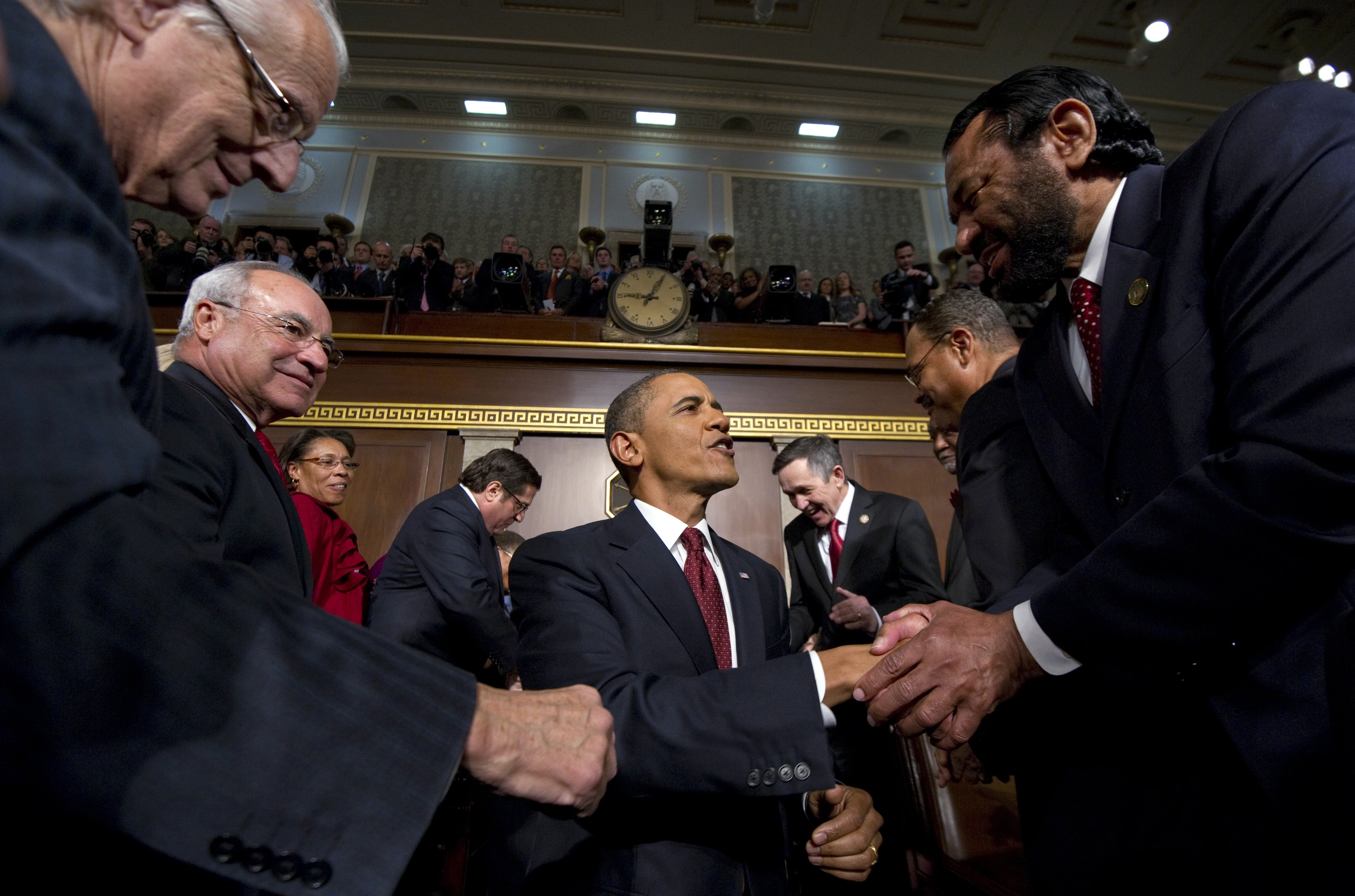 The central theme of President Obama's State of the Union address on Tuesday night was the notion that in America, everybody deserves a fair shake - and that his policies will help make sure they have one.

The central theme of Indiana Gov. Mitch Daniels' Republican response was that Mr. Obama has shown himself to be a divisive failure that has chosen class warfare and stifling big government over economic progress.

The outcome of the 2012 presidential election depends in large part on which of those arguments Americans decide to embrace.

The centerpiece of Mr. Obama's call for economic fairness was the so-called "Buffett Rule," which is predicated on the notion that the wealthy investor should pay as much as his secretary in taxes. (Mr. Obama said Tuesday night that anyone making more than $1 million per year should pay no less than a 30 percent tax rate; we learned earlier in the day that one of the chief contenders for the GOP presidential nomination, Mitt Romney, paid less than 14 percent on $21.7 million in income in 2010.)

"Now, you can call this class warfare all you want," he said. "But asking a billionaire to pay at least as much as his secretary in taxes? Most Americans would call that common sense."

Class warfare is exactly what Republicans are calling it. House Speaker John Boehner - who sat behind Mr. Obama during the speech, along with Vice President Joe Biden - suggested earlier in the day that the president's politics of "division and envy" are "almost un-American." Daniels said that "no feature of the Obama Presidency has been sadder than its constant efforts to divide us, to curry favor with some Americans by castigating others."

Mr. Obama would seem to have the advantage in this fight: A CBS News/New York Times pollout Tuesday found that 55 percent of Americans think upper-income taxpayers pay less than their fair share. And in the wake of the emergence of the "Occupy" movement, a Pew survey earlier this month found that two in three Americans now see a strong conflict between rich and poor. Even the two leading Republican presidential candidates, Romney and Newt Gingrich, have gotten into a fight over whether Romney's former company Bain Capital engages in heartless capitalism that rewards the rich while leaving average Americans behind.

That's why Republicans are not eager to spend the year fighting on Mr. Obama's terms. Instead, they want to put the focus squarely on the fact that Mr. Obama has spent three years presiding over an economy that has yet to recover from the 2008 financial crisis. Daniels said Tuesday night that the president "cannot claim that the last three years have made things anything but worse: the percentage of Americans with a job is at the lowest in decades. One in five men of prime working age, and nearly half of all persons under 30, did not go to work today." (Daniels' full remarks are at left; the president's are above.)

This is the argument that Republicans want to have. A CBS/NYT poll earlier this month showed that just 40 percent of Americans approve of Mr. Obama's handling of the economy, while 54 percent disapprove. Only 35 percent say the president has made real progress on the economy, which voters overwhelmingly say is their top concern. If Republicans can hammer home the notion that Mr. Obama has failed to guide the economy effectively - in a way that has harmed all Americans, rich, poor and middle-class - they will likely win the election.

From a political perspective, good news for the economy is bad news for the Republicans: Amid signs that the economy is improving, the survey showed a slight uptick in perceptions of the condition of the economy- and Mr. Obama's handling of it. Still, the economic picture is unlikely to be rosy in November, and Republicans know their best hope is to convince Americans that Mr. Obama has squandered his opportunity to turn things around.

That's the reason you heard Daniels speaking in relatively dour terms Tuesday night. "When President Obama claims that the state of our union is anything but grave, he must know in his heart that this is not true," he said at the outset of his remarks. You can expect to hear the GOP hammering home that notion right up until Election Day.

The other key plank in the GOP offensive against Mr. Obama is the notion that he wants an overregulating, nanny-state government that doesn't let American businesses succeed and American individuals make their own choices. That argument has long been effective for Republicans, which is why you heard Mr. Obama note Tuesday night that he "approved fewer regulations in the first three years of my presidency than my Republican predecessor did in his." It's also why he uttered a line you'd expect to hear from a Republican: That he believes "[g]overnment should do for people only what they cannot do better by themselves, and no more."

But that's playing defense, and Mr. Obama knows he needs to play offense. That's why he brought Buffett's secretary to his speech Tuesday night, and it's why he's embarking on a three day swing-state tour on Wednesday to hammer home his State of the Union arguments. The president and his re-election team believe that a focus on income inequality and economic fairness are good politics. They also know that while Romney may well be a formidable opponent if he gets the nomination, a focus on income inequality could transform what was supposed to be the former Massachusetts governor's biggest strength - his time in the business world, which helped him reach a net worth in the hundreds of millions of dollars - into a weakness that puts him on the wrong side of an argument they are eager to have.