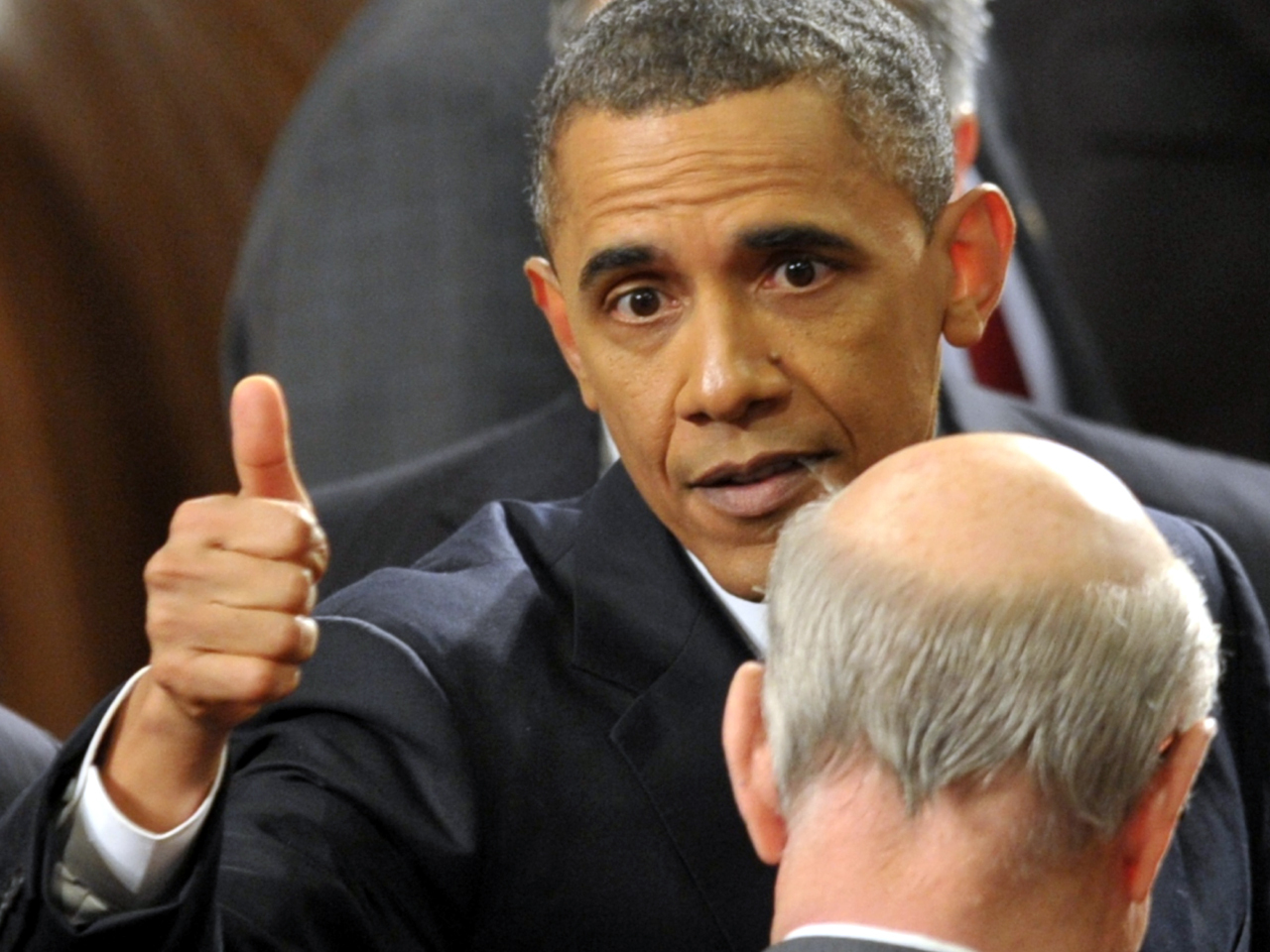 WASHINGTON - The secret was still intact when President Obama, entering the House chamber Tuesday evening to deliver his State of the Union speech, pointed at his Pentagon chief and said, "Good job tonight."

Unknown to a global television audience watching the annual Capitol Hill ritual, a bold U.S. raid was still playing out half a world away with an elite Navy SEAL team's rescue of two hostages in Somalia, one of them an American. It was the same unit that killed al Qaeda leader Osama bin Laden, two U.S. officials said Wednesday.

Publicly, Mr. Obama did not tip his hand during his speech, though microphones picked up his congratulation to Defense Secretary Leon Panetta as he entered the House chamber. Mr. Obama pointed his index finger to Panetta and said, "Good job tonight. Good job." Panetta smiled broadly.

Mr. Obama had learned shortly before that American aid worker Jessica Buchanan and Poul Hagen Thisted, a Dane, were safely in U.S. military hands. Immediately after the speech, Mr. Obama telephoned Buchanan's father from the Capitol to tell him that she was safe and "on her way home," according to the White House.

U.S. officials told CBS News national security correspondent David Martin that the mission's timing was not determined by the State of the Union but instead by weather and the new moon.

A Pentagon spokesman, Navy Capt. John Kirby, said that although the two hostages were safe by the time Mr. Obama gestured to Panetta, the secretive rescue mission had not yet been completed.

Kirby and other Pentagon officials declined to reveal details of how the rescue was conducted, although they said the Americans originally intended to capture alive and detain the kidnappers. Instead, for reasons that have not been explained publicly, they killed all nine of them.

Panetta's press secretary, George Little, said the kidnappers were heavily armed, with explosives "nearby." He said neither the two hostages nor any members of the U.S. assault team were injured.

Little said one factor in deciding to go ahead with the rescue was that Buchanan's medical condition had been deteriorating. He said it was believed that her condition could be life-threatening. Neither Kirby nor Little would say more about her medical problem or say how the U.S. learned of it getting worse.

This was not the first time Mr. Obama exhibited his aptitude for compartmentalization. As the bin Laden operation was set in motion, the president visited with families in Alabama affected by tornados and then met with Rep. Gabrielle Giffords and her astronaut husband, Mark Kelly, who coincidentally were in the audience during Tuesday night's address.

During that same spring weekend, Mr. Obama also joked at the White House Correspondents' Association dinner. No one except the president's inner circle knew what was playing in the background. The following day, May 1, 2011, Mr. Obama announced that bin Laden was dead.

In his address Tuesday night, the Navy SEALs also played a major role, providing a kind of coda for the president's call for unity in Washington.

"When you're marching into battle, you look out for the person next to you, or the mission fails," Mr. Obama said in his speech. "When you're in the thick of the fight, you rise or fall as one unit, serving one nation, leaving no one behind."

In a predawn White House statement, Mr. Obama praised U.S. Special Operations Forces who rescued Buchanan and the Dane, who had been kidnapped at gunpoint by Somali pirates in October.

"As Commander-in-Chief, I could not be prouder of the troops who carried out this mission, and the dedicated professionals who supported their efforts," Mr. Obama said in a statement.

Panetta, in a statement, said Buchanan and Hagen Thisted "have been transported to a safe location where we will evaluate their health and make arrangements for them to return home." He said the two hostages were not harmed during the operation, and no U.S. troops were killed or injured.

"This was a team effort and required close coordination, especially between the Department of Defense and our colleagues in the Federal Bureau of Investigation," Panetta said.

On NBC's "Today," Vice President Joe Biden said the U.S. decided to move after determining that Buchanan's health "was beginning to decline."

"We wanted to act," Biden said.

Mr. Obama approved the mission Monday. On Tuesday, Mr. Obama's top counterterrorism adviser, John Brennan, gave the president half a dozen updates on the movement of forces and the progression of rescue operation.

About two hours before Mr. Obama was scheduled to begin delivering his State of the Union address, Brennan told him Buchanan and Thisted were safe and in U.S. hands.

After delivering his address, Mr. Obama called Buchanan's father. In his statement Wednesday, Mr. Obama said he told John Buchanan "that all Americans have Jessica in our thoughts and prayers, and give thanks that she will soon be reunited with her family."

"The United States will not tolerate the abduction of our people, and will spare no effort to secure the safety of our citizens and to bring their captors to justice," Mr. Obama said. "This is yet another message to the world that the United States of America will stand strongly against any threats to our people."

Biden had high praise for the special forces. "It takes your breath away, their capacity and their bravery," he said on ABC's "Good Morning America." "These guys and women are amazing."