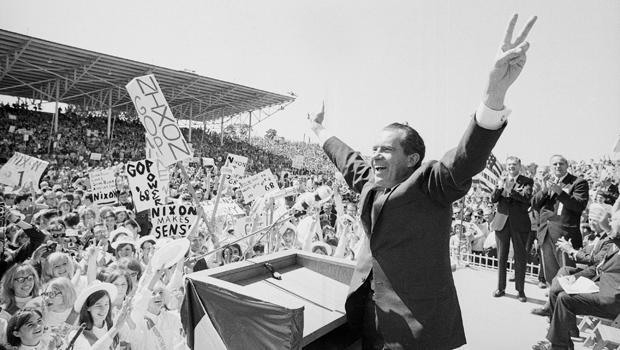 "You won't have Nixon to kick around anymore, because, ladies and gentlemen, this is my last news conference." It was hard to imagine, in 1962, that Richard Nixon would be worth kicking around anymore. Two years earlier, the former Vice President had lost a razor-thin presidential election to John F. Kennedy, and he had just lost his second high-profile election, this time to be Governor of California.

Even Pat Buchanan, who would become one of Nixon's speechwriters, knew rehabilitating him would be tough. "He was a loser; he had lost and lost and lost. The only way you that you get rid of this loser image is to win!" Buchanan laughed.

But by 1968, the stage was being set for a "law and order" candidate like Nixon.

"The country was prerevolutionary in 1968," said historian Evan Thomas, the author of "Being Nixon: A Man Divided" (Random House). "There were race riots, riots on campuses. The country was divided in a way that it had not been since the Civil War, worse than it is today."

"Nixon was lucky in that the Republican Party was falling apart around him," said Thomas. "And Nixon, the old pro, was there to fill the vacuum."

"So, was Nixon lucky or good?" asked correspondent Richard Schlesinger.

"All great politicians are lucky and good, and Nixon was both."

Lucky for Nixon, the Democrats were being divided on the left by the Vietnam War, and on the right by George Wallace, who was siphoning off voters attracted by his race-based populism.

Nixon was ready to get kicked around again, but he still had a lot of kick left in him. He told CBS News' Mike Wallace, "Those who have lost elections in the past have come back to win. I hope to come back to win."

The plan was to run against Lyndon Johnson, the incumbent president. But just two months after Nixon got into the race, luckily for him everything changed. Johnson announced on March 31, 1968. "I shall not seek, and I will not accept, the nomination of my party for another term as your president."

Buchanan recalled telling Nixon on board the candidate's plane that, after his Republican competitors had dropped out, now the Democratic president had, too.

"Did he seem surprised?" asked Schlesinger.

"Oh, he was stunned. We were stunned!" Buchanan said.

Nixon accepted the Republican nomination in August of 1968, just a few weeks before his biggest break yet. The Democrats had their calamitous convention in Chicago. While the cops were outside clubbing demonstrators on the head, delegates were inside shooting themselves in the foot.

Thomas said, "Nixon loved every minute of the Democratic convention. 'Don't elect those crazy Democrats; you're going to have riots in the streets. Elect me, and I'll bring some order and quiet.'"

Vice President Hubert Humphrey won the nomination, but as his old friend, then-Senator Walter Mondale remembers, it didn't mean much.

"He finally had his chance, and the nomination was worthless," Mondale said.

Worthless?  "Well, proved to be worth something, but at the time, it looked like it was poisoned."

By contrast, Nixon's campaign ran with military-grade discipline. He traveled with an entourage of managers and message men, overseen by John Mitchell. "We do operate, I believe, in an orderly fashion, and that comes from preparation," Mitchell said then. "We have planned it and programmed it and have had the time to carry it out."

It was all working. Nixon was up, way up in the polls, until September 30, when Humphrey turned the tide with a speech repudiating President Johnson's war policy. "I want to talk with you about Vietnam," the Vice President said. "As president I would stop the bombing of the North, as an acceptable risk for peace."

The announcement would narrow the polls dramatically. Nixon immediately had an unexpected order for his personal aide, Dwight Chapin: "Get President Johnson on the phone."

"He said it to me," Chapin said. "And I had no idea what to do! So I asked Rose Woods, who was Nixon's secretary, She said, 'Call 456-1414 in Washington. That's the White House number, and ask to speak to the president.'"

President Johnson recorded the call, in which Nixon said of Humphrey's announcement, "This will be interpreted, as I'm sure you know, as a dramatic move away from the administration. It's my intention not to move in that direction."

Schlesinger asked Chapin, "Did you have a sense of how strange that call was?"

"I felt that it was one of the most intriguing political maneuvers that I had ever heard," he replied. "For Richard Nixon to be calling Lyndon Johnson and he's telling the president, 'I'm with you,' not exactly the words, but implying it."

Mondale thinks it's evidence that Johnson might have been rooting against his own party's nominee, his own vice president.

Schlesinger asked, "Do you think Johnson wanted Humphrey to win?"

"Maybe. I'm not sure," Mondale said. "I think at the end, the last two weeks, he wanted him to win. But I think the early part of the campaign, he was mad at Humphrey. He thought Humphrey wasn't being loyal enough."

"Do you think Johnson wanted Nixon to win?"

"I thought so for a while, because he was doing things to help Nixon," Mondale said.

But Johnson ended up helping Humphrey come within a hair of winning, with a speech on October 31, five days before the election, announcing a halt to the bombardment of North Vietnam.

Buchanan said, "I thought we had lost. Humphrey had momentum."

"I thought we could make it," said Mondale.

"I bet those must have been very heady days," said Schlesinger.

"Yes. Might get a Minnesotan president!" laughed the Minnesotan who'd succeeded Humphrey in the Senate in 1964.

Richard Nixon had known bitter defeat in elections even closer than this, and he was magnanimous in victory. He had Dwight Chapin set up a meeting with Humphrey just days after the election, and as the meeting ended, Chapin saw a side of Nixon few others ever saw.

"The men had their arms around one another," Chapin said. "Humphrey was sobbing. Nixon was patting him on the back saying, 'Hubert, you know, everything's gonna be okay. You and Muriel [are] gonna have a great life.' Humphrey chokes out, 'If there's anything that I can ever do, I wanna be doing it for you.' It was such a poignant moment."

President Richard Nixon was reelected in 1972.  Two years later, the Watergate scandal led to his resignation.

Dwight Chapin served eight months in prison in connection with Watergate. He is writing a memoir.

Walter Mondale served as Vice President in the Carter administration and then ran unsuccessfully for president in 1984. At age 90, he still teaches at the University of Minnesota.