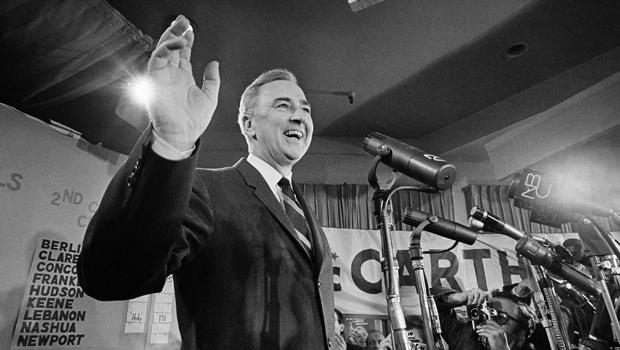 The year 1968 brought a startling development almost every month -- and the month of March was no exception. "CBS This Morning"' co-host John Dickerson takes us back:

Fred Harris described 1968 as "really a horrible year for the country."

Joseph Califano said, "It was a hell of a year."

President Lyndon Johnson called it "a year of continuous nightmare."  And he upended it with an astonishing decision.

"It is true that a house divided against itself is a house that cannot stand," he said.

As 1968 began, Johnson was in his fifth year in office. He had become president following the assassination of John F. Kennedy, then was elected in 1964 by one of the largest margins in history. Now he was running for re-election.

"He could be compassionate and loving and caring about the poor, and then he could be cruel and tough and ruthless," said Califano, Johnson's top domestic aide. "He used to say, 'People are moved by love and fear. You have to figure out the right mixture.'"

Johnson had passed sweeping civil rights legislation and anti-poverty programs, but by 1968 the war in Vietnam overwhelmed him. While trying to engineer peace talks, he continued to send more troops.

Hey, hey, LBJ,
How many kids did you kill today?

Former Oklahoma Senator Fred Harris, a Johnson advisor, said, "That really affected him. He began to feel really beleaguered. I think he had this deep feeling, 'I'm not gonna be the president that lost Vietnam.'"

Johnson had the power of incumbency, which kept his chief rival, Senator Robert Kennedy, and other Democrats from challenging him. But one largely unknown candidate did take him on.

Minnesota Senator Eugene McCarthy decided to run for president at the end of 1967. His platform was, basically, end the war.

Dickerson asked, "How big of a deal was it that he was running against a president of his own party?"

"Well, you know, it was thought to be a futile effort," replied Harris.

Sam Brown, who was the student coordinator of his campaign, was with McCarthy from the start. "A lot of us liked him because he was intellectual," Brown said. "He didn't play the game the way most politicians played the game. He was more likely to travel with a poet than he was with an advance person. It was not your usual candidate!"

Brown moved his scruffy army of young people into New Hampshire ahead of the primary on March 12 -- fifty years ago tomorrow.

"If you wanted to come work for McCarthy in New Hampshire, you had to clean up your act," Brown said. "You had to cut your hair, you had to shave your beard, you had to dress respectably, you had to act respectably. So, it became kind of famous, that so-called 'Clean for Gene.'"

McCarthy had been expected to get 12 percent of the primary vote, at most. But Johnson's optimistic talk about progress in Vietnam had been shattered by the Tet Offensive. A campaign about the war became a campaign about the credibility of the Johnson Presidency.

McCarthy got 42 percent to Johnson's 48 percent.

"Did he beat expectations? Oh, yeah, hit it out of the ballpark by expectation standards," Brown said.

Bobby Kennedy smelled weakness, and decided to take on Johnson.

At the end of March, the chaos of Vietnam forced Johnson to deliver an address to reassure the nation. Joseph Califano and another aide worked on the speech: "And we both said, 'You know, there's no real ending.' And what did that mean? Somebody may be writing an ending for him, we thought."

In his speech the president said:

"I do not believe that I should devote an hour or a day of my time to any personal partisan causes or to any duties other than the awesome duties of this office, the Presidency of your country."

Califano said, "At the end, the world changed."

"I shall not seek, and I will not accept, the nomination of my party for another term as your president."

Johnson's shocking decision to quit the race was a desperate gamble born of exhaustion and the belief that without having to worry about politics, he could negotiate a final peace.

"Everybody was stunned," said Brown. "Nobody expected that."

Fred Harris was giving a speech during Johnson's address: "Somebody brought me a note: AP is reporting that Johnson has declared he's not running again. 'You wanna read that to the crowd?' And I said, 'No, I don't believe it!'"

The agonies of the next few months would almost rip the country apart. Four days after Johnson dropped out, Martin Luther King Jr. was assassinated.

Two months after that, Robert Kennedy was assassinated on the night he won the California primary.

Brown said, "After Bobby was killed, McCarthy essentially became a recluse for the next six weeks. I think he made the judgment that some of us  -- particularly younger ones in the campaign -- couldn't see, which was he wasn't gonna get the nomination."

McCarthy was right. In August, Democrats gathered in Chicago to nominate Vice President Hubert Humphrey. The city erupted in violence as anti-war protesters were met with a brutal response by police.

The Republican nominee was Richard Nixon. He ran against Humphrey as the law-and-order candidate, with a secret plan to end the war.

Nixon won. Johnson left Democrats wondering what might have been had he stayed in the race.

Harris said, "He would have wound up probably with a nomination and with the election."

Brown said, "It wasn't an automatic that he would lose. It would have been a tough row. But there was every chance he could win."

Instead, the war -- which would drag on for another six years -- had claimed another casualty: the presidency of Lyndon Johnson.