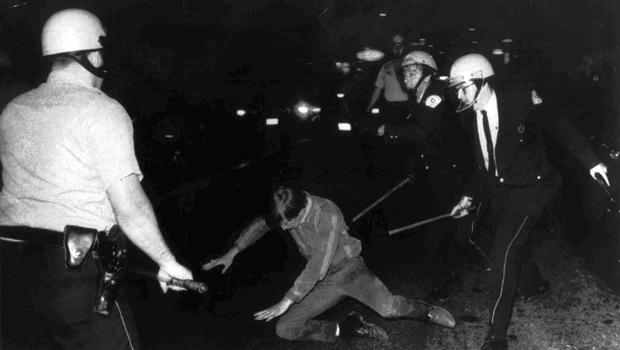 We're taking another look back at the year 1968 this morning, remembering the political earthquake that was the Democratic National Convention. Chicago-born Scott Simon, of NPR, is our guide:

Worlds collided at the 1968 Democratic Convention in Chicago: young and old, war and peace, law and order.

"You can't take that week in isolation," said Bill Daley. "'68, one of the most dramatic and traumatic years in the nation's history. And it kind of all rolled to Chicago, and you could feel it coming."

Daley, who would become President Obama's chief of staff, was a college student in 1968, and spent the convention at the side of his father, Chicago Mayor Richard J. Daley.

"We knew that there was going to be an enormous challenge on the streets; it was sort of the challenge to the system," Daley said. "And my father believed that he was the defender of the city."

With thousands of protesters expected, 12,000 Chicago Police officers were deployed, along with the National Guard.

On August 25, Walter Cronkite noted on air, "The Democratic Convention is about to begin in a police state. There just doesn't seem to be any other way to say it."

Not long before joining CBS News, Bob Schieffer was a young reporter in 1968, attending his first national convention: "The country was being torn apart by the Vietnam War," he said. "There were demonstrations every day, all over the country. And then here comes the Democratic Convention in Chicago.  It was supposed to be a place where the Democrats were going to get their business all together. But everybody knew it was going to be difficult."

The primaries had been explosive; President Johnson was forced out by the success of Senator Eugene McCarthy in New Hampshire. Robert Kennedy was assassinated the night he won the California primary. Vice President Hubert Humphrey didn't enter any primaries, but was favored to win the nomination.

"Hubert Humphrey was the establishment," Schieffer said, "and he represented the big bosses and the traditional Democratic Party, the politicians, the big city mayors. They were certainly not satisfied with Gene McCarthy; his sole campaign was, 'I'll end the war in Vietnam.'"

The city said, in a year of assassinations and riots, it couldn't grant permits to protesters to march on the convention or sleep in city parks.

Bill Jaconetti was a rookie policeman in 1968, posted to the protests in Grant Park: "We knew the convention was coming to town, and we knew that there was probably going to be some problems," he said.

"I had come home from being in Korea. I was stationed on the DMZ. And the next trip, all my buddies went to Vietnam."

Wednesday night, August 28: The confrontation that had been building all week, probably all year, burst open on the street between Grant Park and the convention headquarters hotel.

Jaconetti recalled, "The first deputy said, 'Clear the streets.' After about, I don't know, maybe five or six warnings, and then the final warning, he said, 'If you don't move out of the street, my officers are gonna clear the street.' And that's what we had to do on that night."

One bandaged witness described what happened next: "They were just swinging their clubs like just a bunch of idiots."

Jaconetti recalled, "The problem wasn't the regular people; the problem was the agitators, and there were a lot of them. My partner next to me, he caught a house brick in the chest. They had to take him to the hospital."

Marilyn Katz was the 23-year-old head of security for Students for a Democratic Society. "The notion that anybody came to the party with the idea of a big fight is wrong," she said. "I understand that they felt that one, they should keep control of their city, and that the Democratic Party and the mayor were saying, 'We're counting on you to keep things in order.' There was no excuse for beating us."

Simon asked Katz, "Did you ever see anyone throw anything at police officers?"

"Yes. Yes, I did," she replied. "And if I had had something, I would have thrown it back, too, because we had done nothing."

The violence in Grant Park was seen all over the world, and at the convention, where anti-war delegated erupted. Abe Ribicoff, speaking at the podium, said, "With George McGovern as President of the United States, we wouldn't have to have Gestapo tactics in the streets of Chicago."

Despite the uproar, Humphrey won the Democratic nomination by more than a thousand votes.

But, Schieffer said, "Once all these riots had broken out, and all this trouble had happened in Chicago, the nomination wasn't worth the paper it was written on."

Richard Nixon ran on a "law and order" platform, and won the presidency in a close election. And at the end of 1968, a special commission called what happened that night on the streets of Chicago a "police riot."

Bill Jaconetti – who would be decorated in 1979 for taking two bullets to free 13 hostages – said, "Well, it wasn't the police riot."

And Marilyn Katz, now a well-connected public relations executive, agrees: "I think that puts too much blame on the individual cops. I think that Daley made a mistake. He really wanted to maintain control of his city and demonstrate it."

Richard J. Daley would be re-elected twice after 1968. But his actions at the Democratic convention he brought home that year would stain his image in history, and the party and city he loved.

Simon asked Bill Daley, "Did your father ever have second thoughts about his actions or anything he should've done differently?"

"Probably regretted getting the convention!" he laughed. "He was defensive around the police action because he thought that they were provoked, challenged. Yeah, he wished it didn't happen. But he was not somebody to go back and, you know, anguish over decisions made.

"And in those times with the energy, things were black-and-white. There was good, there was bad; cops are bad, you know, demonstrators are good. But life's more gray."