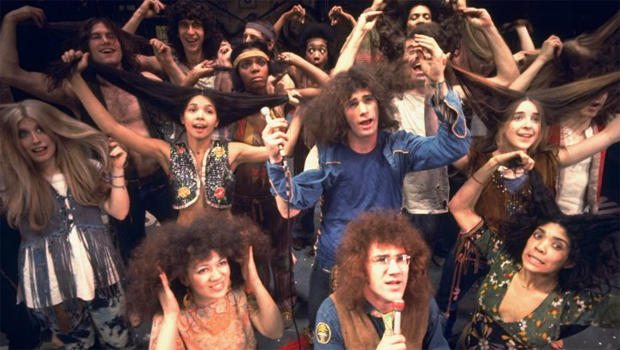 From time to time over the course of 2018, we're looking back at that year of years, 1968.  This morning, Susan Spencer takes note of how 1968 changed popular culture, beginning with the Broadway theater:

Fifty years ago, "Hair" took root – and Broadway had never seen anything like it. "I think the audiences were shocked," said Diane Paulus. "They were using profanity in the score. And of course, they got naked!"

Paulus says the show "absolutely changed Broadway. The idea that you could have rock music in a Broadway show!"

A Tony Award-winning Broadway director, Paulus fell in love with the rock musical (music by Galt MacDermot, lyrics and book by Gerome Ragni and James Rado) when she was just eight years old, admittedly young for its themes of protest, drugs and sex.

To watch the original Broadway cast of "Hair" perform on the 1969 Tony Awards broadcast, click on the video player below:

"My earliest memory was the album, singing 'Sodomy,' not understanding anything!" she laughed. "I mean, I knew that song by heart! And then the first time I got to know the show was seeing the film that Milos Forman made in the '70s."

"The lyrics to some of these songs are hilarious," Spencer said:

"What does that mean?" she asked.

"All different kinds of experiences of hair!" replied Paulus.

Those wacky lyrics – and the story itself – reflect the times: Young people facing the draft, deciding whether to protest or serve in Vietnam.

Paulus said, "What was so radical about 'Hair' is, it was reflecting exactly what was happening in real time in the street, to the point that cast members in the show would get draft notices delivered to the stage door."

Paulus has her treasured album cover framed. So no surprise, she says it was a "dream come true" when she directed the 2009 Broadway revival of "Hair."

"I wanted people who understood what it meant to be alive in '68 as a young person," she said. "And of course, I should say we were always looking for actors with extraordinary hair!"

To watch the cast of the 2009 Broadway revival of "Hair" perform "Aquarius" and "Let the Sun Shine In" on "Late Show with David Letterman," click on the video player below.