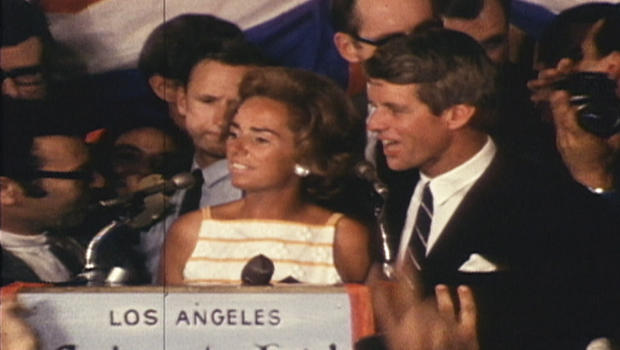 The events of that one-of-a-kind year 1968 cast a shadow to this day, not least the assassination of Robert F. Kennedy 50 years ago this week. Our Cover Story is reported by Jim Axelrod:

When Robert F. Kennedy stepped from the stage at the Ambassador Hotel in Los Angeles, his walk through the kitchen moments later would become the violent bookend to one of the most turbulent stretches in American history.

Just three months earlier, Kennedy had announced he would take on the sitting president from his own party. "I do not lightly dismiss the dangers and the difficulty of challenging an incumbent president, but these are not ordinary times," he said.

A short while later, with anti-Viet Nam War sentiment spiking, President Lyndon Johnson pulled out of the race. And just four days after that, Kennedy announced to a shocked crowd in Indianapolis that Dr. Martin Luther King Jr. had been shot and killed in Memphis.

Finally, a few minutes after midnight of June 5, 1968, America faced the murder of yet another Kennedy.

Journalist Pete Hamill, who helped subdue Robert Kennedy's assassin, says the wound America suffered that night has yet to heal.

"It's a story of what might have been," he said. "Not about what happened, but what we lost when it happened."

"What did we lose?" asked Axelrod.

"I want the Democratic Party and the United States of America to stand for hope instead of despair."

Kathleen Kennedy Townsend, the oldest of Robert and Ethel Kennedy's 11 children, says her father gave people hope and lifted them up. She says people found that hope in the questions her father was asking: "We have this great wealth, $800 billion a year. We have all of this military power. And yet, how do we use it? What do we do with it?"

"'How do we make moral choices? How do we help our fellow human being?'" Townsend said. "That is the most meaningful thing you can do."

And it was their faith in the answers he offered that helped him build a coalition that's implausible, if not impossible, to imagine today. "He could speak to white working class men and women because they trusted him that he would fight for them, and he also fought for African-Americans," said Townsend. "If you talked to those who met him, you never sensed that he felt he was better than you. He was with you."

The story of Bobby Kennedy, as his loyalists tell it, is a tale of transformation, from hard-charging law-and-order young attorney hunting Communists on Joe McCarthy's staff in the early 1950s, to social justice warrior by the late sixties.

"He was not just a speaker; he would listen to what people were saying, after the great wound of his brother's assassination," said Hamill. "And he understood, I think, that part of him, although he came from the Irish, part of him was Jewish, part of him is Latino.

"For somebody that's famous as he was, he was living his life, not performing it."

A young senator from New York, he used his bold-faced name, fame and political capital to focus on the forgotten … as when, in April 1967, he visited Mississippi to see the rural side of poverty.

When asked how his trip to the Delta came about, Marian Wright Edelman laughed, "By a miracle." Edelman, a young lawyer working with the poor in Mississippi, was right there with Kennedy, and knew his power with the people he was meeting.

"In most shacks, you would see Robert Kennedy and John Kennedy's pictures," she said.

But Edelman says she was not prepared to like him, because – as attorney general – Kennedy had authorized the wiretapping of Martin Luther King, Jr. in 1963.

Still, there Kennedy was, in Mississippi, putting poverty on the map.

"He was just shocked" by what he saw, said Peter Edelman, a Kennedy aide, who would meet Marian on that trip, and later marry her. "You see children with swelling bellies, with running sores, and he said to me, 'I've been in third- and fourth-world countries and I haven't seen anything as terrible as this.'"

Marian said, "I watched him interact with children. And the thing that I grew to like most about him and to see that he was really absorbing it, was his touch. He would rub a child's cheek, and that meant a lot me."

A little more than a year after that trip, Bobby Kennedy was gone.

Pete Hamill is still haunted.  So taken by RFK's potential, he had written him, begging him to get into the race, thinking Bobby Kennedy uniquely positioned to address the divisions in America:

"Dear Bob, I had wanted to write you a long letter… The fight that you might make would be the fight of honor," he wrote. "If you won, the country might be saved."

Kennedy would campaign with that letter in his jacket pocket.

Reading that letter now, Hamill says, "I regret the part I had in making, if I did, in making him make the choice [to run]. Because of a young dope with a pistol."

"You do think about that part of it?" asked Axelrod.

"Did he ever express his own fear that he, too, might be assassinated?"

"You think it was in there, he just didn't talk about it?"

"I think it was in there," Hamill replied. "Because when I saw him that night, there was a kind of look on his face that was, I knew this was gonna happen."

Decades later, "how" Bobby Kennedy died is still raising questions.  Last week, two of his children called for a new investigation into whether there was a second gunman.

Fifty years ago Robert Kennedy was eulogized by his brother, Ted, who quoted a theme of RFK's campaign: "Some men see things as they are and say, Why? I dream things that never were and say, Why not?"

A train carried his body from New York City to the nation's capital. Crowds lined the train tracks, and waved, and cried.

"That train ride was supposed to be three hours, and instead it turned almost seven hours," said Townsend. "Two million people came out.  African Americans in Baltimore singing the 'Battle Hymn of the Republic.'  Nobody organized this; it was spontaneous.

"What did he have that touched so many people? His love, his courage, and his ability to relate."

There are plenty of people in this country who find the story of the Kennedys an exercise in grand-scale mythmaking.

But this Sunday morning, there are many others marking, and mourning, the night half a century ago when what may have been the brightest spark of political hope in their lifetimes was extinguished.

Kathleen Kennedy Townsend said. "It's hard to know exactly what heals. There's pain that lasts for 50 years. It's enormous sadness, enormous sense of loss. I'm not a believer that time heals all wounds, at all; I think the wounds stay for a long time."