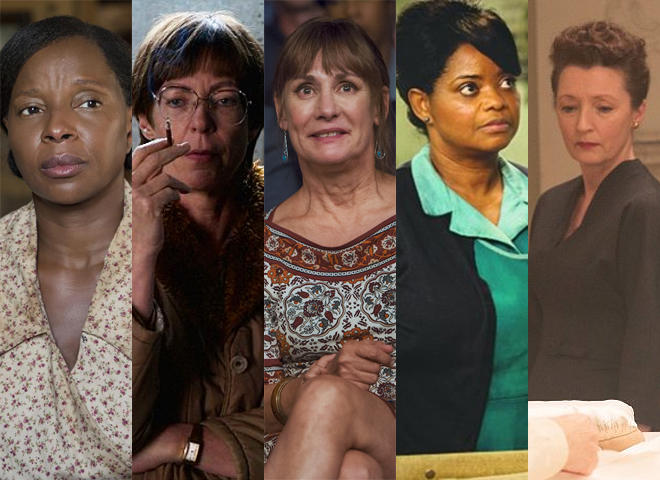 Check out clips below of the five nominees for this year's Academy Award for Best Supporting Actress.

The singer-songwriter who is up for an Oscar for Best Original Song (for "Mighty River") is also nominated for her restrained and touching performance as Florence Jackson, the matriarch of a Southern sharecropping family who sends her son off to war. In a film that veers unnecessarily into melodrama at times, Blige's Florence maintains a stoic presence that shows her steely will and determination to maintain her family in the face of Jim Crow.

In the clip below, Florence bids her son Ronsel (Jason Mitchell) goodbye. Her seeming distance is actually all the more moving, in what could have been the kind of emotionally overwrought parting that we have seen in films many times before.

In this year's pantheon of mother figures, the nobility of Blige's Florence gives way to the scheming of Alison Janney's LaVona, mother of figure skater Tonya Harding, in the faux documentary "I, Tonya." The chain-smoking LaVona pushes, upbraids, savages and inflicts immeasurable abuse upon her daughter on and off the ice, but she also acts as a fiery, protective mother to ensure Tonya gets the same access to skating lessons as more well-to-do little girls.

And to what end? Certainly not to gain the unceasing love of her child, as indicated in this wonderful scene between Janney and Margot Robbie. Warning: Language is as razor-sharp as Janney's talent.

In what may be the most difficult-to-balance performance of the year, Laurie Metcalf's Marion McPherson in "Lady Bird" presents both the maternal, caring aspects of motherhood and the brutally honest hounding of an exasperated parent who constantly oversteps or erases boundaries. As her husband Larry (Tracy Letts) explains to Lady Bird, "You both have such strong personalities. She doesn't know how to help you and that frustrates her."

An example of Marion's strong personality is this scene, one of several clashes with Lady Bird over the girl's future prospects. Metcalf's gift is to create a character that draws an audience's ire and empathy in equal measure.

Octavia Spencer, "The Shape of Water"

An Oscar-winner for "The Help," and nominated last year for "Hidden Figures," Octavia Spencer is nominated this years for her portrayal of the cleaning woman Zelda, a co-worker and friend of Elisa (Sally Hawkins) at a secretive government facility, in "The Shape of Water."

As Elisa is mute, Zelda does most of the verbal heavy lifting during their shift, with an attitude that indicates she will, later in the story, prove a powerful ally once Elisa decides to break rules and help a captured sea creature escape.

In "Phantom Thread," British actress Lesley Manville (a regular in Mike Leigh's films) plays Cyril, sister of Daniel Day-Lewis' Reynolds Woodcock. In addition to keeping the business end of things humming in Woodcock's fashion house, she also serves as a protective screen for her temperamental and OCD brother, especially when it comes to the models whose hearts he tends to break.

But she is no pushover. In this delicious scene between Manville and Day-Lewis, the sister who presents as a considerate sibling shows no hesitation to pronounce who, as it were, wears the pants in the family.