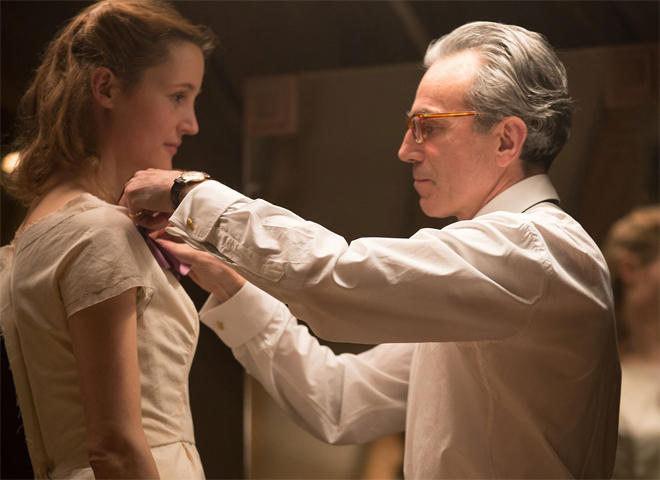 Listen to excerpts from the five nominees up for this year's Academy Award for Best Original Score.

Christopher Nolan's story about the World War II evacuation of troops from certain death on the shores of Dunkirk, France, is chillingly taut in execution. Told from the points of view of service members and rescuers on land, sea and air, the film plays with an expansive camera frame and with sound to make the viewer feel claustrophobic -- trapped, hemmed in, and desperate.

As he has with Nolan's films in the past, Hans Zimmer supplies a riveting tension. Operating with a string quartet, his rather avant-garde approach to an epic war film rejects the possibility of heroic or romantic music. Instead, tied to the rhythms of a ticking clock, the music reinforces the peril of its characters, and extends the suspense through the innovative use of "Shepard Tones" -- an unsettling means to musically imply ascending chords that go on forever.

Play Excerpt: "The Mole" from "Dunkirk"

Zimmer, whose Jewish mother escaped from the Nazis in 1939, didn't have to go far to get at the emotional core of his score. "I wrote by going to the beach, picking up the sand, seeing the misery on that beach," he told CBS News' Mark Strassmann in August 2017. "You have to get a movie under your fingers. It's as simple as that."

Play Excerpt: "We Need Our Army Back" from "Dunkirk"

Composer Johnny Greenwood, guitarist for the group Radiohead, had previously contributed a stunning score for director Paul Thomas Anderson's 2007 film 'There Will Be Blood." The music was disqualified for an Oscar (Greenwood had debuted a chunk of it, "Popcorn Superhet Receiver," prior to the film's production), but thankfully Greenwood has been recognized for his sumptuous work here.

The film, set in Britain in the 1950s, creates the world of fashion designer Reynolds Woodcock through strings and piano (at one point using 60 string players), with musical inspirations ranging from Bach and Vivaldi to 20th century masters like Messiaen and Penderecki, as well as jazz and pop figures like Bill Evans and Nelson Riddle.

The track "Sandalwood" is reminiscent of the work of John Adams.

Greenwood was freed from composing directly to picture; some pieces were composed prior to shooting, some were character sketches that were extended or shortened once the film was edited.

"The Shape of Water' by Alexandre Desplat

A nine-time Oscar nominee (and an Academy Award-winner for 2014's "The Grand Budapest Hotel"), Alexandre Desplat created a lushly romantic score for Guillermo del Toro's fantasy of a mute woman who falls in love with a veritable Creature from the Black Lagoon.

Though the film has the DNA of a sci-fi/horror film, the music hews closely to romantic fantasy, with a dream-like quality for its opening underwater scene.

The characters' relationship is further depicted with orchestrations alternately quirky and sweeping. An accordion pops up from time to time (the creature hails from a South American river), while other instruments are muted -- as how they might sound underwater.

Play Excerpt: "The Egg" from "The Shape of Water"

Play Excerpt: "Watching Ruth" from "The Shape of Water"

John Williams holds the record for Oscar nominations by a living nominee (51), and five of them have been for "Star Wars" films. (He won for the 1977 original.)

The saga has been composed as a Wagnerian space opera, using leit-motivs for characters and concepts, those themes developing and melding over time as the saga progressed.  For the latest entry, "The Last Jedi," Luke Skywalker has forgone his Jedi Master past and retreated to life as a hermit on Ahch-To Island, where he is found by a young wanna-be apprentice:

Williams' gift for action music is fully on display in the film's opening scene, a spectacular space battle involving a perilous Resistance attack upon the First Order dreadnought.

Williams' character portraits are further developed in this meeting of Finn (introduced in the last film, "The Force Awakens") and Rose, a feisty young woman who brooks no defiance.

Play Excerpt: "Fun With Finn and Rose" from "Star Wars: The Last Jedi"

A veteran of the Coen Brothers since their very first film (and stupefyingly never nominated for any of them), Carter Burwell loves character portraits for which he can craft elegant, simple musical environments.

His orchestrations can be as quirky as the films themselves (his "Raising Arizona" score -- banjo and yodeling -- is a lark). Yet for Martin McDonagh's "Three Billboards Outside Ebbing, Missouri," Burwell keeps to the underlying sadness of the plot (a mother seeking justice for her murdered daughter) while ignoring the antics of some of the characters who seem blithely unaware of their limitations. (We see you, Sam Rockwell.)

Play Excerpt: "A Cough of Blood, A Dark Drive" from "Three Billboards"

The reflective, soft melody and woodwind of "The Deer" is reminiscent of Burwell's score for "Carol," for which he'd earned his first Oscar nomination.