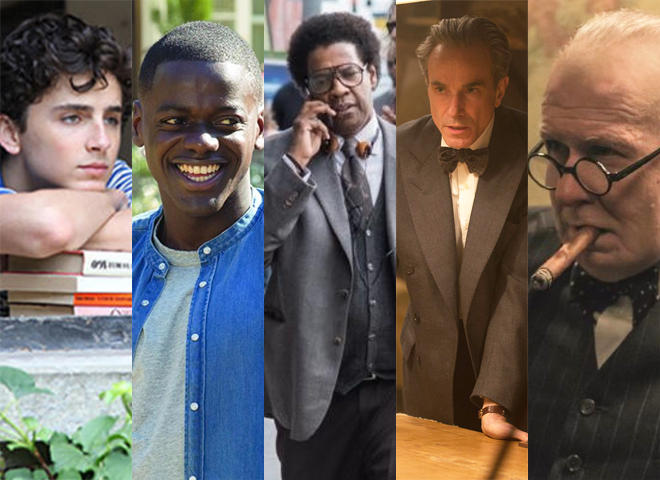 Check out clips below of the five nominees for this year's Academy Award for Best Actor.

Timothée Chalamet, "Call Me by Your Name"

The young star of this emotional coming-of-age film, about a teenager, Elio, who becomes romantically involved with an older man during an idyllic summer vacation in Italy, proved Timothée Chalamet's dexterous ability to express a teenager's awkwardness and corresponding sense of certainty.

In this scene Elio hesitatingly broaches a closer bond with Oliver (Armie Hammer). The words speak as much for what they don't communicate as what they do.

A three-time winner of the Best Actor Oscar (the most by any male actor), Daniel Day-Lewis is again nominated for his mercurial performance as Reynolds Woodcock, a dressmaker for the fashion cognoscenti in 1950s London, in Paul Thomas Anderson's "Phantom Thread."

In this clip we witness Woodcock's artistic inspiration, his elegant fussiness, and his evocation of the male gaze -- a riveting stillness – that is an act of seduction for the young Alma (Vicky Krieps), who becomes his muse, lover and, ultimately, torturer.

Daniel Kaluuya, "Get Out"

Jordan Peele's breakout horror-satire "Get Out," in which an African American visiting his white girlfriend's family discovers that all is not right in upper-middle-class suburbia, is a wrenching emotional ride that deftly juxtaposes comedy, social commentary, terror and blood without ever losing its footing.

A large part of that may be credited to Daniel Kaluuya, a British actor whose previous credits include "Sicario." Kaluuya is the proverbial fish-out-of-water whose POV becomes clouded by the liberal pieties, tinges of racism and downright creepiness that pervades the white-bread community he visits.

In this masterful scene with Catherine Keener (his girlfriend's mother and a hypno-therapist), Kaluuya's childhood memory becomes a trap that plunges him, and the audience, into a place best left to nightmares.

Previously nominated for the 2011 John le Carré thriller "Tinker Tailor Soldier Spy," Gary Oldman has swept the board of acting honors this year, winning the Screen Actors Guild Award, BAFTA, Golden Globe, and most other critics groups' awards for his portrayal of Winston Churchill in "Darkest Hour."

The film depicts Churchill's early days as prime minister, plunging right into the deep end -- after Neville Chamberlain's appeasement to Hitler -- to find a nation with its back to the wall, and facing a cabinet rooting for a negotiated surrender. Needless to say, Churchill will have none of it, but he must maneuver a political quagmire in his underground war rooms, and a king who becomes a wary ally, in order to rescue his Army stranded just 50 miles from the English coast, in France. We know he succeeded (we saw Christopher Nolan's "Dunkirk"), but Oldman's chess-playing among his political rivals still keeps the suspense going. And, as his oratory proves, a rousing speech can do a hell of a lot for morale in wartime.

Denzel Washington earned his eighth acting nomination (he's won twice, for "Glory" and "Training Day") for his portrayal of an idealistic attorney facing professional and personal turmoil that puts his outlook on the legal system to the test.

Will he walk away from his goal of reforming the justice system through dogged determination to take a safer, cushier position? And when he faces a moral challenge, will he step up? These things are easier said than done, and Washington, one of our most gifted actors, shades his performance with doubt, misery, and hope.

Will Smith apologizes for slapping Chris Rock at the Oscars
More