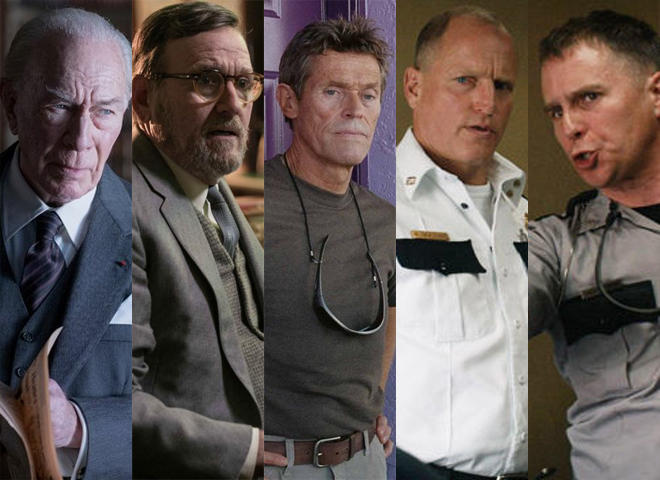 Check out clips below of the five nominees for this year's Academy Award for Best Supporting Actor.

Christopher Plummer, "All the Money in the World"

This has got to be a record: In October 2017 the Kevin Spacey sexual harassment scandal broke wide open, and director Ridley Scott and Sony Pictures went back to the drawing board on their J. Paul Getty kidnapping drama "All the Money in the World," to re-film Spacey's scenes with Christopher Plummer taking over his role. In less than three weeks the actor, nearing 88 years old, crafted an elegant and wily performance, in time to screen the film for the press and keep the original December release date.

If you'd seen clips of Spacey in the trailer released in early fall, you'd agree it was hard to recognize him under his old-age makeup. At least Plummer didn't have to worry about that. But in less than three months, the "Sound of Music" star managed to have a plum role fall into his lap, shoot it, and earn an Oscar nomination.

In this NSFW scene, Sam Rockwell's Officer Dixon stands up to a very determined Mildred Hayes (Frances McDormand) who confronts him over his law enforcement tactics, which are questionable at best and illegal at worst. But Hayes knows exactly how to get under his skin, and Dixon -- in a wonderfully unsettling moment -- loses all semblance of authority.

This is the first Oscar nomination for Rockwell, who won the Golden Globe, BAFTA and Screen Actors Guild Award for his performance. And did we say this scene is NSFW?

As Ebbing Police Chief Willoughby, Woody Harrelson (previously nominated for his performances in "The People vs. Larry Flynt" and "The Messenger") has to juggle many balls in the air, from managing the hot-headed members of his small-town force, to dealing with the mother of a cold case murder victim, and be a loving husband and nurturing father for two little girls who -- because of his cancer prognosis -- he may not be around long enough to see grow up.

It's a rueful and touching performance that speaks to the legacy one wishes to leave behind.

Richard Jenkins, "The Shape of Water"

Character actor Richard Jenkins had a rare lead role in the 2008 film "The Visitor," for which he received a Best Actor Oscar nomination. For "The Shape of Water," he serves as narrator for Guillermo del Toro's romantic fable, and plays the next-door neighbor of Sally Hawkins' mute cleaning woman. An advertising illustrator and gay man both hopeful and wistful, he's willing to fill in the silences of their relationship, and even engage in a little soft shoe.

BTW, this clip, also, is NSFW.  (Film studios seem intent on releasing clips that we can't embed without warnings, or broadcast without scissors.)

Nominated twice before for Best Supporting Actor (for "Platoon" and "Shadow of the Vampire," Willem Dafoe gives an understated but strong performance in "The Florida Project" as Bobby, manager of a motel on the seedy outskirts of Orlando that is home to struggling families. "I'm kind of, in the movie, connective tissue," he told CBS News' Martha Teichner. "I'm always going around putting out fires, because all these people have pretty challenging lives, and there's lots of problems at this budget motel, and I've gotta sort things out."

Dafoe said he was fascinated by the prospect of working with a mix of professional and new performers, children and non-performers, "telling a story that's not usually told, of an underclass, of a world that I didn't really know."