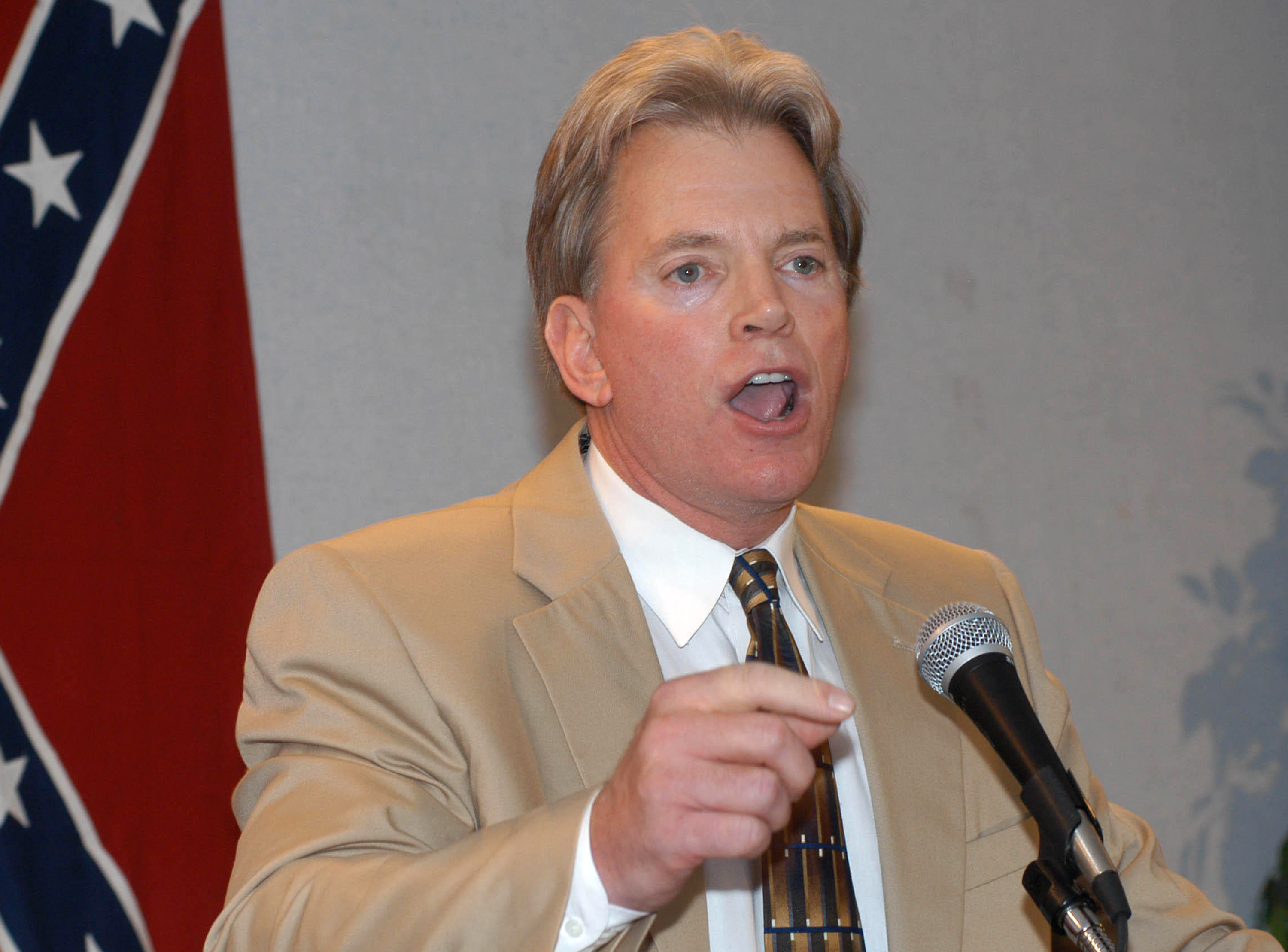 In a stark reminder that anti-Semitism is alive and kicking in the digital realm, neo-Nazis have developed a peculiar symbol -- triple parentheses -- to label and harass Jews online. It may sound like a trivial gesture, but this one symbol speaks volumes about much larger issues: the overlap between Trump supporters and white supremacists, how Twitter polices hate speech, and the vitriol being directed at Jewish reporters who cover politics in America today.

Here's what you need to know

In recent weeks, several highly visible Jewish political reporters have reported a barrage of online harassment, much of which has come from supporters of presumptive Republican presidential nominee Donald Trump. The uptick is hard to measure, but through the sea of tweets one symbol has emerged: triple parentheses placed around their names.

In the white supremacist blogosphere, triple parentheses represent "echoes" -- a nod to the belief that Jewish names "echo" throughout history to punish whites for their sins.

Think of the parentheses as the digital equivalent of the yellow star, the symbol Jews were mandated to wear in Nazi Germany starting in 1939. The yellow star was one of "many psychological tactics aimed at isolating and dehumanizing the Jews of Europe, directly making them different (i.e. inferior) to everyone else," according to the U.S. Holocaust Memorial Center. Those who failed or refused to wear their badges risked punishment, including death. In separating Jews from the rest of the population, the symbolic stars paved the way for Jews to be segregated, ghettoized, deported and eventually murdered at a scale of 6 million.

The Anti-Defamation League (ADL) has noticed the "echoes" symbol being used to attack Jews online and recently added it to its database of hate symbols, which is used by some law enforcement.

"It's on the radar," ADL CEO Jonathan Greenblatt said in an interview with CBS News. He added that it's "the most salient and timely example" of a larger atmosphere of hate that has emerged this presidential campaign season.

The triple parentheses symbol is not easily searchable, since most search engines omit punctuation from results. For instance, a Twitter search for it produces the result "Sorry, you entered an invalid query. Please try your search again." Thus, the slur slips under the radar, a coded language that anti-Semites can use without much fear of being easily identified and reported or having their accounts suspended. In short: anti-Semites have found a loophole in Twitter, and they're using it.

Critics note that, if Twitter specifically monitored the (((echoes))) symbol, it could potentially shut down at least this one manifestation of hate speech. Twitter could also make the term searchable.

In general, the social media platform monitors and shuts down hate speech on a tweet by tweet or account by account basis. Following Twitter's official policies, users "may not promote violence against or directly attack or threaten other people on the basis of race, ethnicity, national origin, sexual orientation, gender, gender identity, religious affiliation, age, disability, or disease." The platform says it will ban accounts "whose primary purpose is inciting harm towards others on the basis of these categories."

However, Twitter has acknowledged in the past that its policies often fall short. "We suck at dealing with abuse," then-CEO Dick Costolo said in an internal memo obtained by The Verge last year.

CBS News reached out to Twitter for comment, but as of this posting the company has not responded.

"There's no magic wand to eradicate cyber hate or cyber incitement," Greenblatt said. His organization has worked closely with Twitter, along with companies like Facebook and Google, to architect standards for identifying hate speech. He agreed that Twitter has "room for improvement."

Some Jews are reclaiming the symbol

Earlier this month, The Atlantic's Jeffrey Goldberg decided to co-opt the parentheses and place them around his own name on Twitter. He did this out of admiration for "what LGBT activists did with the word 'queer' --seize it from haters, and make it their own," Goldberg wrote in The Atlantic.

Goldberg, a prolific voice on Jewish-American political identity, is a frequent target of online bigotry and has come to conclude that Twitter "has an enormous problem with anti-Semitism," he recently tweeted.

After Goldberg's move, other Jewish voices -- including former New York Congressman Anthony Weiner -- followed suit and added the symbol to their Twitter handles. For #jewishtwitter, the move has two functions: 1) reclaim a hateful symbol in empowering, unifying terms; and 2) expose said symbol to the world, since most non-Jews would never see it in their own online experiences. In short, it's a way to pull bigotry from Twitter's backrooms (i.e. direct messages and notifications page) to center stage (i.e. one's profile).

At the same time, some Jews have expressed discomfort at the optics of their names cloaked in Neo-Nazi symbolism, regardless of the subversive intent. On Sunday, political reporter Julia Ioffe, who filed a police report after receiving threatening messages from Trump supporters for her coverage of Melania Trump, shared her concerns:

Others -- like David Simon, writer and creator of the HBO series "The Wire" -- expressed their solidarity while opting not to change their Twitter handles:

Several non-Jewish allies have added parentheses to their own Twitter handles, including president of the Center for American Progress Neera Tanden and NAACP CEO Cornell Brooks.

For the ADL's Greenblatt, this show of solidarity among non-Jews is particular moving. Greenblatt drew a parallel between these non-Jews and allies like King Christian X of Denmark during the Holocaust. After Germany mandated that its satellite states and western occupied territories force all Jews to wear identifying badges, Denmark's king is said to have threatened to wear a badge himself in protest. Ultimately, Denmark was the only place in which Germany could not enforce its mandate.

"This is similar," Greenblatt said. "It's really nice."

It's part of a bigger problem

The parentheses symbol is a small glimpse into the vast, muddy waters of anti-Semitism both on social media and in the current, hostile political climate.

Last week, Mic.com reported on the existence of a Google Chrome extension that, once installed, alters users' browsing experience so that Jewish and Jewish-sounding names are given the triple parentheses "echoes" symbol -- i.e. "(((Hershenfeld)))" -- on all the websites they visit. The plugin was uploaded by the Google Chrome user "altrightmedia," a nod to the alt-right, a loosely organized white supremacist movement that's most active on the internet.

According to Mic, which saw the plugin before it was taken down from the Google Chrome store for violating Google's hate policies, the plugin used a frequently updated list of Jewish and Jewish-sounding names generated by its users -- meaning, it was a concerted effort to keep track of Jews in the internet age.

Politically, this past week was of an uncomfortable reminder of the extent to which the worlds of white supremacy, anti-Semitism, and Trumpism sometimes overlap with each other.

On Tuesday, former Ku Klux Klan leader David Duke told radio show listeners that "Jewish tribal nature" is to blame for the media's harsh treatment of Trump and compared Jews to "a pack of wild dogs." The white supremacist is a vocal supporter of Trump, who after initial mixed messages in interviews has explicitly distanced himself from Duke, saying "hate groups are not for me."

In the 2016 campaign, a number of journalists -- from Ioffe, Goldberg and Weisman to Jake Tapper of CNN -- have reported receiving anti-Semitic messages and threats on social media. Much of that has come from self-identified Donald J. Trump supporters, as Weisman said of his own experiences in The New York Times.

Trump has not made anti-Semitic remarks himself, and in fact has noted that his son-in-law, daughter Ivanka, and grandchildren are Jewish.

"A very large portion of these accounts associate themselves with Trump in some way, though it should be pointed out -- I find it hard to believe I'm writing this sentence -- that Donald Trump himself has expressed absolutely no interest in opening concentration camps for Jews, should he win the presidency," Jeffrey Goldberg wrote in The Atlantic. "The white nationalist far-right has decided, though, that Trump will advance its interests."

Earlier this month, the Anti-Defamation League announced a task force to examine recent spikes in hate-filled harassment, with a specific focus on harassment of Jewish reporters this campaign season. The aim of the task force is to examine the size and scope of the harassment, on the left as well as the right, and ultimately propose broad solutions to stymie hate speech on social media.

The group met for the first time on Wednesday. According to Greenblatt, a solid chunk of that meeting was given over to participating journalists to share their personal experiences being targeted by hate speech both online and offline.

"It's worse than I thought," Greenblatt said.