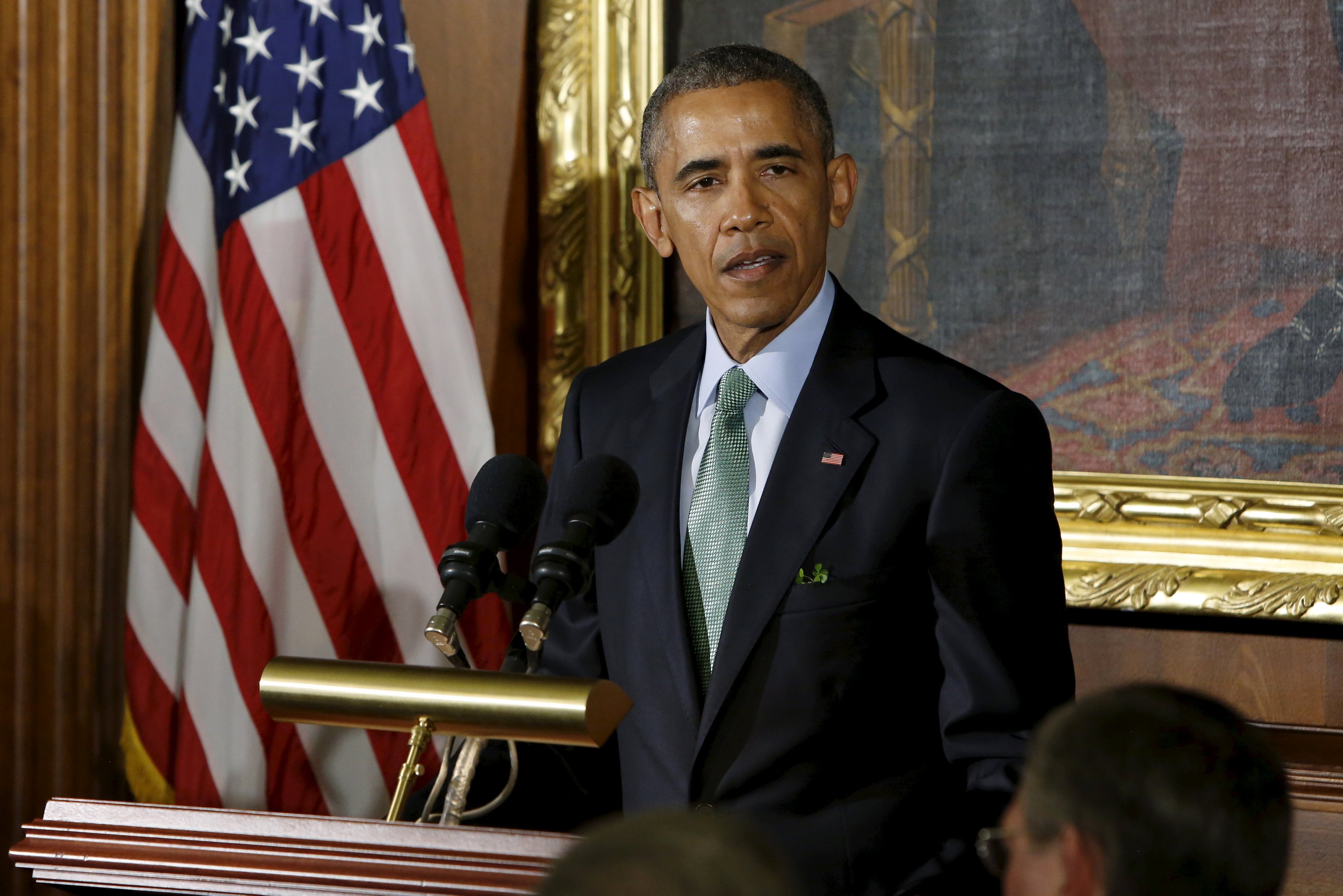 In a clear reference to the violence and chaos surrounding GOP front-runner Donald Trump's campaign recently, President Obama on Tuesday blasted the "vicious atmosphere in our politics" at a luncheon on Capitol Hill and called for lawmakers to help change the tone of the 2016 race.

"I know that I'm not the only one in this room who may be more than a little dismayed about what's happening on the campaign trail lately," he told a room of lawmakers at the Friends of Ireland lunch, hosted by House Speaker Paul Ryan. "We have heard vulgar and divisive rhetoric aimed at women and minorities, at Americans who don't look like us or pray like us, or vote like we do."

"We've seen misguided attempts to shut down that speech. However offensive it may be--we live in a country where free speech is one of the most important rights that we hold," Mr. Obama continued. "In response to those attempts, we've seen actual violence and we've heard silence from too many of our leaders."

The president, who did not mention Trump by name but whose intent was clear, cautioned against accepting the current state of the political world as the "new normal," noting that it helps "undermine our democracy and our society and even our economy."

"I suspect that all of us can recall some intemperate words that we regret. Certainly I can," he said. "And while some may be more to blame than others for the current climate, all of us are responsible for reversing it. For it is a cycle that is not an accurate reflection of America. And it has to stop."

Mr. Obama's comments come as Republicans scramble to figure out how to respond to the increased violence at Trump rallies and events across the country, a situation which reached new levels last weekend. Ryan, asked about the issue in a local radio interview Monday, said the violence is "very concerning" and candidates should "take responsibility for the environment at their rallies."

"When we leave this lunch I think we have a choice," Mr. Obama said. "We can condone this race to the bottom or accept it as the way things are and sink further--or we can roundly reject this kind of behavior, whether we see it in the other party or more importantly, when we see it in our own party, and set a better example for our children and the rest of the country to follow."

Mr. Obama addressed himself directly to Ryan toward the end of his remarks, saying he and the Speaker are proof people can disagree on serious policy issues without "turning on one another."

"Speaker Ryan, you and I don't agree on a lot of policy, but I know you are a great father and a great husband and I know you want what's best for America," he said. "...The point is, we can have political debates without turning on one another, we can disagree without assuming that it's motivated by malice."