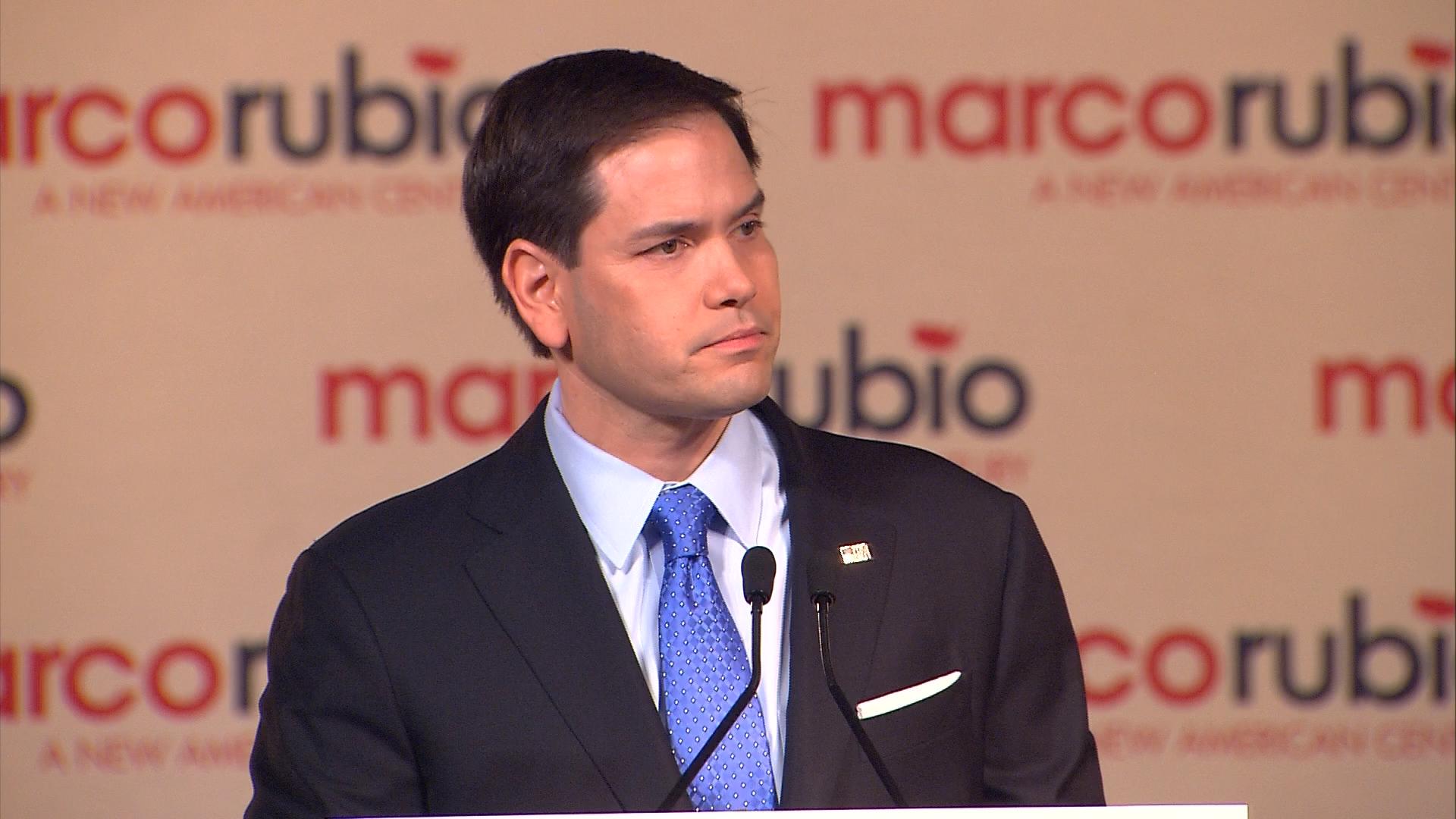 Marco Rubio kicked off his presidential campaign in Miami Monday by telling supporters, "the time has come for our generation to lead the way toward a new American Century."

The Republican senator from Florida became the third politician to enter the race on the Republican side, joining fellow Sens. Ted Cruz of Texas and Rand Paul of Kentucky, who have already made their campaigns official.

But it was the lone Democratic candidate, Secretary of State Hillary Clinton, who declared her own campaign Sunday, that Rubio had in his sights.

"Just yesterday, a leader from yesterday began a campaign for president by promising to take us back to yesterday," Rubio said. "Yesterday is over, and we are never going back. You see, we Americans are proud of our history, but our country has always been about the future. And before us now is the opportunity to author the greatest chapter yet in the amazing story of America."

"But we can't do that by going back to the leaders and ideas of the past. We must change the decisions we are making by changing the people who are making them," Rubio said. "That is why tonight, grounded by the lessons of our history, but inspired by the promise of our future, I announce my candidacy for president of the United States."

The speech touches on themes Rubio has throughout his political career, such as America's history as a country where one's future is not dictated by the circumstances of his or her birth. He will also reflect on how his own family achieved the American Dream, but it has become harder today because of leaders who "put us at a disadvantage by taxing and borrowing and regulating like it was 1999."

But Rubio promises he can turn that all around.

"In many countries, the highest office in the land is reserved for the rich and powerful," he said. "But I live in an exceptional country where even the son of a bartender and a maid can have the same dreams and the same future as those who come from power and privilege."

Earlier today, Rubio told donors he is running for president.

The venue for Rubio's rally also sends a message. It was held at Miami's Freedom Tower, which was once the building where the U.S. processed Cuban refugees fleeing Fidel Castro's violent revolution in the late 1950s.

A Rubio aide told CBS News' Nancy Cordes that 3,512 people from every state but Vermont requested tickets to the event before registration closed on Friday. Since the venue holds just 1,000 people, organizers created an overflow room across the street.

"At every opportunity, Rubio has revealed his true colors - taking outdated positions that match up with the Republican base instead of doing what's best for his constituents and the country," Wasserman Schultz said. "Rubio says he's a new type of Republican, but the only things he's ever championed are the same failed policies the public has already rejected, and the only cause he's ever advanced is his own."

One figure who could loom large over Rubio's campaign but is still, at this, point, only a presumptive candidate, is former Florida Gov. Jeb Bush. The conventional wisdom was that Rubio would not challenge Bush, a fellow Floridian who is 19 years his senior and has served as a mentor to Rubio. But Rubio, 43, appears to have sensed an opening for a younger voice in the crowded GOP field (he will likely be the youngest candidate on the Republican side unless Louisiana Gov. Bobby Jindal throws his hat in the ring). Another consideration -- if a Republican were to win the White House, Rubio could have faced an eight-year wait before he'd have another chance to run. And, should Bush be the nominee, it's unlikely he would be selected as the running mate since they hail from the same state.

Rubio alludes to the coming competition between himself and Bush in his speech, saying, "I've heard some suggest that I should step aside and wait my turn. But I cannot. Because I believe our very identity as an exceptional nation is at stake, and I can make a difference as president."

Rubio burst onto the national scene in 2010 by former Florida Gov. Charlie Crist, a Republican-turned-Democrat, twice to capture a seat in the Senate. Young, conservative, and with a compelling children-of-immigrants story, Rubio captured the imagination of both the GOP and the national media (a 2013 Time magazine cover declared him "The Republican savior").

Prior to his Senate career, he served as a member of the Florida House of Representatives, eventually rising through the ranks to become the first Cuban Florida House Speaker in history.

Rubio has a compelling background story, too. His father was a bartender and his mother a hotel maid, cashier and retail clerk. But Rubio's accounts of his past have caused him some trouble: Rubio's senate biography used to say that his parents "came to America following Fidel Castro's takeover" until a Washington Post reporter revealed in 2011 that his parents arrived in the U.S. before Castro's takeover. Rubio said his account was based on "the oral history" of his family.

Still, the episode has not dimmed his star among the GOP. He transitions smoothly between English and Spanish in press conferences and speeches, and his heritage might have helped to put him in contention as a potential vice presidential candidate for Mitt Romney in 2012.

Since coming to the Senate, Rubio has devoted himself to foreign policy issues and has positioned himself to challenge both Obama and Clinton on the administration's record abroad. He serves on both the Senate Foreign Relations and Intelligence Committees. In particular, he is one of the leading voices opposing Mr. Obama's plan to normalize relations with Cuba, arguing that doing so will not create more freedom for the Cuban people.

Rubio is one of the most hawkish voices in the Senate on national security, and he likes to see himself as leader that shows his colleagues the way. In September, he suggested that other Republicans are following his lead when it comes to stepping up the fight against the Islamic State of Iraq and Syria. He also last year criticized the Obama administration for not doing enough to deter Russia from interfering in Ukraine.

In his announcement speech, Rubio charged that the president has endangered the U.S. by making "dangerous concessions to Iran," showing "hostility to Israel," "hollowing out" the military, "being passive in the face of Chinese and Russian aggression," and showing a "near total disregard for the erosion of democracy and human rights around the world."

Rubio still faces skeptics within the GOP base over his record on immigration. He co-authored the immigration bill that passed the Senate in 2013 that would have created a pathway to citizenship for some undocumented immigrants. But amid a backlash to the bill from many in his own party, especially in the House, which scuttled the bill, Rubio backed away from the comprehensive approach he had once championed and instead supported piecemeal reform that pro-immigration groups believe would result in additional enforcement, while failing to address the more than 11 million immigrants living in the U.S. illegally.

Now, he reflects on his work on the bipartisan bill as instructive.

Rubio told Fox News' Sean Hannity during an interview at the 2015 Conservative Political Action Conference, "What I've learned is you can't have a conversation about that until people believe and know, not just believe but it's proven to them, that future illegal immigration will be controlled and brought under control. That is the single biggest lesson of the last two years."

In his speech he made only a passive reference to immigration, saying it was time to "modernize our immigration laws."