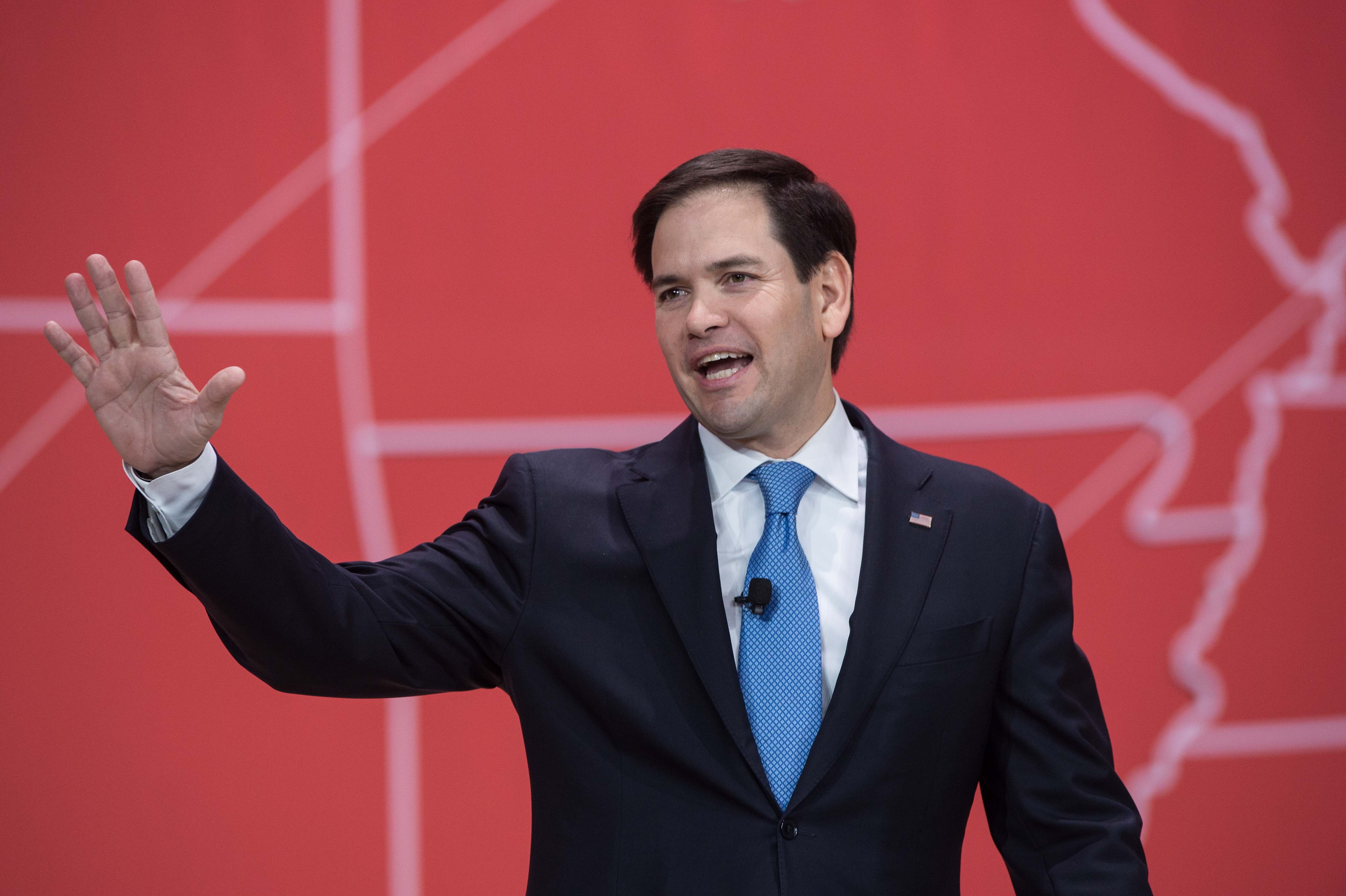 It's a stark contrast: Just one day after Hillary Clinton, who could end up being the oldest Democratic presidential nominee in history, formally jumped into the 2016 race, the man who could be one of the youngest nominees, Marco Rubio, will follow suit.

His 6:00 p.m. announcement could have an overflow crowd - a Rubio aide told CBS News' Nancy Cordes that 3,512 people from every state but Vermont requested tickets to the event before registration closed on Friday. Since the venue in Miami's Freedom Tower holds only 1,000, organizers created an overflow room across the street.

Rubio, a 43-year-old Republican senator from Florida, has been on a fast track to national attention since won his election to U.S. Senate in 2010 (a feat that required beating former Florida Gov. Charlie Crist, a Republican-turned-Democrat, twice). Young, conservative, and with a compelling children-of-immigrants story to boot, Rubio captured the imagination of both the national party and the national media (a 2013 Time magazine cover declared him "The Republican savior").

He'll become the third Republican and the third senator to enter the race, following on his colleagues Ted Cruz of Texas and Rand Paul of Kentucky.

Here are five things to know about Rubio:

1. Jeb Bush was his political mentor: The relationship between Rubio and former Florida Gov. Jeb Bush goes back to 1998 when Rubio was running for West Miami city commissioner and Bush was running for governor. Just two years later, Rubio was elected to the Florida House of Representatives, and as he rose through the ranks of that chamber over the next decade, he had opportunities to work and consult with Bush. Bush gave Rubio with a sword representing conservative values in 2005 when he became the first Cuban-American House speaker in Florida's history.

"It wasn't just a governor-legislator relationship," Nelson Diaz, a lobbyist who worked for Rubio in the legislature at the time, told the New York Times. "It was deeper than that."

In his memoir, "An American Son," Rubio reflected on his decision to jump into the 2010 Senate race in what was seen as a long-shot bid at the time. "Jeb was still immensely popular in the state. If he were to run, no one would challenge him in the primary - certainly not me," Rubio wrote.

But times change. Conventional wisdom suggested that Rubio would sit out the presidential election if Bush ran. For one, he could have to wait another eight years if he didn't jump in this year, if Bush or another Republican were to win the presidency. Plus, there's almost no chance Bush would pick a vice presidential nominee who hailed from the same state - while a Bush-Rubio ticket might be able to get around the twelfth amendment, it seems unlikely Bush would try.

Rubio said on "CBS This Morning" earlier this year, "If I run for president, it won't be against anyone."

"It'll be because I believe I have an agenda that no one else is offering on our side of the aisle, and I believe I can do a better job than they would," he added.

One thing is certain: the two are likely to cross paths regularly on the GOP campaign circuit. They sat next to each other on a flight last Friday from Nashville to Miami after speaking at the National Rifle Association convention.

2. Rubio is one of the GOP's most promising politicians who also happens to be young: Rubio's story as the son of Cuban immigrants is a constant part of his political and professional narrative. His announcement at Freedom Tower is an homage to Cuban immigrant history. The U.S. used the tower when processing Cuban refugees fleeing Fidel Castro's violent revolution in the late 1950s.

Rubio's parents were working-class immigrants; his father was a bartender and his mother a hotel maid, cashier and retail clerk. But the story has gotten him into trouble: His biography on his Senate website used to say that his parents "came to America following Fidel Castro's takeover" until a Washington Post reporter revealed in 2011 that his parents arrived in the U.S. before Castro's takeover. Rubio said his account was based on "the oral history" of his family.

Still, the episode has not dimmed his star among the GOP. He transitions smoothly between English and Spanish in press conferences and speeches, and his heritage might have helped to put him in contention as a potential vice presidential candidate for Mitt Romney in 2012.

3. He has struggled to find his footing on immigration: Rubio was one of a group of eight bipartisan senators who authored the immigration bill that passed the Senate in 2013. It would have created a conditional pathway to citizenship for some immigrants living in the U.S. illegally. But amid a backlash to the bill from both House Republicans and some of the GOP base, Rubio backed away from the comprehensive approach he had once championed and instead expressed support for piecemeal reform that pro-immigration groups believe would result in additional enforcement while failing to address the more than 11 million immigrants living in the U.S. illegally.

Now, he reflects on his work on the bipartisan bill as instructive.

Rubio told Fox News' Sean Hannity during an interview at the 2015 Conservative Political Action Conference, "What I've learned is you can't have a conversation about that until people believe and know, not just believe but it's proven to them, that future illegal immigration will be controlled and brought under control. That is the single biggest lesson of the last two years."

4. He'll likely make foreign policy a central issue of his campaign: "American Dreams," Rubio's policy book, is all about his economic vision for the country. But the senator, who sits on both the Senate Foreign Relations and Intelligence Committees, has become an outspoken critic of President Obama's foreign policy and has more experience than many of his potential competitors for the Republican nomination. In particular, he is one of the leading voices opposing Mr. Obama's plan to normalize relations with Cuba, arguing that doing so will not create more freedom for the Cuban people.

Rubio is one of the most hawkish voices in the Senate on national security, and he likes to see himself as leader that shows his colleagues the way. In September, he suggested that other Republicans are following his lead when it comes to stepping up the fight against ISIS. He also last year criticized the Obama administration for not doing enough to deter Russia from interfering in Ukraine.

5. He speaks the language of younger voters: Rubio is as likely to expand on his favorite rap music as he is about the dangers of Mr. Obama's Cuba policy: In a 2012 interview with GQ, he displayed an in-depth knowledge of the genre's history and praised the "depth" in Eminem's music. He told the magazine his three favorite songs were "Straight Outta Compton" by N.W.A, "Killuminati" by Tupac and Eminem's "Lose Yourself." He has shared his Spotify playlist. Plus, he not only knows what a meme is; he can also be the subject of a meme and then laugh it off on Twitter. Rubio's 2013 State of the Union rebuttal speech got major attention not for what he said, but rather the awkwardly-timed drink of water he took in the middle of the speech. It generated at least 15 different parody Twitter accounts. But Rubio showed he was in on the joke.