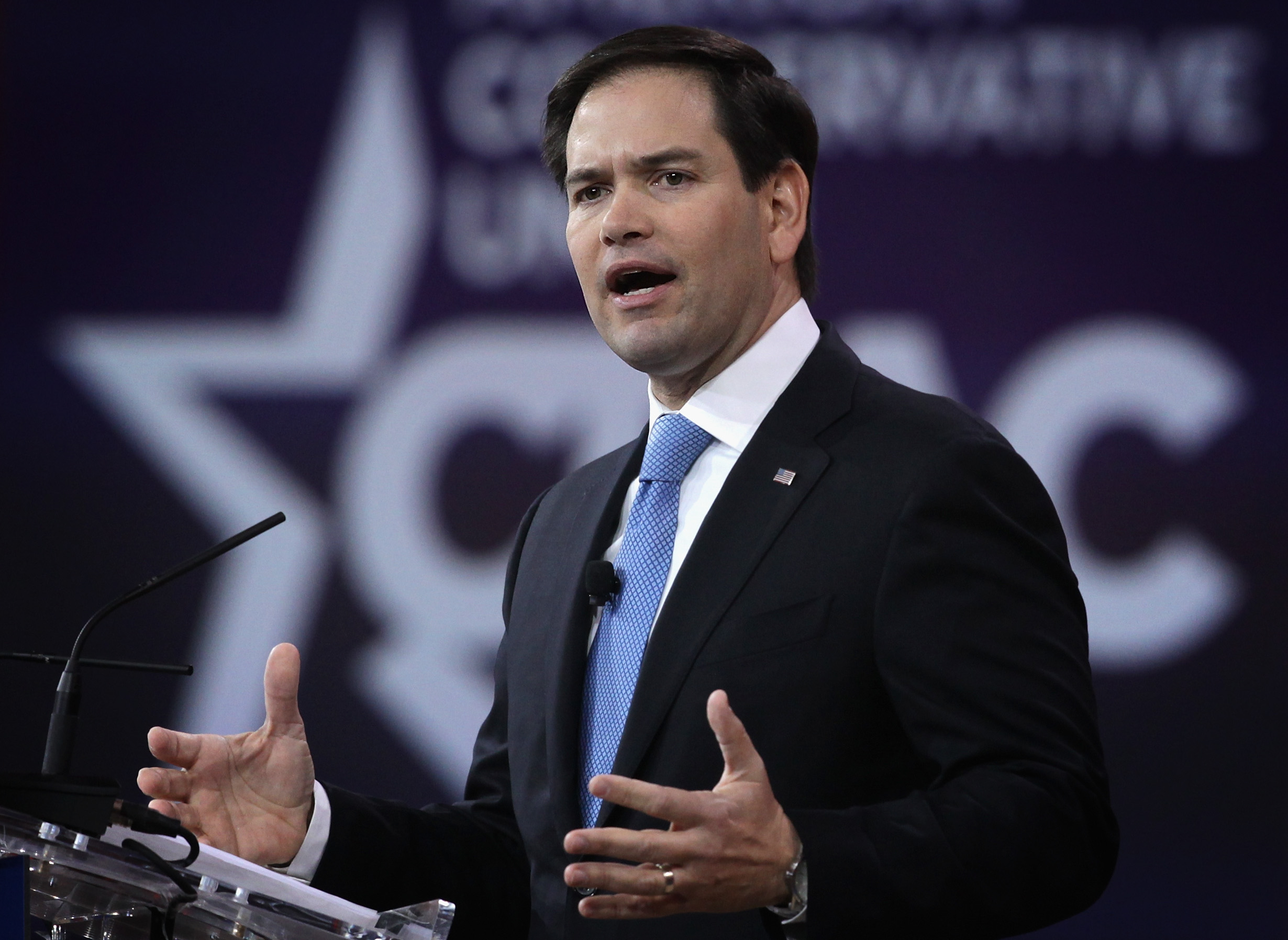 MIAMI -- Sen. Marco Rubio is telling his top donors that he is running for president because he feels "uniquely qualified" to pitch his Republican Party as one that will defend the American Dream.

The first-term Republican from Florida told his biggest backers on a conference call on Monday that he sees the coming presidential campaign as a choice between the past and the future. In a swipe at Democratic rival Hillary Rodham Clinton, Rubio said the former first lady "is a leader from yesterday."

Rubio says he has always felt the United States is about tomorrow.

The Florida senator spoke on a conference call with donors before a flashy political rally set for Monday night in Miami.

Rubio has long been assembling his political team, including donors who helped previous presidential nominees collect tens of millions of dollars. Now, Rubio's campaign kickoff - at the site of what was the first stop for tens of thousands of fleeing Cuban exiles during the 1960s and 1970s - would formalize what has been unfolding for months.

It comes a day after Hillary Rodham Clinton announced her bid for the Democratic nomination and as she is traveling to Iowa on her first trip as a candidate.

That's likely to rob some attention from Rubio's splash into the race. But as his team sees it, the timing also presents an opportunity to cast the presidential contest as one between a fresh face representing a new generation of leadership and a long-familiar figure harking back to the 1990s.

Rubio's event is billed as a "big announcement" to stoke anticipation about his decision whether to run for president or seek re-election to the Senate. For the past week, Rubio has teased supporters on social media, asked them to sign up for an email to get first word of his announcement and offering tickets for $3.05 (Miami's area code is 305). The effort will capture names, addresses and other information about potential voters and campaign donors.

Rubio's team said more than 3,500 people requested tickets to the indoor space, which can only accommodate about 1,000. For the overflow crowd, Rubio's team is building television screens across the street from the main rally site and plans to pass out Rubio signs.

Rubio faces steep challenges to winning the nomination, one of them from his mentor, former Florida Gov. Jeb Bush. Rubio would become the third major GOP contender to declare himself a candidate, after Texas Sen. Ted Cruz and Sen. Rand Paul, in a field that could grow to 20 or more candidates.

A young man in a hurry, Rubio, 43, will no doubt hear rivals tell voters he's not ready for the White House.

A first-generation immigrant whose parents fled Cuba, Rubio could make history as the nation's first Hispanic president (as could Cruz). Rubio frames his pitch to voters as the embodiment of the American dream, a son of a maid and bartender who worked his way through law school and now sits in Congress.

His is an appealing biography for a party that has struggled to connect with minority and younger voters. Those voters have been solidly behind Democrats in recent presidential elections. Rubio's advisers see his candidacy as a way to eat into that Democratic bloc, even if capturing it would be almost impossible.

His political advisers have told party leaders that they should start recruiting a candidate to run for his Senate seat.

Not even two weeks after the 2012 presidential election, Rubio visited Iowa to headline a birthday event for Iowa Gov. Terry Branstad, a kingmaker in Iowa presidential politics.

He's been making inroads with activists after turns at the anti-tax Club for Growth confab and the grassroots Conservative Political Action Conference. And in his day job in the Senate, Rubio has been a leading voice against President Barack Obama's engagement with Cuba and Iran.

On Tuesday, fresh off his 2016 declaration, he is set to return to the Senate to participate in a hearing about Iran.

Rubio also has been lining up a network of donors, who can tap their friends to finance Rubio's campaign, expected to cost about $50 million to get to Iowa's lead-off caucuses. Longtime donor Wayne Berman is leading the money chase for Rubio; Dallas investor George Seay and Goldman Sachs' Joe Wall are lined up, too.

But Rubio faces a hurdle with some conservative activists in Iowa, New Hampshire and South Carolina over his work on a failed bipartisan immigration bill that proposed a long and difficult pathway to citizenship for those who were in the country illegally. The measure cleared the Senate but collapsed in the House in the face of conservative suspicion.

Rubio has since shifted how he is approaching the thorny subject, saying his bill does not have the support to become law and the first focus should be on border security, a standard GOP position. Rubio ultimately wants to create a process that leads to legal status and, then, citizenship.