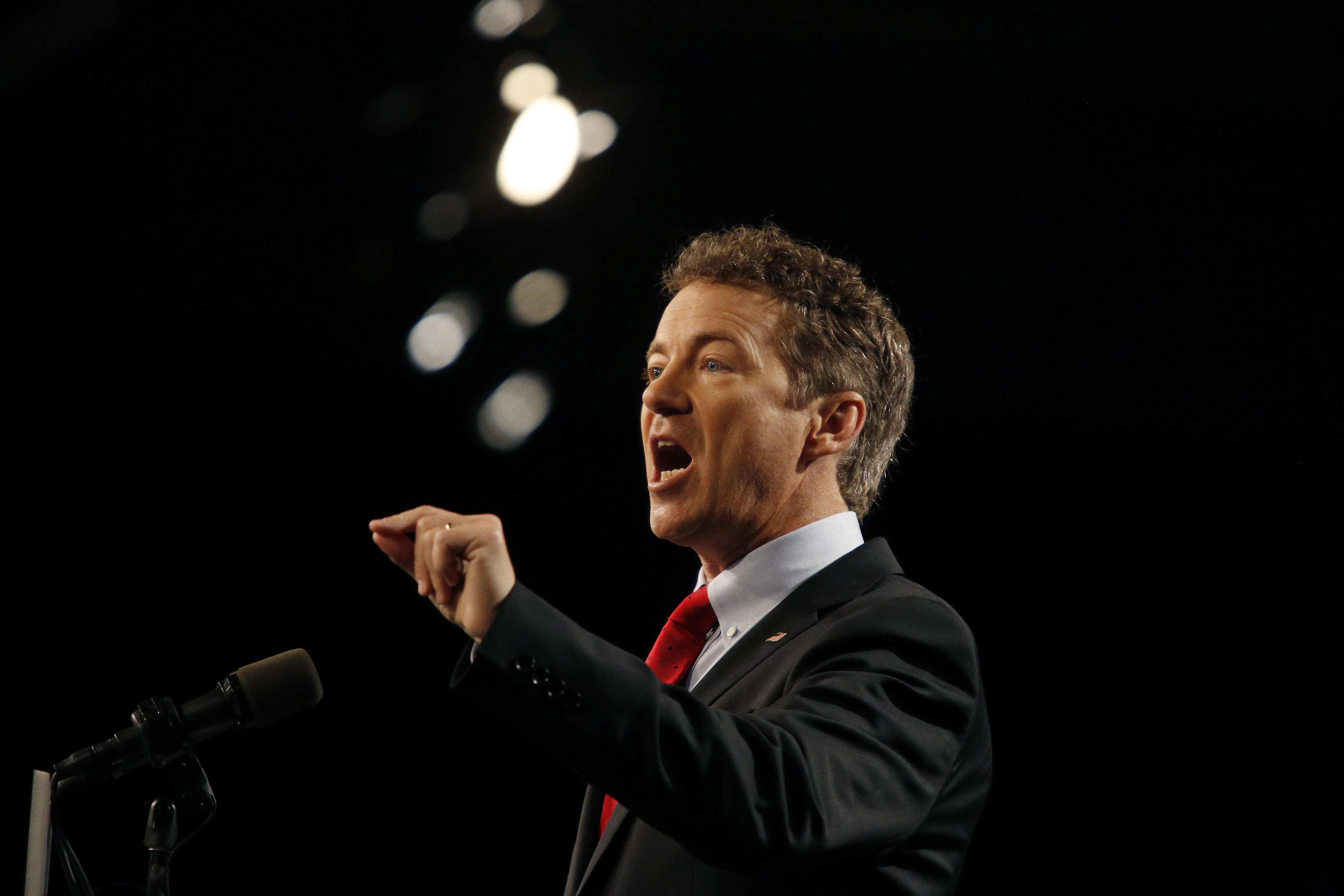 "Today I announce with God's help, with the help of liberty lovers everywhere, that I am putting myself forward as a candidate for the president of the United States of America," Paul said.

The Kentucky senator's announcement speech in Louisville Tuesday touched on several topics that will frame his campaign, including criticism of special interests and career politicians, the surveillance state, a call for a balanced budget amendment, and closing the income gap.

"We cannot and must not give up on our message or dilute our principles," Paul said. "If we nominate a candidate who is simply Democrat-light, what's the point? Why bother? We need to boldly proclaim our vision for America."

Paul converted his website into a campaign website, randpaul.com, earlier Tuesday. And his political action committee sent a long email imploring supporters to contribute anywhere from $10 to $500 for a "Stand With Rand Money Bomb." Paul has used this fundraising technique in the past to collect small-dollar donations online from grassroots supporters.

"The media tells us -- if our Republican Party has any hope of defeating Hillary Clinton -- you and I should choose a nominee with a track record full of sellouts, compromises and Big Government betrayals. So even though I'm at or near the top of every state poll for the nomination, they continue to try and dismiss my message of liberty and limited government!" the appeal reads.

According to CBS News' latest poll, 39 percent of Republicans say they would consider voting for Paul for the GOP nomination, up nine points since February. About a quarter - 23 percent - would not consider backing him, and third don't know enough to say.

The Louisville event highlighted one of Paul's unique characteristics: He's the most vocal Republican candidate to speak about the importance of minority outreach and has traveled to inner cities around the country to pitch ideas for lifting people out of poverty.

Paul has criticized his own party as having a brand that "sucks" and has called a failure to reach out to black voters the GOP's "biggest mistake" of the last several decades. He has advocated for issues close to the black community, like expanding voting rights and reforming drug sentencing laws. He has embraced opportunities to reach out to minority communities, seeking out opportunities to speak at places like the historically black Howard University in Washington, D.C.

"Those of us who have enjoyed the American dream must break down the wall that separates us from the other America," he said Tuesday.

His speech recalled trips to Detroit, Appalachia and Chicago, which revealed what Paul called "an undercurrent of unease."

"I want all our children to have the same opportunities that I had. We need to stop limiting kids in poor neighborhoods to failing public schools and offer school choice, not just for the privileged, but for everyone," he said. "It won't happen, though, unless we realize that we can't borrow our way to prosperity."

A diverse slate of speakers introduced Paul, including former Rep. J.C. Watts, a rare black Republican to serve in Congress, and Louisville-area African American pastor Jerry Stephenson, who said he was a Democrat until 2012. State Sen. Ralph Alvarado, who is Hispanic, spoke at the event, as well as college student Lauren Bosler from the University of Kentucky.

Paul's candidacy already has some detractors. A group called the Foundation for a Secure & Prosperous America announced Tuesday morning a $7 million ad campaign accusing Paul of endangering the U.S. by supporting the framework nuclear deal with Iran being negotiated by the Obama administration.

"The Senate is considering tough new sanctions on Iran," a narrator intones in the ad, which is called "Sanctions." "President Obama says he'll veto them. And Rand Paul is standing with him." The ad will air on Fox News in early-voting states, and Paul will be visiting those states in the coming days as part of his announcement tour.

Paul publicly addressed the Iran deal for the first time Tuesday, saying he would "oppose any deal that does not end Iran's nuclear ambitions and have strong verification measures. And I will insist that the final version be brought before Congress."

In his speech, Paul also departed from the isolationist foreign policy espoused by his father, former Rep. Ron Paul.

"The enemy is Radical Islam and not only will I name the enemy, I will do what ever it takes to defend America from these haters of mankind. We need a national defense robust enough to defend against all attack, modern enough to deter all enemies, and nimble enough to defend our vital interests," Paul said.

And government surveillance, one of the signature positions that helped launch Paul to prominence, also found a place in his announcement.

"I say that your phone records are yours. I say the phone records of law abiding citizens are none of [the government's] damn business," he said in response to revelations about vast surveillance by the National Security Agency.

"The president created this vast dragnet by executive order, and as president, on day one I will immediately end this unconstitutional surveillance," Paul said. "I believe we can have liberty and security and i will not compromise your liberty for a false sense of security. Not now, not ever."