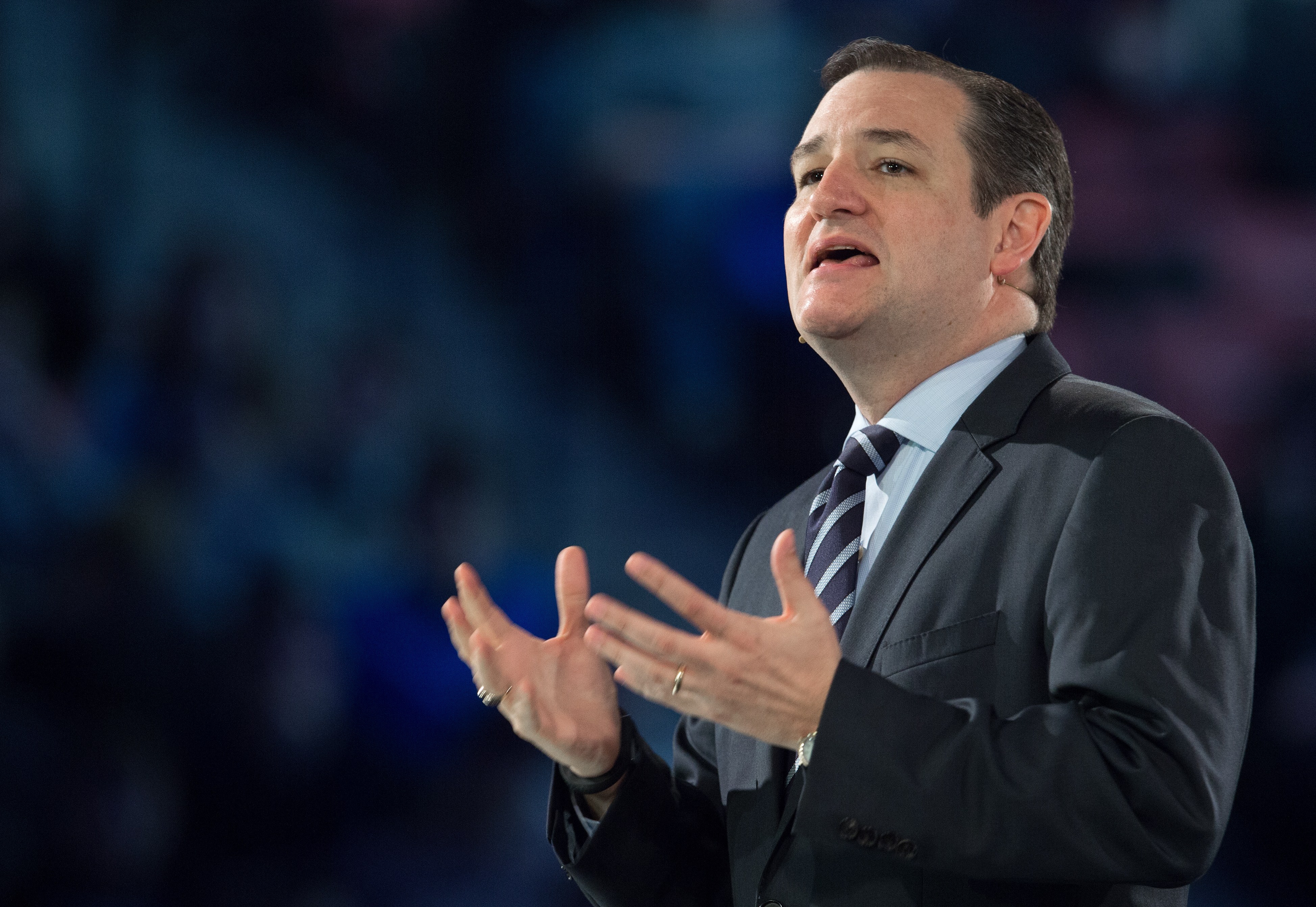 Texas Sen. Ted Cruz began his 2016 presidential bid with an impassioned appeal to the religious right on Monday, exhorting a cheering crowd at the world's largest Christian college to "join a grassroots army across this nation coming together and standing for liberty."

"God's blessing has been on America from the very beginning of this nation, and I believe God isn't done with America yet," he said. "I believe in you. I believe in the power of millions of courageous conservatives rising up to reignite the promise of America, and that is why today, I'm announcing that I'm running for president of the United States."

Cruz said the American dream "has enabled millions of people from all over the world to come to America with nothing and to achieve anything," but he warned that the dream is "slipping away."

He suggested America's political salvation rests, in part, on the political engagement of conservative Christians. "Today, roughly half of born-again Christians aren't voting," he said. "They're staying home. Imagine instead millions of people of faith all across America coming out to the polls and voting our values."

Cruz was joined onstage by his wife Heidi and daughters Caroline, 6, and Catherine, 4. He made his candidacy official early on Sunday morning, and he broke the news himself via Twitter, writing just after midnight, "I'm running for president and I hope to earn your support!"

The move made Cruz, a 44-year-old freshman firebrand who's popular among the conservative grassroots but viewed warily by the GOP establishment, the first major candidate in either party to launch a 2016 presidential bid.

In an announcement video accompanying the tweet, Cruz called for a new round of "courageous conservatives" to rise up and take the country back.

"I believe in America and her people, and I believe we can stand up and restore our promise," he said. "It's going to take a new generation of courageous conservatives to help make America great again, and I'm ready to stand with you to lead the fight."

Cruz has been a popular figure among right-wing activists since he rode a tea party wave to dispatch an establishment-backed Republican in the 2012 Texas Senate primary. Since arriving on Capitol Hill in 2013, he's feuded with Democrats and Republicans alike, frequently frustrating his own leadership with an uncompromising, starkly conservative approach to governance.

Cruz is perhaps best remembered for a 21-hour speech on the Senate floor in 2013 urging lawmakers to defund President Obama's health care law. In September of that year, Cruz successfully urged conservatives in both chambers to defy GOP leadership by refusing to back any government spending bill that funded the law. His intervention was blamed, in part, for the 16-day government shutdown that resulted after the dispute over Obamacare temporarily blocked a spending agreement.

He's taken a similarly defiant tack on issues like gun laws, education, and immigration reform, exhorting his party to stand tall instead of moving to the middle to accommodate their opponents.

Cruz showcased his aggressively conservative agenda on Monday. He reiterated his commitment to repealing "every word" of Obamacare and called for a "flat tax" that allows "every American to fill out his or her taxes on a post card." He called for "abolishing the IRS," and asked his audience to "imagine a president that finally, finally, finally secures the border." He condemned the federal government for waging an "assault" on religious liberty, and stressed the need to "defend the sanctity of life" and "uphold the sacrament of marriage." He called school choice "the civil rights issue of the next generation," and said he'd like to see the "common core" state education standards abolished.

It's an ambitious platform, but Cruz projected confidence that it's all within grasp. "Over and over again when we faced impossible odds, the American people have rose to the challenge," he said. "Compared to that, repealing Obamacare and abolishing the IRS ain't all that tough."

Cruz was born December 22, 1970 in Calgary, Canada. Though some have raised questions about whether his foreign birth would preclude him from running for president, most analysts believe he's eligible -- he was a U.S. citizen at the time of his birth because his mom was born in the U.S. In a curious twist, his birthplace also made him a natural-born Canadian citizen, but Cruz renounced his Canadian citizenship last year.

His family moved in 1974 to Texas, where Cruz spent the rest of his childhood. He graduated valedictorian of his high school in 1988, received his undergraduate degree from Princeton University, and received his law degree from Harvard University. He clerked for a federal judge and then-Supreme Court Chief Justice William Rehnquist, advised the 2000 presidential campaign of George W. Bush, worked for Bush's Justice Department and was appointed Texas Solicitor General before eventually running for Senate.

It was likely no accident Cruz chose Liberty University to announce his run. He's has spoken at the university before, most recently in 2014 about the need to protect "religious liberty" in the face of a secularizing culture. The school was founded in 1971 by Jerry Falwell, an icon of the religious right, and Cruz has already signaled that he plans to tailor his message to the most conservative wing of his party.

"He hasn't really moved to the middle on any major issues," Texas-based Republican strategist Matt Mackowiak told CBS News last week. "He probably is the favorite among the grassroots, because he is a really solid conservative on all three legs of the stool - social, fiscal, and national security. No one speaks to the concerns of the grassroots with greater effect than Ted Cruz. He's the whole package."

He dwelt at length on the importance of his Christian faith in his speech at Liberty, recalling a point in his childhood when his father left him and his mother but returned after becoming a born-again Christian.

"There are people who wonder if faith is real," he said. "Were it not for the transformative love of Jesus Christ, I would not have been saved and I would have been raised by a single mom without my father in the household."

While his conservative appeals have made him a favorite among the activist set, there are questions about whether Cruz will be handicapped by his poor relationship with the establishment.

"There are questions about how much money he can raise, and about the breadth of his appeal, since he also has no shortage of opponents inside the party," Ramesh Ponnuru, a conservative analyst and friend of Cruz's since college, told CBS News.

To win the nomination, Cruz will have to navigate what looks to become a crowded GOP field, outflanking his rivals on the right while keeping an eye on establishment favorites like former Florida Gov. Jeb Bush.

He's warned Republicans against trusting the establishment to pick winners. Pointing to losses by 2008 nominee Sen. John McCain and 2012 nominee Mitt Romney, Cruz has urged the GOP to nominate a strong conservative or risk defeat for the third consecutive time.

"If we nominate a candidate in that mold, the same people who stayed home in 2008 and 2012 will stay home in 2016 and the Democrats will win again," Cruz told a South Carolina tea party convention in January.

But there are no shortage of potential candidates who could seek the conservative mantle. Cruz's Senate colleagues like Florida's Marco Rubio and Kentucky's Rand Paul are expected to launch their own bids in the coming weeks, and they've signaled they plan to aggressively court conservative voters themselves. Wisconsin Gov. Scott Walker has also emerged as an early favorite among some parts of the base, and more familiar names like former Arkansas Gov. Mike Huckabee and former Pennsylvania Sen. Rick Santorum are also likely to enter the fray.

Perhaps mindful of the hurdles ahead, Cruz was already making attempts to expand his mailing list before his speech was over on Monday,. "I'm gonna ask you to break a rule today and take out your cell phones and text the word 'constitution' to the number 33733," he told the audience at Liberty. "You can also text 'imagine' - we're versatile."