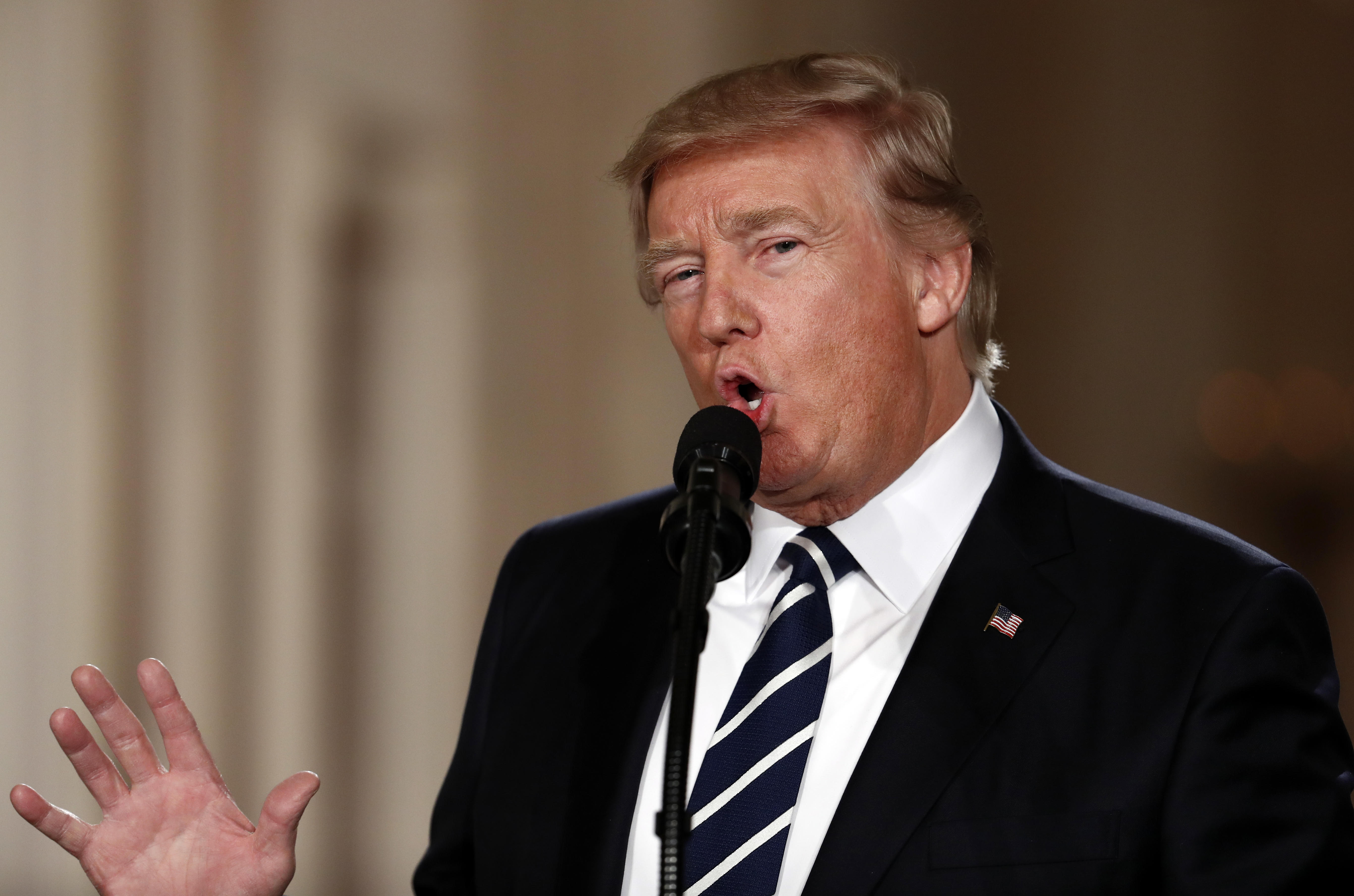 Supreme Court nominee Neil Gorsuch has testified at his confirmation hearings for one long day -- Now comes round two, and then the witnesses -- four panels of outside witnesses brought in by Republicans and Democrats will testify about Gorsuch, beginning at 9:30 a.m.

GOP health-care bill: Will it pass? The whip count

Here’s CBS News’ list of the House Republicans who at this moment say they cannot support the bill in its current form. It’s a list that’s subject to change, with a lot of arms to be twisted and horses to be traded in the next couple of days. We will be updating the regularly, if and when members decide on how they’re voting or change their minds.

Trump communications may have ended up in “incidental collection,” says intel chair

House Intelligence Committee Chairman Devin Nunes revealed Wednesday that it’s possible that President Trump’s personal communications might have been picked up by the intelligence community through “incidental collection.”

Speaking to reporters on Capitol Hill, the California Republican said that he learned of “significant developments” that he’s now “alarmed” by since his panel heard testimony Monday from FBI Director James Comey and National Security Agency Director Admiral Mike Rogers.

President Trump will travel to Brussels for May NATO meeting

The White House has announced what is expected to be President Donald Trump’s first foreign trip.

Press Secretary Sean Spicer says the president will travel to Brussels, Belgium, on May 25 for a meeting with the North Atlantic Treaty Organization heads of state.

Liberty University President Jerry Falwell Jr. provided the details of the May 13 graduation ceremony in a statement Wednesday.

Falwell was a close ally to Trump during his campaign and told The Associated Press in January that he’d been asked to lead a presidential task force on higher education reform.

The president drops by a Women in Healthcare panel (11 a.m.), holds a legislative affairs listening session, (11:30 a.m.), and meets with members of the Congressional Black Caucus (3 p.m.)

Supreme Court nominee Neil Gorsuch is in for a long day of testimony at his confirmation hearings Tuesday. The chairman of the Senate Judiciary Committee, Chuck Grassley, indicated it would be a 10-hour day -- and that’s without including any breaks. Grassley plans to let each of the 20 senators on the committee question Gorsuch for a half-hour each.

His hearing begins at 9:30 a.m. Here’s our live blog of Day two of the Gorsuch hearings.

The FBI director confirmed Monday the bureau is investigating whether anyone in the Trump campaign colluded with Russia to sway the election. Here’s what we’ve learned so far -- beginning with the man who once ran the campaign.

One of Paul Manafort’s most vocal critics is in Ukraine. Politician Serhiy Leshchenko claims to have proof that Manafort, President Trump’s former campaign chairman, was part of a money laundering scheme in 2009. Leshchenko says a contract shows Manafort was paid $750,000 for about 500 computers.

Senators got their first opportunity to pose questions to President Trump’s Supreme Court nominee Neil Gorsuch on Tuesday on the second day of confirmation hearings.

Gorsuch mostly batted away Democrats’ efforts to get him to reveal his views on abortion, guns and other controversial issues, insisting he keeps “an open mind for the entire process” when he issues rulings. He answered friendly questions from majority Republicans in the same way as they tried to help him highlight his neutrality in face of Democratic attempts to link him to Mr. Trump, who nominated him.

President Trump told the House GOP conference that failure to pass their health-care bill would cost many of them their seats, if not Republican control of the House, a person in the room told CBS News.

On a trip to Capitol Hill Tuesday morning, the president, who was greeted by the conference with a loud and enthusiastic standing ovation, spent much of his time with them trying to convince them to vote for the GOP health care bill. He reminded them that many of them had been elected on their pledge to repeal and replace Obamacare. He told them, I honestly think many of you will lose your seats in 2018 if you don’t get this done.

Moreover, if the House doesn’t pass this bill, he predicted that Republicans would lose the House in 2018. The House is scheduled to vote on the Republican health-care bill, named the American Healthcare Act, on Thursday.

On the way into the Republican conference, asked whether he was confident the bill would pass the House, Mr. Trump responded, “Pretty much.” Another reporter asked him, “Do you have the votes?”

“I think so,” the president said.

In the past, Mr. Trump said the U.S. should have taken Iraq’s oil. Iraq was included in his original travel ban, though not in the second version. But despite these tensions, the two men will need to work together.

Ivanka Trump is working out of a West Wing office and will get access to classified information as a way of cementing her role as a powerful White House influence, though she’s not technically serving as a government employee, according to an attorney for the first daughter.

Since President Trump took office, his eldest daughter has been a visible presence in the White House, where her husband, Jared Kushner, already serves as a senior adviser. On Friday, she participated in a meeting on vocational training with the president and German Chancellor Angela Merkel.

White House Press Secretary Sean Spicer’s reference to an obscure law at Tuesday’s briefing left many members of the press corps scratching their heads — and turning to Google.

A reporter asked Spicer if President Donald Trump believes in the “deep state” — a conspiracy theory circulated among some Trump supporters that purports Obama holdovers in the federal government are attempting to undercut the president’s agenda.

“There are people that burrow into government after an administration — this has been going back since the beginning of time,” Spicer answered. “They used to call it ‘ramspecking.’”

A Virginia winery owned by President Donald Trump’s son has applied to hire foreign workers to pick grapes after the company was unable to find U.S. citizens who want the job.

Trump Vineyard Estates, better known as Trump Winery, has asked to bring in 29 workers this season through the federal H-2A visa program, The Daily Progress reported.

The Charlottesville-area winery is owned by Eric Trump, whose father has called on businesses to hire Americans.

The H-2A program enables agricultural employers who anticipate a shortage of domestic workers to bring foreign workers to the U.S. to perform agricultural labor or other temporary or seasonal services. To apply, employers say they’ve been unable to find American citizens to fill the jobs. At least three other local vineyards also applied to hire foreign workers.

Roger Stone denies colluding with Russia to meddle in 2016 election

Longtime GOP operative and Trump confidant Roger Stone on Tuesday doubled down on his assertion that he did not collude with Russia to meddle in the 2016 U.S. election.

“I have said that repeatedly and I say that again today,” Stone said in an interview on “CBS This Morning.”

Stone said he’s aware that he’s under investigation by the FBI, but that he has not spoken to the bureau. He said he is following the Senate Intelligence Committee’s request to preserve documents.

“I assume I have been under surveillance now for some time,” Stone said. “What probable cause there is, or what evidence that would dictate that, I don’t know.”

The White House is distancing itself from two former senior members of Donald Trump’s team, amid an FBI investigation into possible connections between Trump “associates” and Russia.

White House press secretary Sean Spicer on Monday referred to Trump’s former national security adviser, Michael Flynn, as a “volunteer of the campaign.” And he said Paul Manafort, who ran Trump’s campaign for months, “played a very limited role for a very limited amount of time.”

“And so to start to look at some individual that was there for a short period of time or, separately, individuals who really didn’t play any role in the campaign and to suggest that those are the basis for anything is a bit ridiculous,” he said.

President Trump is trying to give the teetering Republican plan to repeal and replace Obamacare a new sense of urgency by saying he’d like to get it over with and move on to the agenda items he cares about.

In an arena filled with thousands of cheering Kentuckians Monday evening, the president tied the future of the House-crafted health care proposal to his ability to fulfill other campaign pledges, like reducing taxes and renegotiating trade deals.