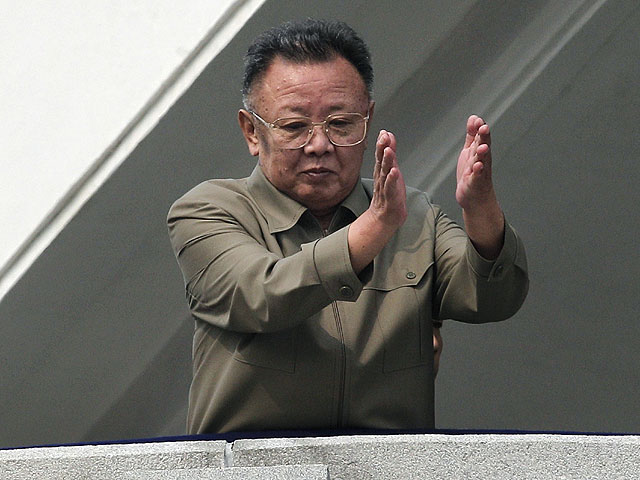 BERLIN - World governments are viewing the death of North Korean leader Kim Jong Il with wary optimism — a possibly destabilizing moment for the region as power passes to his son but also an opportunity for a new diplomatic start.

North Korea's past behavior has been notoriously erratic, making it difficult to predict the course it will choose. Japan and South Korea quickly held emergency meetings, and world leaders tried to convince the isolated country to open up more to the rest of the world about its nuclear intentions.

Britain's Foreign Secretary William Hague expressed his condolences but added "this could be a turning point for North Korea" as Kim Jong Un takes over as supreme leader.

"We hope that their new leadership will recognize that engagement with the international community offers the best prospect of improving the lives of ordinary North Korean people," Hague said in a statement, encouraging the country to resume international talks on its nuclear capabilities.

"It is, of course, an opportunity that things there will change," spokesman Dirk Augustin told reporters. "We have clear demands to North Korea: It must abandon its nuclear program; the catastrophic situation of the people must improve; and political and economical reforms must be implemented."

Kim's death was announced Monday by North Korean state television, two days after he died at age 69 of a heart attack.

During his 17 years in power, Kim's pursuit of nuclear weapons and his military's repeated threats to South Korea and the U.S. stoked fears that war might again break out or that North Korea might provide weapons of mass destruction to terrorist movements.

South Korea put its military on "high alert" and President Lee Myung-bak convened a national security council meeting. The Korean peninsula remains technically in a state of war more than 50 years after the Cold War-era armed conflict ended in a cease-fire.

Two South Korean military officials said they couldn't immediately confirm the report, saying to do so would breach a policy of not commenting on intelligence matters.

Both said any firing would be part of a routine drill and have little relation to Kim Jong Il's death. They both spoke on condition of anonymity, citing policy.

He "instructed us to be best prepared in case of any unexpected development" while top officials meet to discuss the situation, Chief Cabinet Secretary Osamu Fujimura told journalists in Tokyo.

"First of all we hope that this sudden development would not give adverse impact on the peace and stability of the Korean Peninsula," he said.

The White House said it was in constant contact with South Korea and Japan, but offered no substantive comment on the implications of Kim's death, saying only that President Barack Obama "reaffirmed the United States' strong commitment to the stability of the Korean peninsula and the security of our close ally, the Republic of Korea."

Kim's death comes as the Obama adminstration had been expected to decide, possibly as early as Monday, whether to try to re-engage the reclusive country in nuclear negotiations and provide it with food aid, U.S. officials said Sunday. The officials, who spoke on condition of anonymity due to the sensitivity of the situation, said Kim's death would likely delay the effort.

The administration had been poised to announce a significant donation of food aid to North Korea this week, the first concrete accomplishment after months of behind-the-scenes diplomatic contacts between the two wartime enemies, according to sources close to the negotiations. And, an agreement by North Korea to suspend its controversial uranium enrichment program was expected to follow within days, the sources said.

Suspension of uranium enrichment by North Korea had been a key outstanding demand from both the U.S. and South Korea of the North, which has tested two atomic devices in the past five years. Recent food talks in Beijing yielded a breakthrough on uranium enrichment, the sources said.

Australia's Foreign Minister Kevin Rudd said Kim's death brings the situation to "one of those critical junctures" and "an exceptionally difficult period of transition."

"It is critical that everybody exercises appropriate calm and restraint in what is a important development in terms of the overall stability of the region and the security of us all," Rudd said.

The International Atomic Energy Agency had no immediate comment on how nuclear talks might proceed under a new government.

In China, a key North Korean ally, Foreign Ministry spokesman Ma Zhaoxu called Kim a "great leader" and said China believes the North Korean people will "turn their grief into strength, unite as one, and continue to advance the cause of North Korean socialism."

But he also added that Beijing would continue to offer its support and make "active contributions to peace and stability on the Korean peninsula and in this region."

China has long sought to convince North Korea of the need for economic reform, and Kim's death raises hopes that Pyongyang might now take heed of such advice, said Korea expert Lu Chao at China's Academy of Social Sciences in Liaoning province, which borders North Korea.

"There will definitely be change, good and positive change," Lu said. "North Korea will work more closely with the global community toward the peace and stability of the Korean Peninsula."

"If North Korea continues to be an international pariah, China will continue to benefit from its current leverage," Yu said. "If North Korea becomes less intransigent and slightly more open, then China will be greatly worried about the possible warming-up, or even reunification, between North and South Koreas."

Moscow said it hoped for continued good relations with Pyongyang.

"We have friendly relations with North Korea," Russian Foreign Minister Sergey Lavrov said, according to the RIA Novosti news agency. "We hope that this loss that the Korean people have suffered will not have a negative impact on the development of our relations."

With so many questions in the air at the moment, most countries are waiting to see what comes next.

"The death of a dictator is always a period of uncertainty for a dictatorship," said Swedish Foreign Minister Carl Bildt on Twitter. "And North Korea is the hardest dictatorship in our time."