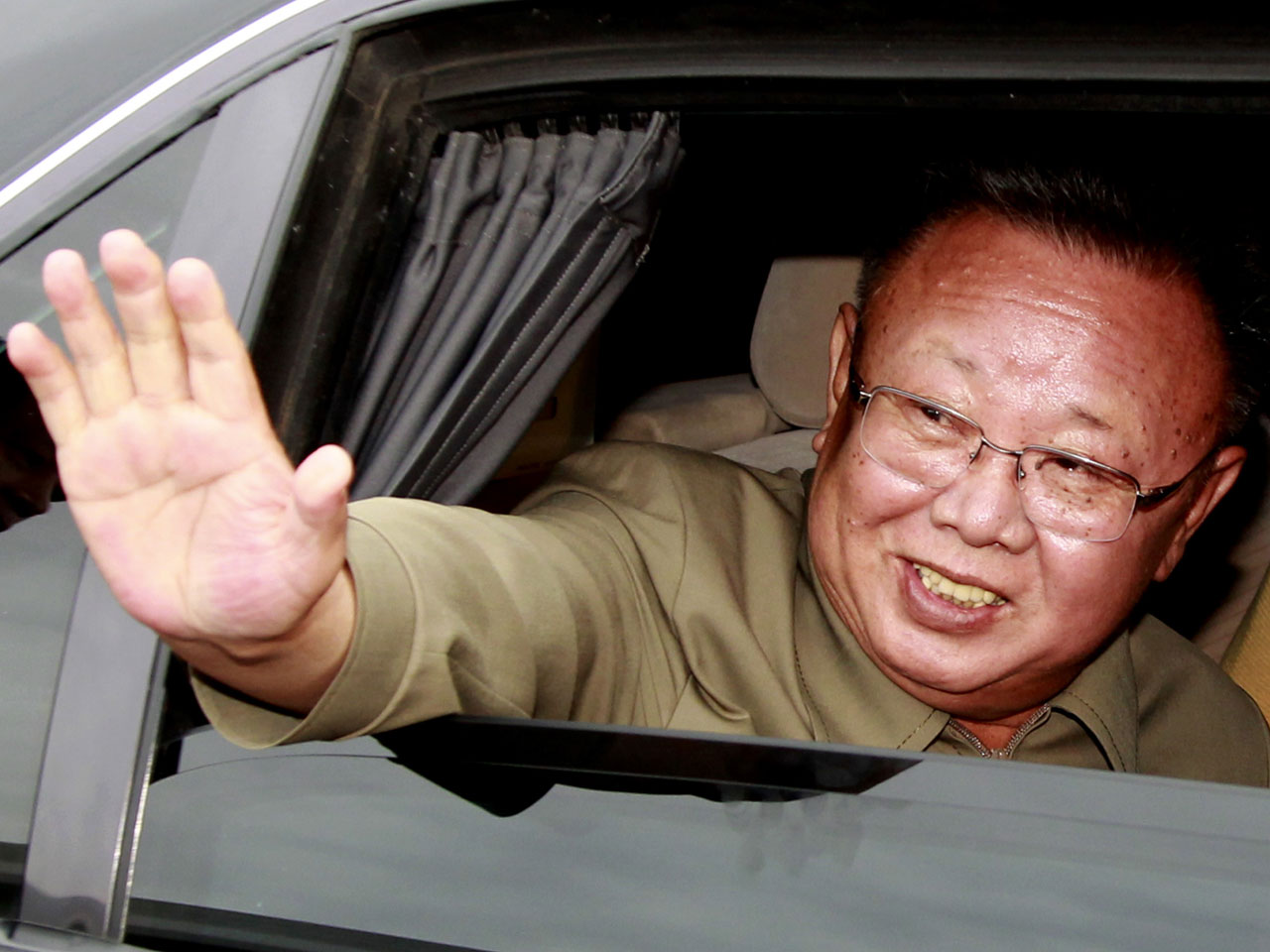 PYONGYANG, North Korea - Even as the world changed around him, North Korean leader Kim Jong Il remained firmly in control, ruling absolutely at home and keeping the rest of the world on edge through a nuclear weapons program.

Inheriting power from his father in 1994, he led his nation through a devastating famine while frustrating the U.S. and other global powers with an on-again, off-again approach to talks on giving up nuclear arms in return for energy and other assistance. Kim was one of the last remnants of a Cold War-era that ended years earlier in most other countries.

His death was announced Monday by state television two days after he died. North Korea's news agency reported that he had died at 8:30 a.m. Saturday after having a heart attack on a train, adding that he had been treated for cardiac and cerebrovascular diseases for a long time. He was 69.

CBS News correspondent Celia Hatton reports news of Kim's death was met with a flood of televised emotion in North Korea, as state TV showed orderly columns of state officials weeping dramatically, and ordinary North Koreans beside themselves in apparent grief on the streets of Pyongyang.

In South Korea, however, like much of the rest of the world, the news provoked concern. Hatton reports that South Korea put its military on high alert Monday, even calling off-duty troops back to work in the event of any provocations from the North.

South Korea's Yonhap news agency reported later Monday that the North had conducted at least one short-range missile test. Two South Korean military officials said they couldn't immediately confirm the report, saying to do so would breach a policy of not commenting on intelligence matters.

Both said any firing would be part of a routine drill and have little relation to Kim's death. They both spoke on condition of anonymity, citing policy. Yonhap cited unidentified government and military officials as saying the test occurred off the east coast.

Kim, who reputedly had a taste for cigars, cognac and gourmet cuisine, is believed to have suffered a stroke in 2008 but he had appeared relatively vigorous in photos and video from recent trips to China and Russia and in numerous trips around the country documented by state media.

His longtime pursuit of nuclear weapons and his military's repeated threats to South Korea and the U.S. stoked worries that fighting might break out again on the Korean peninsula or that North Korea might provide weapons of mass destruction to terrorist movements. The Korean War ended more than 50 years ago in a cease-fire, and the two sides remain technically in a state of war. (Click the player at left for more on Kim's history of tests and threats from CBS News foreign affairs analyst Pamela Falk)

Kim Jong Il, who took power after the death of his father, unveiled his third son as his successor in September 2010, putting the twenty-something Kim Jong Un in high-ranking posts. On Monday, the North Korean news agency dubbed the son a "great successor" as the country rallied around him.

Few firm facts are available when it comes to North Korea, and not much is clear about Kim Jong Il, the man known as the "Dear Leader."

North Korean legend has it that Kim was born on Mount Paektu, one of Korea's most cherished sites, in 1942, a birth heralded in the heavens by a pair of rainbows and a brilliant new star. Soviet records, however, indicate he was born in Siberia in 1941.

His father, Kim Il Sung, is the still-revered founder of North Korea. The elder Kim fought for independence from Korea's colonial ruler, Japan, from a base in Russia for years. He returned to Korea in 1945, emerging as a communist leader and becoming North Korea's first leader in 1948.

He meshed Stalinist ideology with a cult of personality that encompassed him and his son. Their portraits hang in every building in North Korea, and every dutiful North Korean wears a Kim Il Sung lapel pin.

Kim Jong Il, a graduate of Pyongyang's Kim Il Sung University, was 33 when his father anointed him his eventual successor.

Even before he took over, there were signs the younger Kim would maintain — and perhaps exceed — his father's hard-line stance.

South Korea has accused Kim of masterminding a 1983 bombing that killed 17 South Korean officials visiting Burma, now known as Myanmar. In 1987, the bombing of a Korean Air flight killed all 115 people on board; a North Korean agent who confessed to planting the device said Kim had ordered the downing of the plane.

When Kim came to power in 1994, he had been groomed for 20 years to become leader. He eventually took the posts of chairman of the National Defense Commission, commander of the Korean People's Army and head of the ruling Worker's Party. His father remained as North Korea's "eternal president."

He continued his father's policy of "military first," devoting much of the country's scarce resources to its troops — even as his people suffered from a prolonged famine — and built the world's fifth-largest military.

Alarmed, regional leaders negotiated a disarmament-for-aid pact that the North signed in 2007 and began implementing later that year. The process has since stalled, though diplomats are working to restart negotiations.

Following the famine, the number of North Koreans fleeing the country rose dramatically, with many telling tales of hunger, political persecution and rights abuses that North Korean officials emphatically denied.

Kim often blamed the U.S. for his country's troubles and his regime routinely derides Washington-allied South Korea as a puppet of the Western superpower.

Former U.S. President George W. Bush described Kim as a tyrant. "Look, Kim Jong Il is a dangerous person. He's a man who starves his people. He's got huge concentration camps. And ... there is concern about his capacity to deliver a nuclear weapon," Bush said in 2005.

Defectors from North Korea describe Kim as an eloquent and tireless orator, primarily to the military units that form the base of his support.

He also made numerous trips to factories and other sites to offer what North Korea calls "field guidance." As recently as last week, the North's news agency reported on trips to a supermarket and a music and dance center.

"In order to run the center in an effective way, he said, it is important above all to collect a lot of art pieces including Korean music and world famous music," the Korean Central News Agency story read in part.

The world's best glimpse of the man came in 2000, when a liberal South Korean government's conciliatory "sunshine" policy toward the North culminated in the first-ever summit between the two Koreas. A second summit was held in 2007 with then South Korean President Roh Moo-hyun.

Kim was said to have wide interests, including professional basketball, cars and foreign films. He reportedly produced several films, mostly historical epics with an ideological tinge.

A South Korean film director claims Kim had him and his movie star wife kidnapped in the late 1970s, spiriting them to North Korea to make movies for a decade before they managed to escape during a trip to Austria.

Kim rarely traveled abroad and then only by train because of an alleged fear of flying, once heading all the way by luxury rail car to Moscow, indulging in his taste for fine food along the way.

One account of Kim's lavish lifestyle came from Konstantin Pulikovsky, a former Russian presidential envoy who wrote the book "The Orient Express" about Kim's train trip through Russia in July and August 2001.

A Japanese cook later claimed he was Kim's personal sushi chef for a decade, writing that Kim had a wine cellar stocked with 10,000 bottles, and that, besides sushi, Kim ate shark's fin soup — a rare delicacy — weekly.

"His banquets often started at midnight and lasted until morning. The longest lasted for four days," the chef, who goes by the pseudonym Kenji Fujimoto, was quoted as saying.

Kim is believed to have curbed his indulgent ways in recent years and looked slimmer in more recent video footage aired by North Korea's state-run broadcaster.

Disputing accounts that Kim was "peculiar," former U.S. Secretary of State Madeleine Albright characterized Kim as intelligent and well-informed, saying the two had wide-ranging discussions during her visits to Pyongyang when Bill Clinton was U.S. president. "I found him very much on top of his brief," she said.

His eldest son, Kim Jong Nam, who is about 40, is believed to have fallen out of favor with his father after he was caught trying to enter Japan on a fake passport in 2001 saying he wanted to visit Disney's Tokyo resort.

His two other sons by another woman, Kim Jong Chol and Kim Jong Un, are in their 20s. Their mother reportedly died several years ago.