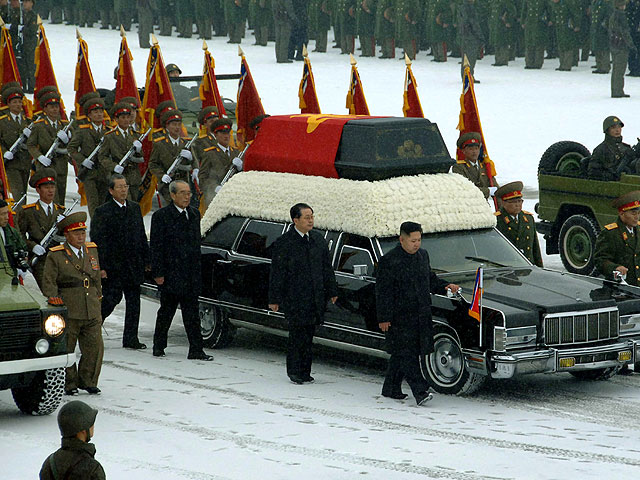 PYONGYANG, North Korea - North Korea's next leader escorted his father's hearse in an elaborate state funeral on a bitter, snowy day Wednesday, bowing and saluting in front of tens of thousands of citizens who wailed and stamped their feet in grief for Kim Jong Il.

Son and successor Kim Jong Un was head mourner on the gray day in Pyongyang, walking with one hand on the black hearse that carried his father's coffin on its roof, his other hand raised in salute, his head bowed against the wind.

At the end of the 2 1/2-hour procession, rifles fired 21 times as Kim Jong Un stood flanked by the top party and military officials who are expected to be his inner circle of advisers. Kim then saluted again as goose-stepping soldiers carrying flags and rifles marched by.

Although analysts say Kim Jong Un is on the path toward cementing his power and all moves in North Korea so far — from titles giving him power over the ruling party and military and his leading position in the funeral procession — point in that direction, his age and inexperience leave questions about Kim's long-term prospects. Whereas his father was groomed for power for 20 years before taking over, the younger Kim has had only about two years.

He also faces the huge challenges of running a country that struggles to feed its people even as it pursues a nuclear weapons program that has earned it international sanctions and condemnation.

Kim Jong Il — who led with absolute power after his father Kim Il Sung's death in 1994, through a famine that killed hundreds of thousands and the pursuit of nuclear and missile programs — died of a heart attack Dec. 17 at age 69.

Mourners in parkas lined the streets of Pyongyang, waving, stamping and crying as the convoy bearing his coffin passed. Some struggled to get past security personnel holding back the crowd.

"How can the sky not cry?" a weeping soldier standing in the snow said to state TV. "The people ... are all crying tears of blood."

A large challenge for North Korea's propaganda apparatus will be "to counter the public's perception that the new leader is a spoiled child of privilege," said Brian Myers, an expert on North Korean propaganda at Dongseo University in Busan, South Korea.

"Having Kim Jong Un trudge mournfully next to the hearse in terrible weather was a very clever move," Myers said.

Even as North Koreans mourned the loss of the second leader the nation has known, the transition of power to Kim Jong Un was well under way. The young man, who is in his late 20s, is already being hailed by state media as the "supreme leader" of the party, state and army.

Kim wore a long, dark overcoat as he strode alongside his father's hearse accompanied by top party officials behind him and key military leaders on the other side of the limousine — a lineup that was a good look at who will be the core leadership in North Korea.

North Korea now turns to Thursday's memorial ceremony. Although there will be tributes to Kim Jong Il, the country will be turning toward Kim Jong Un, analysts said.

"The message will be clear: Kim Jong Un now leads the country and there is no alternative," said Kim Yeon-su, a North Korea expert at the state-run Korea National Defense University in South Korea.

There will also be more attention paid to the inner circle forming around Kim Jong Un.

On Wednesday, he was accompanied by Jang Song Thaek, Kim Jong Il's brother-in-law and a vice chairman of the powerful National Defense Commission, who is expected to be crucial in helping Kim Jong Un take power.

The early part of Wednesday's funeral ceremony was shrouded in secrecy, as in 1994, when Kim Il Sung died. Back then, Kim Jong Il and top officials held a private, hourlong ceremony inside the Kumsusan palace before the procession through the city, according to his official biography.

Pyongyang's foreign diplomats were invited to attend the procession, though few other outsiders appeared to be allowed into the country for the funeral. One foreign diplomat in Pyongyang, who asked not to be named because of the sensitive nature of her work, said funereal music played and people wept as the convoy left Kumsusan followed by a large number of vehicles and army jeeps.

After showing taped footage of mourners and documentaries of Kim Jong Il, state TV began airing the procession, showing cars moving slowly through the snowy city, led by a limousine carrying a huge portrait of a smiling Kim Jong Il.

Wednesday's procession had a stronger military presence than 1994.

Kim Jong Il, who ushered in a "military first" era when he took power, celebrated major occasions with lavish, meticulously choreographed parades designed to show off the nation's military might, such as the October 2010 display when he introduced his son to the world.

Kim Jong Un was made a four-star general and appointed a vice chairman of the Central Military Commission of the ruling Workers' Party last year.

After the funeral, the young Kim is expected to solidify his power by formally assuming command of the 1.2 million-strong military, and becoming general secretary of the Workers' Party and chairman of the party's Central Military Commission, said Yoo Ho-yeol, a professor at Korea University in South Korea.

Kim Jong Il's two other sons, Kim Jong Nam and Kim Jong Chol, were not spotted at the procession.